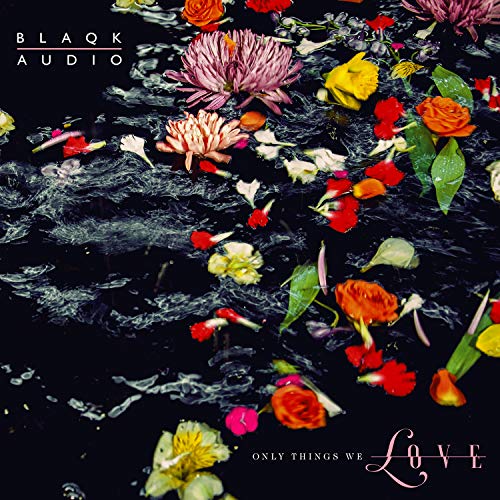 It seems remarkable that of all the side projects that Davey Havok has featured in over the years, 3 of which include his partner in crime Jade Puget, that Blaqk Audio is the one that has soldiered on.

It speaks volumes that Only Things We Love is the fourth studio album by the duo. It shows a commitment to this band and a sense that this is where their musical passions lie. It’s a shame then that for all intents and purposes Blaqk Audio have become somewhat vapid and one dimensional over time.

Both Davey and Jade have made no secret over the years that they owe a debt musically to the new romantic and new wave scenes alongside the punk and hardcore scene they came from. But there is a difference between owing a debt and turning yourself into a parody of an entire scene.

It doesn’t help matters that the album peaks with the second track  The Viles, which feels like classic Blaqk Audio and recalls memories of their debut. It’s a glorious synthy pop gem that will get stuck in your head for days, but it’s a shining moment in an otherwise bland and directionless album.

Only Things We Love is an album that sets a tone and is happy to just stay there. It never picks up the pace and eventually becomes musical wallpaper. Davey has always been a versatile and unique vocalist, none of that comes through here, as his voice feels very monotone throughout. Summer’s Out of Sight and Maker are exceptions to the rule with a little bit of vocal heft  being employed to elevate those songs beyond average but it’s too brief to really make a dent in the overall quality of the album as a whole.

Musically this album comes across as a patchwork of 80’s new wave moments remixed through the prism of revivalist culture. It’s devoid of any real creativity feeling like large chunks of it have been remixed from far more interesting and accomplished artists.

Above all else Only Things We Love displays a very steep decline in quality from a band that seems to have exhausted all their creatity. You be much better of finding yourself a best of the 80s playlist on Spotify and seeing how this type of music should sound when done properly.