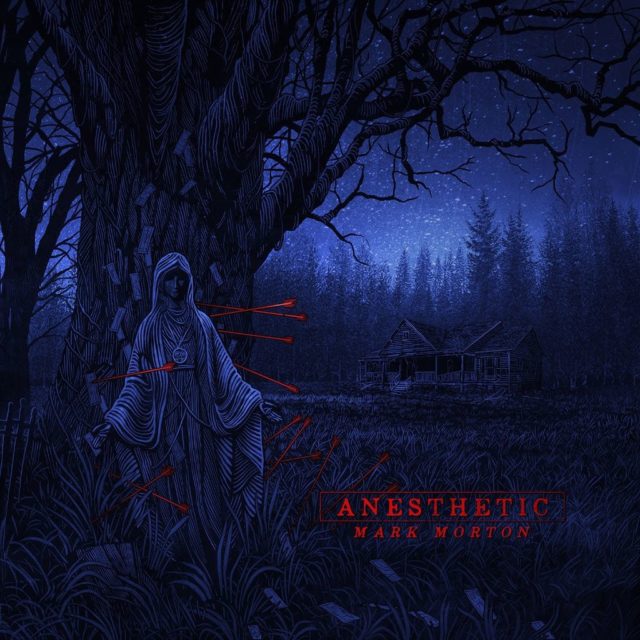 Lamb of God resident axe slinger Mark Morton is the lastest musician to step out from the comfort zone of a well established act and throw his hat into the solo album ring. One would argue that Lamb of God are one of the most consistent and successful metal bands of their generation, so naturally when this album was announced both curiosity and anticipation were justifiably high.

Anesthetic, the resulting album features 10 tracks and a raft of guest singers from across the rock and metal spectrum, and it offers up more than a few surprises. The first thing you notice is the quality throughout, there is very little in the way of filler here, which I think stems from choosing artists that occupy the same musical space and Morton using himself as the musical backbone. Doing this keeps a uniformity to things and means that things don’t deviate too wildly into mixed bag territory.

Kicking off with the first track to feature posthumous vocals from the late Chester Bennington, Cross Off is an emotional gut punch that sets the bar exceptionally high from the get go, whilst also gifting the listener with a fully unrestrained Chester vocal filled with passion and energy set against one of the heaviest riffs ever matched to his voice. After One More Light and the lighter moments in the latter part of his career it’s refreshing and cathartic to hear him go back to his more full blooded roots. It serves as an important reminder of his immense talent as well as a eulogy for a much loved and missed artist.

Jacoby Shaddix takes the reigns on the swaggering Sworn Apart which is a raging rock number that has King Kong sized balls and it lets them hang out. This is a fantastic marriage of artist and material and showcases why Jacoby is one of the greatest frontmen in the game and given his recent output in Papa Roach it’s also nice to hear him take things up another level and cut loose here.

After an explosive twofer the bluesy Axis featuring Mark Lanegan comes breezing in and slows the pace a little, serving as somewhat of a pallette cleanser and allows the listener a moment to breathe amongst the more high octane stuff. The Never featuring Testament’s Chuck Billy is potentially the best song never written by his day job, an all out thrash assault that sounds like it was directly lifted from the 80’s Bay Area scene. It has a frantic pace and a groove that is reminiscent of Mark Morton and his day job with Lamb of God giving it some serious heft, making it one of the album’s stand outs.

My feelings on Myles Kennedy have been well documented over the years. I have made no secret out of the fact that I am not massively taken with him, so his inclusion on this album was initally a source of trepidation for me, so imagine my surprise when Save Defiance, the track he guests on ended up being one of my favourites here. The track itself is very cinematic in nature and has a real classic rock feel to it, but it provides Myles an opportunity to really open his voice up against some slightly heavier riffing and here his vocals have a little extra bite to them. This is single handedly one of his most impressive vocals from any of his most recent work and one that thoroughly surprised and delighted me in equal measure.

Singer-songwriter Naeemah Maddox turns in a beautiful performance on the album’s softest track Reveal, that is also one of it’s hidden gems. It displays not only the incredible range that Mark has as a guitar player and artist but also the instincts he possesses when choosing who to collaborate with and in this case especially it pays dividends.

The album’s true surprise comes towards the end of the album which features Mark himself taking to the mic and delivering vocals on Imaginary Days. He has a confident and powerful voice full of range and depth, lending the track an assured edge and one that feels authentic and full of the vision that runs through the entirety of the album. It opens some interesting possibilities moving forward and begs the question as to whether we could see the Axe man move to full time vocalist should this album ever recieve a follow up.

The albums closing track The Truth is Dead features Lamb of God frontman Randy Blythe alongside Arch Enemy frontwoman Alissa White-Gluz and as you would expect it’s the most Lamb of God sounding song on the album. It proves that even without the rest of the band the chemistry between Mark and Randy is still very much there, and Alissa adds a little extra punch with a largely clean vocal that works to help compliment and enhance the harsh brutality from Randy and closes the album in an explosive fashion.

Anesthetic is a high quality album from one of the best riff writers in the game featuring a who’s who of rock and metal vocalists that not only gives us an insight into the mind of an artist but also provides a valuable reminder and showcase of what all of these amazing artists are capable of with the right material. If this ends up being a one off release from Mark Morton or leads to more albums down the road, only time will tell, but it’s an album that is definitely deserves your attention and time.