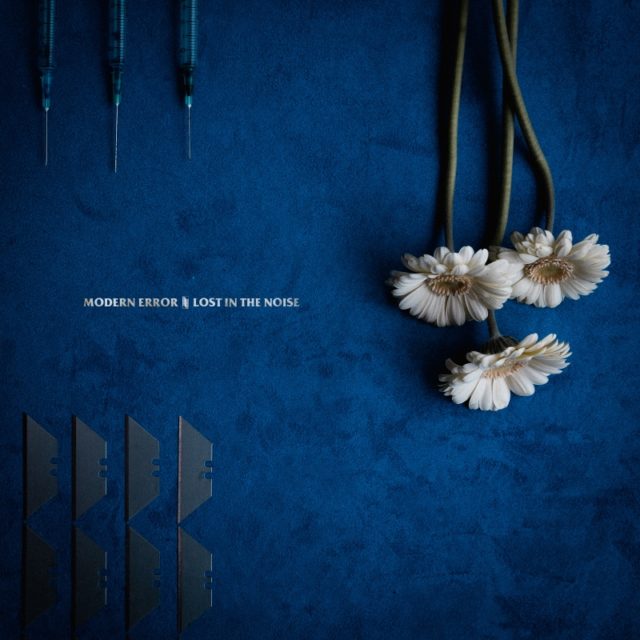 Metalcore is a very different beast to its original guise. Compared the heady days of the pioneering work of Vision of Disorder and Integrity, the subgenre bears little resemblance to its former form. There’s a very valid point to be argued that this is a regression. The distinction often has to be made for the sake of pedantry that there is a cut off point between Metalcore and modern Metalcore, though scholars will agonise over when exactly this seismic shift took place. Irrespective, the new album from Modern Error definitely belongs in the latter category.

Lost in the Noise opens in fairly standard fashion given the subgenre within which it exists. There’s thrashing guitars played in a minor key with emotionally drab vocals screamed over top before a clean and melodic chorus clicks things into place. Buried and Blue is very easy to anticipate but still reasonably enjoyable as it bounces between its warring styles. Hardly an inspired start. Funeral Verse stands as something of a ballad and comes surprisingly early on in proceedings. Far more gentle than its predecessor, the song slowly lilts through the emotive narrative of existentialism and displacement.

Lyrically the album is an attempt at foraying into the conceptual. Written as a triptych it focuses on lack of belief, loss of purpose and insecurity as well as separating from the idea of this self. Essentially it examines the toxicity of the human condition and a feeling of not wishing to be a part of the world. This does absolutely nothing to break the mold of the genre, and though presented with an enumerated vocabulary, it is the same standard fare that makes up the majority of modern Metalcore. Modern Error’s soul searching barely scratches the surface.

The rest of the album follows the template outlined by its opening songs. There’s no musical experimentation beyond some electronic sounds and synthesisers added to Separation Scars and Self Synthetic, and every song follows the harsh verse/clean chorus blueprint. It’s an incredibly predictable journey with no turns taken and no toes dipped in the water of interesting musicality.

There is nothing intrinsically bad about Lost in the Noise, bar the overwrought and unconvincingly emotional vocal performance, but there is absolutely nothing exciting or investing either. It fails to arrest its audience and is a truly dull affair. The saving grace is that there is nothing abhorrent to really kick off about, nothing to vilify about this release. It stands out as completely inoffensive and entirely uninspiring. Beige set to music.

Lost In The Noise is out now, self released by the band.