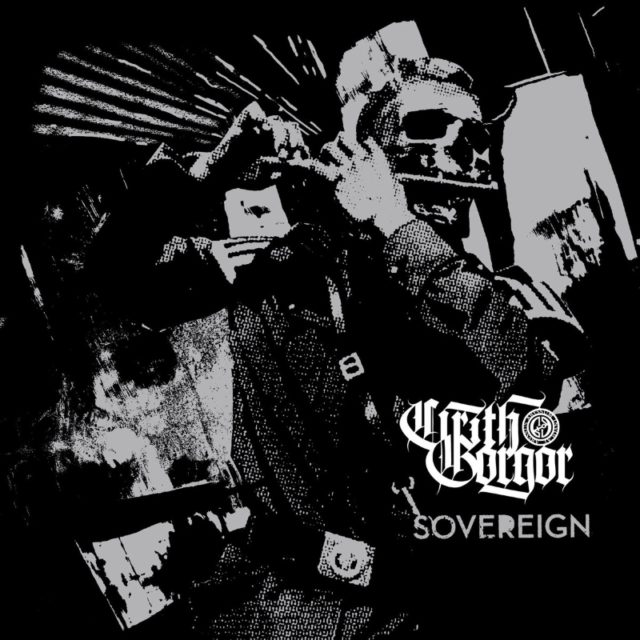 As the sound of waves raging against rocks echoes out into the void, Funeral March For Modern Man, the introductory song for Cirith Gorgor’s latest album, Sovereign, begins. It is a melancholic and elegiac, stunted piece that is somewhat hopeful in its harmonies and stringed accompaniment. It is the inly moment of optimism in the album. As it ends the album-proper begins in ferocious fashion. Hellbound is a blast beating, thrashing monster of a song that calls to mind the more recent work of luminaries such as Behemoth. It’s not so much straight black metal as it is a blackened take on thrash, soaring in its execution to infernal levels.

This basically sets the scene for the album as a whole; an ugly piece of competently played blackened music that is unrelenting in its spiteful nature. The title track has a straightforward stomp to it that is immediately headbangable, and continues the aural assault laid out by its predecessors. This is perhaps a sticking point of the album as there is something of a lack of dynamism in the music on offer: Beyond tempo changes, the album sticks fairly rigidly to one note.

The album itself does a more than admirable job of conveying the quintessential black metal ethos; it is concerned primarily with death and human suffering, all things evil and twisted beyond humanity. However it does stray a little close to the mark in some of its subject matter: With Lords of Chaos bringing the dark side of black metal back into the public consciousness alongside the domestic terrorism of the Louisiana Church burnings being egregiously linked to the genre, the calls for “segregation” and “annihilation” feel more insipid and unsettling than being merely tokenistic conjecture. They feel like an admission of support for black metal’s dark side.

All in all, Cirith Gorgor’s latest offering is one that will satiate the vast majority of black metal fans. It’s not an album that will set the world on fire, but it does a more than adept job of being intrinsically blackened. There is no room for sonic experimentation, but to tack such meandering on would detract from the core essence of what Sovereign is all about; black metal standing as an island, independent of outsider influence. It’s not a world beater, but it is a thoroughly unpleasant way to spend your time. Just the way it should be.