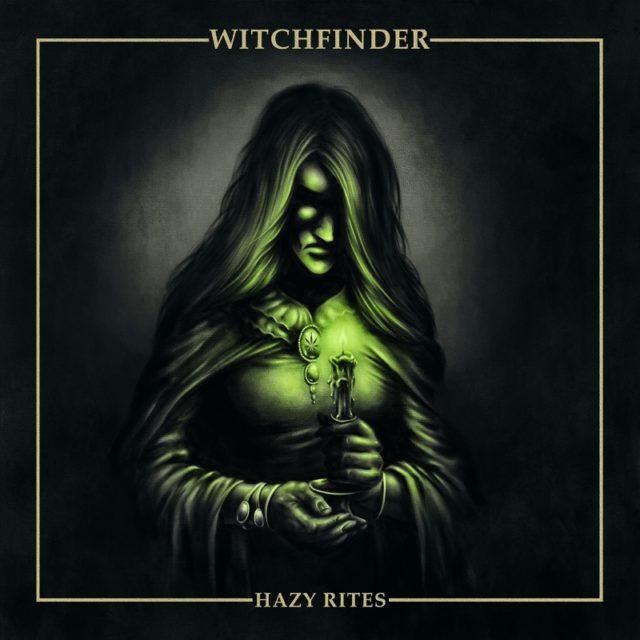 One of the world’s more looked down upon subgenres is stoner rock. Often perceived as the slacker cousin of Doom, the genre sometimes is unfairly maligned and pigeonholed as simplistic and unengaging for those not committed to hailing the leaf. This couldn’t be further from the truth: Stoner music has a breadth of musicality and can easily be enjoyed by even those most ardently opposed to recreational drugs. With their second LP French trio, Witchfinder are looking to make their mark in the world of everything bonged out with new album Hazy Rites.

Musically the album starts as it means to go on. Ouija kicks off proceedings with a lumbering, circular, grinding riff delivered with a guitar tone as clean as a heavy smoker’s ashtray. It is a pummeling and hypnotic piece of work, snaking through the eardrums and straight to the pleasure centre of the brain. This enrapturing feeling doesn’t dissipate across the album; it remains a near constant light in the haze of distortion-heavy throbbing low end strings., Sexual Intercourse stands out as a musical deviation in the record’s sound. It is a hip swinging, blues riffing hard Rock song guaranteed to get heads roundly banged.

Vocally the album has the typical heavy reverb effect one would expect of Doom metal or any derivatives thereof. They echo above the music in an ethereal manner and give an extra spaciousness to the songs. The higher pitched register calls to mind Monolord or Windhand, as opposed to say, Yob or Sleep. It’s a decent enough performance, though one that wears a bit thin come album’s end. For the majority of the running time the melodies and delivery sound identical from song to song with very occasional steps taken into harsher territories as a brief interlude.

With the LP’s finale, Dans L’Instant, a ten minute bruiser of a track, the band see themselves turning their hand to more sludge and hardcore influences. This is the blueprint that the band should follow moving forward as it is by far the most exciting moment of an already enjoyable ride. The song twists its way through myriad influences, all the while maintaining a core of stoner doom, so as not to betray their intrinsic sound.

Hazy Rites is an admirable trip, packed with moments guaranteed to get heads banging and teeth bared. It may not be perfect, but it’s certainly grand in its ambition and not a million miles from brilliant in its execution. The stoner influence runs deep in the veins of this French trio, and produces some stellar results, with riffs the size of mammoths pummeling the listener into a stupor. It just falls short of excellent in its overreaching for something currently unattainable to the band, but proves Witchfinder to be a very promising prospect with a very bright future indeed.

Witchfinder’s Hazy Rites is out now on Black Bow Records.