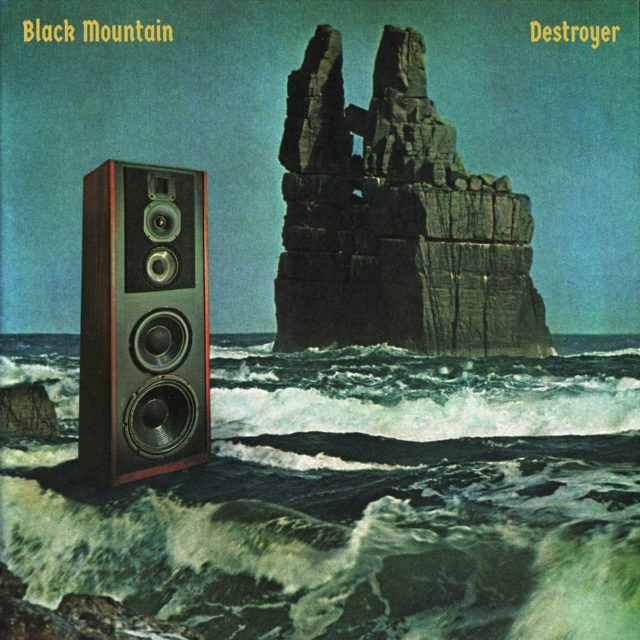 Few bands in recent memory have so successfully harnessed the best and most beloved tropes of 70’s rock as Vancouver outfit Black Mountain. Over the past 14 years they have produced four fantastic albums, peaking with 2016’s IV. Bookended by the incredible Mothers of The Sun and Space to Bakersfield tracks, the bands fantastic melange of pulsing psych, krautrock and classic rock riffery left you in no doubt, if there was any, that this was a band able to transcend their influences and create something truly, wonderfully, their own.

And so now we have Destroyer which finds a much different band left standing, with only main man, singer and guitarist Stephen McBean in complete control, with additional help from regular member Jeremy Schmidt, who added his trademark queasy, retro-futurist synths to McBean’s jams, bringing them to life.

The title refers to the old hot rod McBean took it upon himself to renovate after finally passing his driving test in 2017. I have to say I read all this with mild trepidation, as it began to sound like it may one of those terrible mid-life crisis albums male rock stars are prone to – naming no names. I’m pleased to say Destroyer is no ill-advised reinvention or morose pity party, although it lacks the scope and invention of IV. The press release tells us the album is a concept of sorts, based around ‘that first time behind the wheel of a hot rod’, but Licensed to Drive aside the songs do not make that explicit. It does, however feel like the work of a single-minded music lover, comfortable in his tastes, content to play around and celebrate his passions. Closing number FD 72 is a gloomy, glacial, Bowie in Berlin-esque finale which even name checks ‘the man who fell to earth’, quite happy to show it’s roots and celebrate it’s subject. The trouble is that whereas in the past the band have tried to rise above pastiche and add their own twist to their various influences, this time it seems McBean is happy to just wallow. Don’t get me wrong, this is a great collection of songs, it isn’t however any real sort of progression of the Black Mountain sound.

One influence that is more prevalent this time is NMOBHM with Future Shade’s fuzzy, classic rock riffs and muted vocals similar to Uncle Acid’s Wasteland lp. The witchy female backing vocals and needling synths are, at least, all typical Black Mountain sounds. It has the ambitious, grand-standing attitude of 70s stadium rock with the danker, weirder shades you usually get from the band. The aforementioned Licensed to Drive is also very rocking and has a chugging Judas Priest machismo with a dystopian edge.

Clearly unafraid to wedge tongue in cheek, McBean has even written a song called Horns Arising. Beginning with another huge fuzzy riff and Vocoder vocals (like a doom metal Mickey) it is brave in it’s no-fucks given eccentricity. As you grow tired of the form, untreated vocals bring passion and then it dips into unexpected folky reveries. As the immortal line “Horns arising on a lake of fire” is sung we head back into rock bombast, like some wiggy rock opera. Did I say this LP lacks ambition? Okay sometimes it’s crazy ambitious!

Best track on the LP may be High Rise – a big beat, post punk, glam stomp, carried on a hypnotic riff it sounds ready to absolutely slay live.
As a rock album Destroyer is one of the best I’ve heard all year. As a Black Mountain album it’s “merely” a very good one. Destroyer is tremendous, uncomplicated fun, but I’m hoping McBean can get a full band back with him next time and really push the envelope again.

Destroyer is released tomorrow (May 24th 2019) through Dine Alone Records.