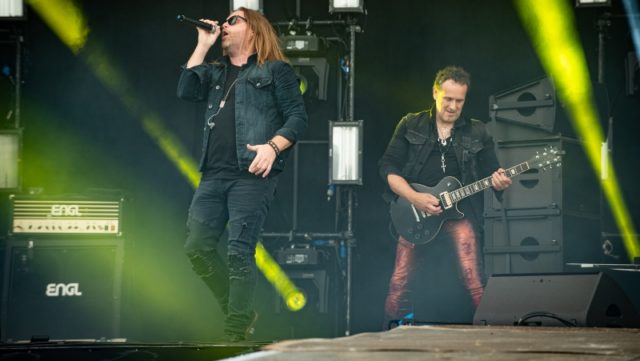 Being the first band of the weekend on the main stage at Download Festival takes a certain amount of balls, thankfully the rock and roll stalwarts that make up Last In Line have those balls and much more. We managed to catch up with Andrew Freeman and Vinnie Appice (vocalist and drummer respectively) a couple of hours after their set for a chat.

Rock Sins: So you smashed it earlier…

RS: That was a pretty good start to the weekend I thought – how did you feel about being the first band on? Did you feel any sort of pressure at all or is it just another gig these days?

AF: I dunno…(to Vinnie) What do you think?

VA: Well the nice thing is we got to do a soundcheck, because there was no one before us, whereas we’ve played these things before and had to go on almost cold, you know? So that was good and then there were a lot of people there! We were on that stage about half an hour prior and the doors opened, but there wasn’t anybody there, then within 20 minutes there were thousands of people.

RS: Am I right in thinking, the band started as more of a tribute to Ronnie James Dio and now you’ve started doing your own stuff?

VA: It started as “let’s have some fun and play”. Jimmy (Bain, bassist – now deceased) and Viv (Campbell, guitar) called and said “do you wanna jam in the rehearsal space?” and it was just the 3 of us and we had a good time. Then the next week I said “you know what? My friend Andy’s in town and he knows some Dio stuff”, so he came down and started singing it and it just came alive for everybody and we decided to do some shows. So it came together naturally, then the shows led to a record deal and then it became a band, you know? So it wasn’t any paper thing like “let’s get this guy, then let’s get this singer from this band…”

RS: And now you’ve got the imaginatively titled album II out – been well received?

VA: I don’t know how many it’s sold, but reviews are great…

AF: A C? Ha ha yeah I think we’re gonna start jamming ideas around the end of the summer. Not recording, just getting together and putting out some ideas

RS: Do you have like a recording process? Do you get in a room and jam and see what happens or do people come in with “I’ve got this song…”

AF: No we’re not allowed to do that, that’s kind of the rule of the band. We might come in with a riff or an idea, but it’s just…I know the word is thrown around a lot, but it just organically happens. The whole band organically happened, the song writing process organically happens… we don’t plan anything. It’s hard enough to plan to get time together, so…

VA: Actually that’s the way (awesome Black Sabbath album from when Vinnie and Ronnie were in the band and they didn’t have to call themselves Heaven & Hell just to appease someone’s wife – RS) Mob Rules was written.

VA: Nobody came in with a song, we just jammed, listened to riffs… I kept all the riffs on tapes and we made the album. And then (fucking awesome Dio album – RS) Holy Diver, same way. We’d jam, Ronnie would sing, I’d record it, I’d listen back and say “hey that’s good let’s work on that…” and that formula (worked) for many albums, we’d get together and that’s what we did. Everybody’s input… and this band anything goes.

AF:  The process is organic, but we are also very in-tune with the internet, so recording rehearsals…

RS: How modern of you!

RS: You just mentioned Holy Diver. I did sort of predict you would end on a Dio song and I thought it would either be Holy Diver or, maybe the slightly cheesy route of Last in Line, but you went for Rainbow in the Dark. Now, it was the best I’ve ever heard it by the way, but what made you pick that one over all the million other songs you could have ended on today?

VA: Well it’s probably the biggest song, it’s been in a couple of movies, it’s the biggest hit we ever had.

AF: Yeah me too! Tell them!

VA: We just got a request (to use it) in another movie that’s coming out, there was a Budweiser beer commercial in the states (at this point Vinnie Appice sings a bit of the advert to me)

VA: We need another beer commercial…but it’s just one of the bigger songs you know?

RS: You’ve been doing this for a while now, how’s touring for you these days? Back in the day it may have been a little more boozy for you, hedonistic… How is it now? Just do the show, chill out or is it “we’ll have a few beers, get a bit tipsy…”

VA: Well, you know, on the level we’re playing – clubs and theatres – what’s cool is we play and then hang out a little while everything’s loaded up then we leave. Nobody needs to be torn away from the bar. I’ve been in a band like that – Killdevilhill – and people couldn’t find them at the end of the show…

AF: It’s a very non-dramatic…we’re all on the same page. We had a member who was difficult, but he’s no longer difficult coz he’s not here anymore… it’s not fun. Especially for these guys in their career because it’s gotta be fun, not even fun, just a workable situation where we’re not pissed off every day…

VA: Makes it a LOT easier and we don’t waste the time.

RS: I dunno how much you’ve seen of out there, but some places are VERY muddy, so have you got any tips for festival goers out there?

AF: Err….what are they called “Wellingtons”?

AF: I learnt that today

RS: What are they called in America? “Gumboots” or something?”

RS: I thought that was a coat! So what have you got lined up next? What’s the rest of the year look like?

AF: Well we go home tomorrow and then Viv starts Def Leppard…well he starts Def Leppard today! (The Sheffield rockers headlined Downloads’ main stage the same day that Last in Line opened it – RS), Vinnie’s got a tour he’s doing doing some Black Sabbath stuff, I dunno what Phil (Soussan, bass) is up to, but I’m going to play with Lynchmob for the summer and then we pick it up again in September.

RS: Diamond Head have a new album, so…

VA: We’ll back in November though

RS: Before I let you go and we’ll say this quietly coz he’s stood behind you… please tell me you’re going to be at the side of the stage heckling Vivian tonight?

AF: Yeah…I mean sure! I don’t really wanna hang out with him all day! I mean I just heckled him for half an hour ON stage during our set! He’s a pain in the ass!

AF: Yeah how dare he! It’s more like The Vivian Festival. He’s either in the band or he’s playing with everyone today

RS: Last time Def Leppard were here he got on stage with Thin Lizzy

AF: He’s incorrigible! He’s like “oh is that a group of people? Should I go dance for them?” 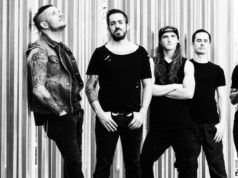