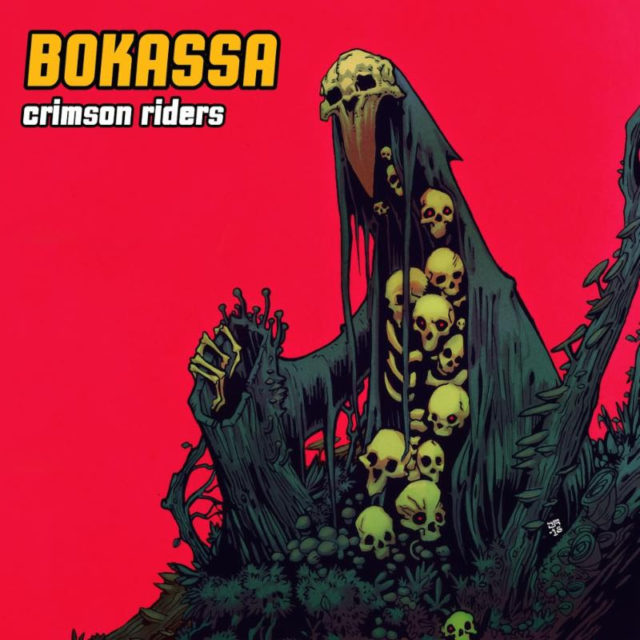 Bokassa have had a fantastic start to their career. As in, it literally is someone’s fantasy to be in their position. The Norwegian trio released Divide & Conquer to media and audience praise, and the band have played shows across most of the world. Above all, they were dubbed “my new favourite band” by the drumming demiurge himself, Lars Ulrich, and see themselves supporting the mighty Metallica on multiple dates across the UK and Europe. They are living the dream. So with their second album on the horizon, how does the future look for the plucky triumvirate?

The first thing to note about Crimson Riders is just how clean it all sounds. The production budget has clearly been significantly upped since the days of Divide & Conquer, as the subtlety of instrumentation is more apparent, while the vocals have a clarity to them that allows for the soaring melodies to take flight – namely the abundant “woah-ohs” and “ah-ahs”. There is a point to be made however that this isn’t totally a good thing; arguably the rough around the edges, punk sensibility of D&C has been rounded off making their self styled ‘stonerpunk’ feel that bit less inventive. The record feels distinctly more rock and roll with a stoner edge than it does the neologism of stonerpunk.

This waning punk idealism seems to stretch into the structure of the album. Divide & Conquer was a straightforward, non stop adrenaline ride of punchy riffs and a hard hitting rhythm section: Crimson Riders dares to adventure into different territories, with the desert jam, Vultures, and the stoner space rock finale, Immortal Space Pirate 2. Broadly speaking, Bokassa remain the same riff ripping rock merchants you will have fallen for on the first album. Every track follows a particular formula which speaks to a band who have nailed their own sound, even if the Hetfieldisms on Mouthbreathers Inc. are a little on the nose. However this lack of the same bright punk spark makes for an at times unsatisfying experience. The album is undeniably more sonically dynamic and ambitious than D&C, but the pacing feels less like it’s grabbing you by the throat and more as though it’s strongly insisting you follow along. While Bokassa are definitely doing more with their sound, it actually feels as though the album is less than its predecessor rather than a continuation or evolution.

The band have a clear penchant for riff writing. From the opening of Charmed & Extremely Treacherous, this is readily apparent as Jørn Kaarstad peels off the hugely satisfying riff, melting the faces of the unsuspecting. Vultures sees the band take an almost desert approach with this dust-swept semi ballad, and yet again we get some beautiful guitar phrases. The awkwardly named introductory track, Brologue features some appeasing notation, almost doomy in its execution, but it doesn’t especially set the tone for the rest of the album as a good intro should. The best riff of the album is one that calls to mind Converge’s Dark Horse, around halfway through the song Crimson Riders. Anything aping Converge well can only be a good thing, and when it comes to riffs, Bokassa do it as well as the rest. In fact every performance on the album is pretty much excellent, except for the blast beat attempt on Immortal Space Pirate 2, in which the drums appear to fail to keep up with the pace. The bass work on this album is enough to make any fellow player envious, but for those less inclined to the four string you’ll find it to be the subconscious driving force behind most of the music.

Lyrically the album is actually rather charming. Humorous at times, particularly in the tongue in cheek arrogance of Blunt Force Karma; “I am the greatest man alive”. At other times, particularly on Captain Cold One, it feels like a conversation with friends as Kaarstad namechecks Nickelback, Trivium, P!nk and Muse. Frankly the whole album resonates with a youthful exuberance. You can tell this band are hungry and have a fire in their bellies for greater success. Whether or not this album will do much to help them along with these grand ambitions remains to be seen. The music is more dynamic, but not hugely adventurous and feels less complete than the debut, though when it hits it hits hard. The pacing of the album feels odd, but the performances are brilliantly overstated and ambitious. Fans of Bokassa will be satisfied but not blown away, whereas new listeners will probably clutch onto this album with glee. Oddly enough, this is the album that will divide, but who can say whether or not it will conquer?

Bokassa’s Crimson Riders is released on the 21st of June. 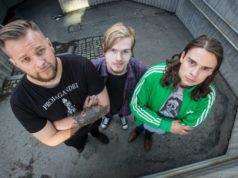