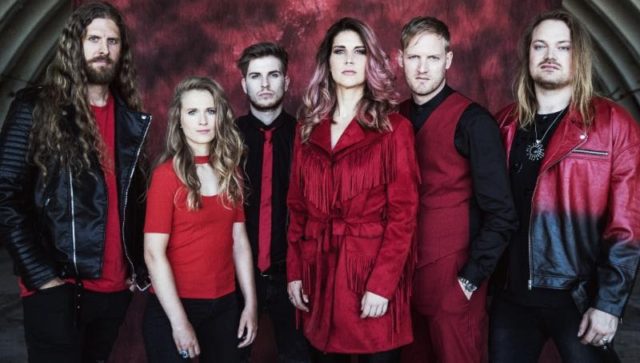 After bringing the sunshine on a rainy Friday at Download Festival, we caught up with Martijn Westerholt, the man behind the keys, songwriting and orchestras of Dutch Symphonic Metal masters, Delain, to talk endings and beginnings following the end of Delain’s trilogy, how he approaches writing for orchestras and his love for the sport of cycling.

So earlier today you played on the second stage which was the second time Delain has played at Download Festival. How was it?

Really, really, really good! Fantastic. And we were very lucky it was dry – I didn’t expect that! I think we played here three years ago and I remember it was pouring then and now it was dry and the field was completely full of people. So, I think we were spoilt!

You’ve also announced today that Delain will return to the UK early next year – what can fans expect from that? Are you going to be bringing a bigger stage show and all that fun stuff?

Yes, it’s going to be a new album show because we will release that before that tour so we will have a completely new set up and new songs, new set and hopefully people will like it.

Earlier this year you released the Hunter’s Moon EP which was the final part of the trilogy that also includes Lunar Prelude and Moonbathers. What did it feel like to close this chapter in Delain’s career with this release?

Yeah, it’s kind of the end of an era. To describe it in this way then sometimes it is mostly realisation and closure because the previous album cycle is done. It’s kind of a closure and a new beginning because there are also new songs on there. People also thought it was an album and it’s kind of a compliment because it was supposed to be a really tiny EP and then things went a little bit out of hand and we got a really big CD with ten tracks and a blue-ray – so if anything it was a little bit bigger! That was because so much happened this era so it was a special way of closing that.

On Hunter’s Moon you’ve created quite a bombastic and cinematic sound for Delain with some of the newer tracks, do you think you will continue to explore this vibe on the next album?

Yes absolutely. I love bombastic music. Right now, we are recording a new album and this week choirs – real choirs – were recorded on Monday (10th June) and yesterday (Thursday 13th June) a few more choirs. I’m really stoked and really curious how the end result will be. And also, choirs means a lot of bombastic music so we really want to continue in that direction – we love that.

Will you be arranging all of the choirs as well?

We work with a Finnish producer, Miko Mustonen, and he is fantastic. He does all of the orchestral’s together with me and we recorded all the actual choirs this week and it’s great to work with him.

What’s it like to arrange the orchestral side of things? Is it really difficult to write for the multiple instruments and all the different layers of the music?

No actually for me it’s a very organic process. When I start writing most of the time I start with strings and then I add the horns and then I add choirs and layers like that. And it’s fun. It’s a lot of fun to make it so it’s a very organic process. When I’m done then it goes to Miko, the Finnish producer, and then he adds stuff to it so that’s a little bit about how the process goes. It’s a lot of fun doing it.

Do you think in sometime the future you would like to tour with a big orchestra a recreate that sound live similar to what Epica and Within Temptation has done?

Last year, Joey officially became a member of Delain. What dynamic does Joey bring to the Delain sound and how does his input feed into the writing process?

Fantastic. I think Joey is one of the most professional guys I’ve ever met and he’s only 23 years old. So, he’s the youngest person in the band. He’s already such a good drummer and has such a professional mentality. It’s an honour having him in the band. Although the band tries to treat everything professionally the vibe is also really good. I think the vibe has never been as good as it is now and the last time it felt so good was in Within Temptation from years ago. That’s special because that doesn’t happen so often and now it’s happening and I’m really aware of it and really appreciate that.

This year is the 10th anniversary of your breakthrough album April Rain. How do you feel about the album looking back on it a decade later?

That album brought a lot for us. I think it was kind of the breakthrough in our genre so to say and I was always surprised how it came back all the time. People were saying “yeah but April Rain!” so it’s a very important album to us. I was also thinking we should actually do a special show only playing April Rain songs and we sadly don’t have time for it this year so I think we will just have to celebrate the 11th Anniversary of April Rain and do it next year or something like that.

We heard in another interview you like watching cycling and like watching events such as the Tour De France with Mark Jansen from Epica. What is it about cycling that you enjoy so much?

The stories behind it. People who are not into cycling say you see a bunch of people cycling and that’s it and it’s boring and I can understand that. But it’s about the story behind it how people came there and how hard it is and compared to soccer when somebody falls to the ground like he’s injured and there’s nothing going on – and of course it’s part of the game – and in cycling you have to kind of take people off their bikes with their broken body parts. It’s a very tough sport and there are a lot of tactics involved as well and tragedy as well. And it’s teamwork. There’s a lot of facets that a lot of sports have – that’s why I like it.

Do you take any of that cycling mentality like the teamwork and preparation that goes into the races back into the band?

Can you recall your first encounter with Symphonic Metal? Did you find out about it from a friend or did you have cool parents/relatives big into the genre that introduced you at an early age?

Last one from us today… our website is called Rock Sins. We’re asking all bands we’re speaking to this weekend to tell us what their biggest rock sin is… so what’s yours?

Oh wow. The biggest rock sin. I think it’s that I’m not that rock and roll. Which means there are no big anecdotes and no big stories to tell. It’s pretty boring and that is kind of a sin when you’re in Rock and Metal isn’t it? So perhaps that’s my biggest rock sin – very boring – again a sin on that too!

Delain’s newest release, the Hunter’s Moon EP, is out now on Napalm Records. They return to the UK for a full tour in February 2020, the details of which you can find below:

Tickets for the tour went on sale last week. Pick up your tickets from Seetickets now! 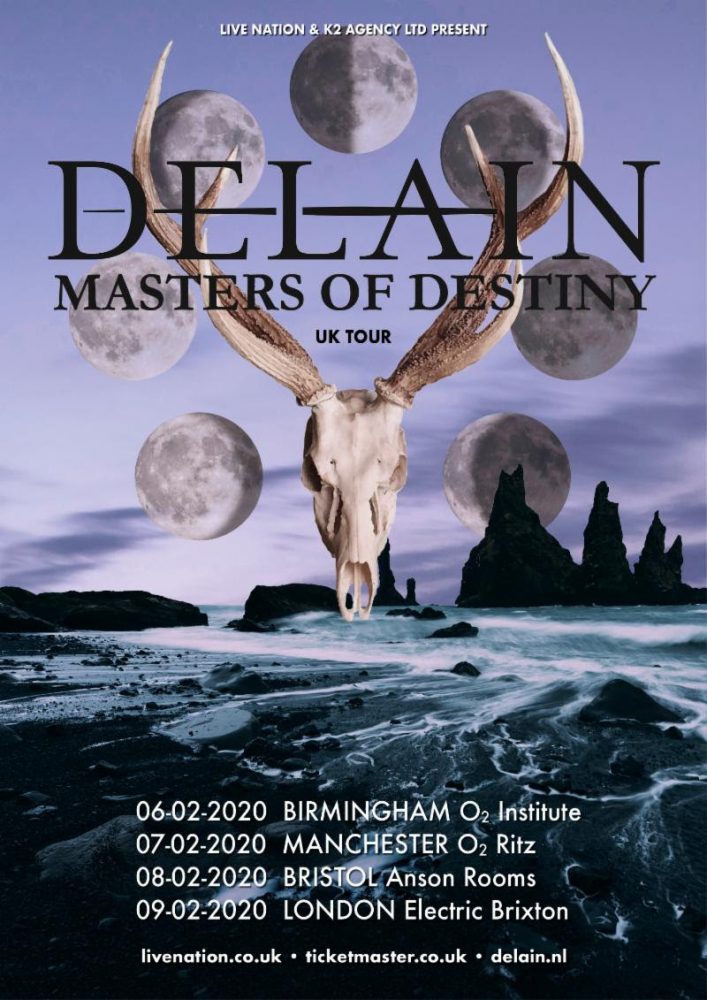