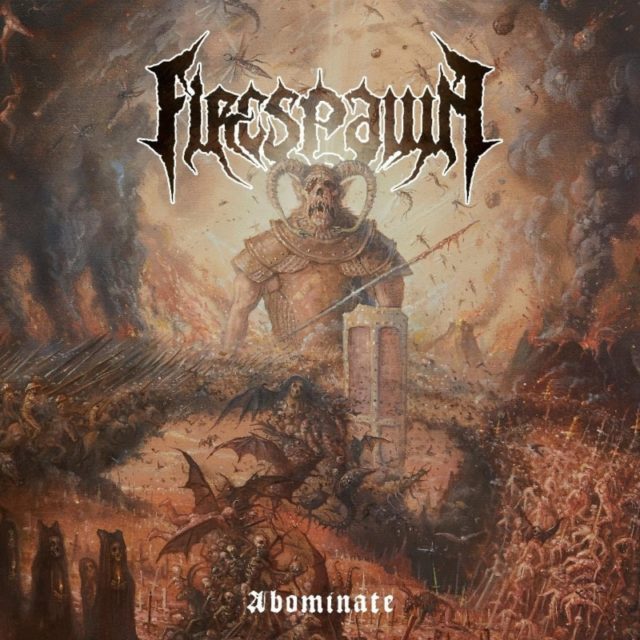 Is there something in Umeå’s water supply? If not then there is some form of Hadean spell cast over the Swedish city as it seems to produce only the finest heavy music. Those of you not familiar with the North Eastern province in the Västerbotten will know of its exports, Meshuggah and Refused, two bands of such towering influence and reverence that they stand as bastions of their respective scenes. With this sky high bar of quality, how do supergroup, Firespawn live up to Umeå’s legendary musical reputation with latest offering Abominate?

“An ungodly man diggeth up evil, and in his lips there is fire”. From the lips and hands of Firespawn comes an inherently infernal sound, one that in its slower moments is reminiscent of Terra Incognita era Gojira – a comparison bolstered by the liberal use of pick scrapes throughout – but in its higher velocity, shredding movements it harks to the progenitors of death metal; Death. It’s a fastidious set of performances all around that work coherently to make deathened metal with traditional and modernist influences. If there is a critique to be made of the musicality of the album, it’s that the solos feels disparate from the rest of the pieces; a self congratulatory and ancillary burst of disharmonious noise in amongst something so wonderfully constructed, and it happens all too often; “As a dog returns to its vomit, so a fool repeats his folly”.

“To understand a proverb, and the interpretation; the words of the wise, and their dark sayings”. Firespawn’s lyricism isn’t meant to educate or pontificate on great philosophical questions, it is escapist music to set you free from the trappings and humdrum of daily life. Primary lyricist, Impaler, instead weaves rich tapestries of battles between the celestial forces of light and darkness, namely the former succumbing to the latter. It is bleak storytelling, using Judeo-Christian imagery to invoke its hellish ambition, and so feels at once grounded in reality despite its fantastical storytelling. The poetry of Abominate feels similar to the Deific rage of Behemoth’s magnum opus, The Satanist, as it feels as though the artists are battling against the idea of the existence of a higher, or lower presence: this can clearly be seen in song titles such as Godlessness and Heathen Blood.

This album does Umeå proud. It is a borderline excellent piece of death inspired, almost sludge laden metal, let down only by ill fitting histrionic solos. The Hunter, Death and Damnation and Godlessness stand out as high points in the record, as does the stunning, truncated finale, Black Wings Of The Apokalypse. The performances are proficient and hellish, befitting of the mood Firespawn seek to capture, and the lyrics have a serious flair that is often lost or entirely absent in the more escapist end of the heavy medium. The band have a penchant for penning wonderful songs, and continue to do so with Abominate. We can only hope they have more hellfire in their bellies and continue to bring us Luciferian joy for a long time to come.

Firespawn’s Abominate is released on the 7th of June 2019 through Century Media Records.