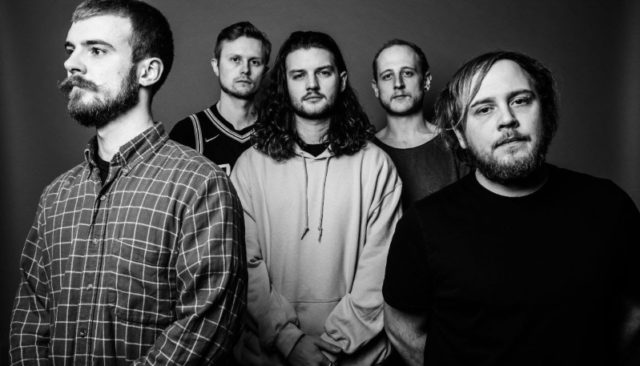 As their EP, All At Your Mercy has been unleashed upon the world a few days, Rock Sins recently spoke to lead singer of Pleiades, Andy Calderbank to discuss the band’s music and influences, the UK heavy scene at large and ambition. He’s an incredibly forthcoming and candid man, with an audible grin on his face as he picks up the phone, ready to dive into the world of all things music obsessed.

Reading your bio I see Pleiades started as a three piece. Do you think your sound has inherently changed with the addition of extra members?

Yeah certainly, I think the problem the guys had before even I joined is they were kind of limited [in what they could do]. The thing with post-rock and post-metal is unless your doing it extremely well and in ways people haven’t heard before it’s very hard to break out of the crowd as there’s a lot of people doing instrumental, ambient, soundscapey music. So I think the more members you add, your range expands and your scope adapts and evolves so it’s just a natural progression for certain bands. Post-rock and instrumental is all well and good in theory but you do sort of limit yourself naturally unless you’re doing it incredibly well.

It seems from the outside looking in that much of Manchester [Pleiades’ hometown] and the North by extension is dominated by slam and hardcore. Have you found starting out as a post-rock band difficult?

As a new band it was hard to put ourselves into a crowd. I think the best way to start is you find a group of bands and you play shows with them and you either evolve enough to break out of it, or you stick rigidly to [a style] and become a leader taking those bands forwards with you and creating a scene of sorts. At first it was hard as we were kind of the anomaly in the line up: You’d either be the band that was too heavy for the audience, or you’d be too melodic and light and you’d be very self aware of your sound. As we’ve got used to it, we’ve garnered a more intense live show, less post-rock and post-metal and more of a visceral hardcore, similar to an Employed to Serve or an early letlive. That’s the live show we’ve evolved into and it’s made it our own in a really satisfying way.

You can definitely hear that hardcore influence in your music. Who are your key influences as an outfit?

I think we all individually come from different areas. Our drummer [OJ Reilly] has an almost jazzy, break beating, punky kind of sound, and then we’ve got guys rooted in post-metal, post-rock etc., then we’ve got an element of film soundtracks with our soundscapes that gets brought in, and I’ve really been into Glassjaw and Refused for a really long time. So that’s my lineage and I’ve brought it to the band and let it evolve naturally into the sound that we have now. [We even take influence from] Dance Gavin Dance with that sort of mathy but ultimately still Post-Hardcore sound. That’s the kind of thing that I wanted to bring the energy of.

So the EP is fantastic, and your getting some serious plaudits. As well as a stellar one from us, you’ll be getting a great write up in Metal Hammer.

Yeah [the response] has been really exciting. Of course getting into Metal Hammer we thought ‘Oh God this could make or break us!’. But fortunately I think it’s all been very positive and we’re really looking forward to the release.

Talking about making or breaking it, how do you feel about the health of the British scene currently?

Heavy music in the UK is strange. I think it got to a point where it plateaued and the heaviest bands you were getting for a long time were Mallory Knox, Young Guns, Deaf Havana in a wave of kind of Post-Hardcore but still quite mainstream rock music. But then all of sudden you get to where we are now. Manchester especially has long been a very indie place, it’s in its DNA, the obsessions with ‘Madchester’ and the inability to let it go. And I think people just got tired of it. Bands like Employed to Serve are spearheading this interesting, innovative hardcore/metal and bands like Pijn as well, who are Manchester based – Joe Clayton recorded our EP so getting to work with him was great. I think with bands like that heavy music is in a very good place, it just needs more eyes on it. And whether that comes with time, who knows? You’ve just got to let it evolve and hopefully we’ll soon be seeing this brand new golden generation of heavy music coming through, and the UK is going to be at the forefront of it.

It feels like it’s the first time since pre-Thrash that the UK is ahead in terms of heavy music.

Certainly. When I was growing up, US music was the stuff that I wanted to sound like, and I think you had a wave of bands in the UK who automatically sounded American. Not through any fault of their own, but their influences were American so they just affected this identity. In their mind their idea of what they wanted to sound like is Daryl Palumbo, it’s Jason Butler, it was American musicians because at the time there weren’t any decent UK bands making any waves.

It feels like for a long time bands have been afraid of talking about their ambitions. Bands seemed reticent to want to be big until Code Orange. What are your ambitions for Pleiades?

I don’t want to be modest about it, I want to do this as a career. I want to wake up and do this every day, I don’t want this to be something I do on the side of a job that I put up with. I want this to be a career, I want to be at every festival, I want to be the new, exciting band that’s making waves, I want to be what letlive. were for me when I first heard them. When I first heard Fake History, it was the album that made me want to make music, I didn’t want to be the guy watching, I wanted to be the guy on stage. It’s about just admitting to yourself what you want because as a band some of us are in our mid twenties, others in our very early thirties, and you don’t have a lot of time to decide what your doing. You either do it or you don’t. And I you don’t you regret it later on. We’re in a position where we’ve got a lot of great people behind us, and we’ve got a very good opportunity to make it a career so why not go for it? Why not say what you want to do? And for me it’s to wake up and do this every day. I understand [other bands] don’t want to sound arrogant or cocky, but at the end of the day with any music that requires so much emotion and energy, if you’re not all in, you’re not in at all. That’s been my philosophy from the very start; I uprooted and moved cities to make this band a priority, and it’s not going to change until it becomes an impossibility.

So once again, the EP is fantastic, I can’t wait for it to reach more people.

We’re really raring to get out and do it live. When a lot of people hear post-rock or post-metal they may be expecting long songs built around tension and crescendos, built around atmosphere. But when they see us they’re going to get a show that’s intense and interactive, We’re trying to bring that hardcore style to post-metal and post-rock.

You certainly do that. The EP is really focused and concise but still has all of that atmosphere and dynamism you expect in the finest post-metal. Have you got any touring plans in the works?

Yeah it’s slowly coming together. We’ve got a couple of shows with Pagan coming up in Southampton and Tunbridge Wells. We feel that it’s really important not to get too comfortable and keep playing the same places on your city too much. You can get too comfortable at home, so we said ‘take us as far away as you can’ and you can’t get much further from Manchester than the dates we’re playing. It’s good to get comfortable with being uncomfortable, getting used to being a band on the road, ring with brand new people and making those connections away from home.

Pleiades’ new EP, All At Your Mercy is out now via AWAL. Stream it on Spotify, and buy it from Apple Music. 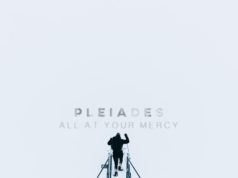 Pleiades – All At Your Mercy