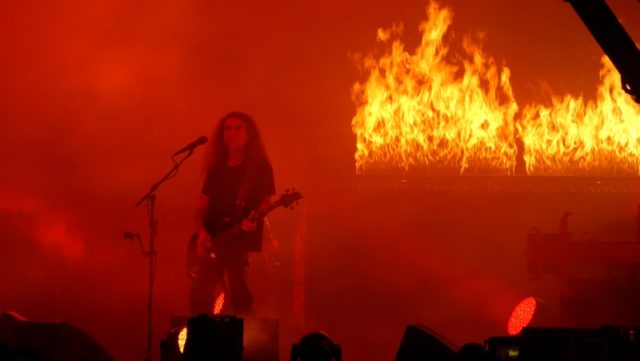 It’s quite hard to put Slayer’s (9) last ever UK performance into words. Being outdoors and with an audience who for the most part might well have been flagging after battling the Drownload conditions, it could have led to an anti-climax of sorts. Then you remember that this isn’t any band, it’s Slayer. Whilst perhaps not quite on the levels of sheer perfection they hit at Wembley back in November, this was another phenomenal performance from the undisputed kings of evil sounding thrash.

The setlist threw up a few surprises – most of the expected big songs were present and accounted for, almost mandatory on such an occasion, but there were some serious deep cuts too. The likes of Born Of Fire, Temptation and Gemini might have been on some Slayer die hard’s dream setlists for this occasion, but few would have expected it to turn to reality. In spite of the competition from Tool on the main stage overlapping with the bulk of their set, thousands of the Slayer legions stayed the full set to give their heroes the deserved final send off their legacy deserved.

The power of the final run of songs – Hell Awaits, South Of Heaven, Raining Blood into Black Magic (which was just ridiculous), Dead Skin Mask and Angel Of Death is the kind of thing most bands couldn’t even dream of, never mind accomplish. As the final strains of Angel Of Death subsided, Tom Araya was left alone on the stage, clearly very emotional, slowly walking up and down, occasionally giving mini bows of thanks. The huge “Thank you Slayer” chant that followed was too much for many in attendance, including Tom himself. He really looked like he wanted to talk, but could only manage a very simple and heartfelt “Thank you very much. Goodnight. Goodbye” before exiting a UK stage for the last time. Scenes that will live long in the memory of all those who were there to see them. We will never see their like again.