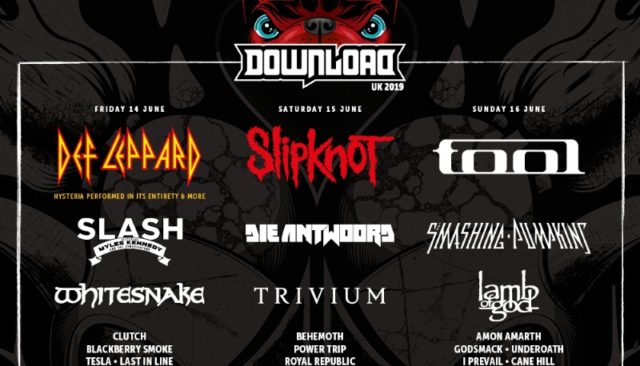 Sometimes, when a Download line up comes together, individual days stand out as something that could be truly special, even in the context of some of the legendary line ups that have gone before. The Saturday of 2006, when Metallica played Master Of Puppets in full, the infamous KoRnaoke following Jonathan Davis being taken ill and Trivium and Avenged Sevenfold taking their first steps as major players in the metal world being one such day. Slipknot’s first headline performance in 2009 was another such day, and Linkin Park playing Hybrid Theory in full for the only time ever, with heralded performances from Behemoth, SikTh, Status Quo, Twisted Sister, Bowling For Soup, Killswitch Engage and more being another still.

The Saturday of Download 2019 has all the hallmarks of being another one of these days. Every single band on the main stage has their own special story attached, and there’s plenty worth seeing beyond the main stage too. Kicking things off will be the much acclaimed Alien Weaponry. The young Mauri metallers are something truly unique in the metal world at present, and the progress they have made over the last twelve months has seen them rightly promoted from The Dogtooth Stage to opening the main stage, reminiscent of what happened with Trivium almost fifteen years ago.

Royal Republic are a band who’ve been vastly underrated by many, but are a band Rock Sins has always had an affinity for ever since their debut album with the party rock anthems like Tommy Gun and Full Steam Spacemachine. US hardcore thrashers Power Trip are a fantastic live band, having proven their live skills most recently on last years’ tour with Trivium and Code Orange and at Bloodstock. They should thrive on the big stage and may be a good bet for some of the weekends’ biggest circle pits. Likewise Behemoth, who’s profile has never been bigger, have earned the chance to showcase their flavour of black metal on the main stage at Download, in what could be a career defining set.

Having recently been moved over from the Zippo Encore Second Stage, Skindred’s mid to late afternoon slot is perfect for them. Few bands can get a crowd going like Skindred, and their frontman Benji Webbe in particular, and the Donington masses should be treated to 45 minutes of a very good time (and of course The Newport Helicopter). Trivium’s return to the main stage is richly deserved, having clawed themselves back to equal height of their previous successes more than a decade ago thanks to most recent album The Sin And The Sentence. Could this be what pushes Trivium onto finally being an arena band (at least in the UK)? We’ll find out soon enough.

Saturday’s wildcard is firmly in the shape of Die Antwoord, who stick out like a sore thumb. Where previous such acts like Chase and Status were paired with The Prodigy, Die Antwoord are quite the contrast to the masked metal legends that will follow them. They will no doubt appeal to some, but they are likely to clash with Halestorm’s headline set on the Zippo Stage, who are another band who have never reached the heights of success they have currently. Their Zippo set deserves a bumper crowd, and Rock Sins suspects they will definitely get it if they’re up against Die Antwoord rather than Slipknot.

Of course the main attraction for a lot of people will be the aforementioned Iowan metal juggernauts. With the new album We Are Not Your Kind on the horizon, a new single, new masks and no doubt a new stage show to match, Slipknot headline Download for the fourth time. Everyone knows what to expect from a Slipknot headline set at Download, but we’re sure there will be a few surprises thrown in along the way.

Elsewhere, as well as Halestorm, the Zippo Encore Stage has the likes of Bad Wolves, who could well be the next huge US rock band following the success of their Zombie cover and debut album, Three Days Grace and the latest incarnation of The Stone Temple Pilots to be enjoyed. The Avalanche Stage boasts pop punk / emo favourites The Wonder Years, Aussie pop rock newcomers Yours Truly and emerging noisemasters Parting Gift before Mark Hoppus and Alex Gasgarth’s new band Simple Creatures top off things for the day.

The Dogtooth Stage, having had Alien Weaponry removed from its lineup, still boasts some very impressive international talent. Underside, the Nepalese metallers who have made a big splash in recent months, are on the bill, as are Lovebites, who could well follow in Babymetal’s footsteps as the next Japanese metal breakout act. The Hu are another to watch, the first Mongolian metal band to achieve international recognition – and when you hear them, you’ll find out why. From all of these global acts, the stage is headlined by British extreme metal legends Carcass, who could well be the band of the festival for those who prefer their metal at the extreme end of the spectrum.

All in all, it’s an absolute feast of heavy and alternative music with truly something for everyone. If you’ve yet to get tickets for Download 2019, either for the whole weekend, or if you just want a day ticket to see the bands we’ve talked about here, then tickets can still obtained from the Download Ticketing Site right here.

Stay tuned for more previews and build up as we count down the remaining days til Download 2019! 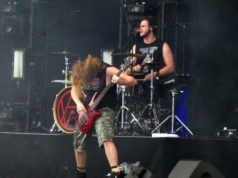 An Interview With Alien Weaponry at Download 2019: “It’s great to see people taking the time to research what we’ve written about”