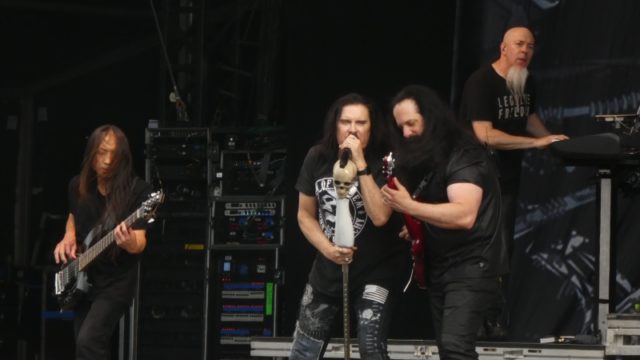 Last month, Rock Sins had the huge privilege of spending some time with Dream Theater’s legendary keyboard wizard Jordan Rudess. Ahead of their performance at the 2019 Download Festival, Jordan braved the improving muddy conditions to talk to us about all things Dream Theater as well as his recent solo album Wired For Madness. For those interested, you can also see Rock Sins review of Dream Theater’s excellent Download Festival performance here. Now, over to Jordan…

This is Jamie from Rock Sins and I’m here with Jordan from Dream Theater, how are you doing sir?

This is Dream Theater’s first time back at Donington for ten years, we can’t quite believe it’s been that long!

JR: Is it really? I can’t quite believe it! It honestly just seems like the other day *laughs*

In that time you’ve played Sonisphere, Ramblin’ Man and High Voltage in terms of other UK festivals…

JR: And it’s all a blur! *laughs* But when you see Download in the schedule, there’s definitely a little bit of a glow when we look at where we’re going.

This is just another stop on your busy schedule if I’m not mistaken, lots more European festivals to come?

JR: Yes, this is quite a big run, it’s a seven week run all around Europe, so much flying, buses, trains, boats, you name a mode of transport and we’re probably using it. It’s all part of it.

You released the new album (Distance Over Time) back in February and the reaction to it seems to have been overwhelmingly positive, you all must be very pleased.

JR: Yeah, we are, it’s been awesome. The album has been very well received all around the world, it’s been doing very well right out of the gate which is fantastic, and we can really feel it at the shows too.

Is the new material being received well live then?

JR: So well. We were just talking about it last night actually, we played in Germany in Oberhausen and it was mostly the new material and you could tell how much the audience was digging it (the new songs) and we’re getting that feedback as well.

Was it strange almost to go back to doing a more traditional album after doing a project like The Astonishing?

JR: No, not really. It was more of a return, a comfortable return. There is definitely a spot where all the musical talent and vision comes together and I think Distance Over Time is that. The Astonishing was very much us wanting to try something different, using our creativity to create something that we really wanted to create, knowing that it’s just not on the straight ahead, obvious Dream Theater path. This band has been together a long time and we all felt like we deserved to go down whatever the hell path we wanted *laughs*. We wanted to do it and we were very satisfied with what happened, with the results. We knew it wasn’t going to please everybody but hey, you can’t please everybody all the time. Then coming back to this album I think it was stronger because we took a little detour and then we came back it was like “OK, let’s do it!”

I saw you do The Astonishing at The Palladium Show and I think having seen it live I got it much more but obviously not everyone was able to have that experience and now you’re back to the more traditional approach it also makes the live show more accessible again as well.

JR: Yeah, when you think about it a concept album like that has a lot of stops and starts and when you’re listening to it it’s not like you’re just listening to songs. It’s a little bit harder to grab onto it. And we put a lot of work into that live show too. It was the grandest production to this day of everything we’ve ever done.

Moving back onto touring, the US tour you were doing the earlier this year, you’ve been promoting Distance Over Time but you’ve also been celebrating the 20th anniversary of Scenes From A Memory which must have been very special.

JR: *Smiles* Oh it is, the combination of those two elements has really brought people out in force and everybody has been excited and its been really awesome.

Is that a tour that’s likely to make its way over here at some point?

JR: Oh definitely. We’re not going to deny our European fans that experience!

Not so much more recently but in times gone by when you would do the evening with shows and you’d pick certain albums to play in full like when you played Dark Side Of The Moon in London fifteen years ago. You had done Scenes From A Memory in full at the odd selected show in the past.

JR: Yeah the odd one off things. But the tour has been around that and the new album basically.

For your Download set this evening, you’ve got maybe slightly less time than you would on your own tour, still a decent amount of time but less time. Is the set today fairly new album heavy?

JR: Yeah, it is, but with some cool catalogue stuff thrown in for sure.

Alongside all of the Dream Theater developments, you’ve had the solo album release to factor into everything. It must have made things even busier for you than for some of the others?

JR: It has been….a crazy year of releases which has been really exciting but with a lot of work. It’s so rewarding to see the stuff come out, and creatively it has been very rewarding. I got to do a real Rudess album with Dream Theater, and then my own stuff coming out, its crazy prog and all the different styles that I’m into. A chance to release all that varied musicality and get it all out there in a very cool way because the record companies that Dream Theater are with, Sony / InsideOut is awesome and now Mascot who have released my album are awesome too! That’s unusual today to be working with people who are so passionate about what you’re doing, so good at it and so into it, I am very lucky to have that kind of support behind everything I’m doing creatively right now.

Will you get a chance to do any shows with the solo album do you think?

JR: *Laughs* Well when I look down at my schedule and the fact that Dream Theater is basically just starting on this massive world tour sooo…..*laughs* I think we need to get a bit further into this and then I can work out some time to get out on my own to support my solo work.

Lastly, probably a question you’ve been asked before but with your extensive catalogue now and you’ve personally been in the band for 20 years, is there any one song you find particularly challenging to play live?

JR: It’s funny that you’ve asked me that because the sets that we’ve put together for this Summer festival run have some of the hardest keyboard stuff of any of our stuff, all in one run. We’ve been playing stuff like Dance Of Eternity which is a hard keyboard song, The Presence Of Enemies which has some tough keyboard spots, I’m not sure if we’re playing it tonight but A Nightmare To Remember which is one that’s been in rotation this Summer, and that’s really hard. Stuff like that, and you just realise man this stuff is a bitch! *laughs* I mean it’s my own fault, I wrote the parts! But to have them all in one set is definitely a lot so I have to stay very focused. You may have noticed I’m not drinking a beer, I’m just drinking Pepsi. Breaking All Illusions is another one, all the ones with epic bits *laughs* but that’s what makes it Dream Theater! That’s what we do, we torture ourselves, we write these hard parts that we like to sit around and practice all day!