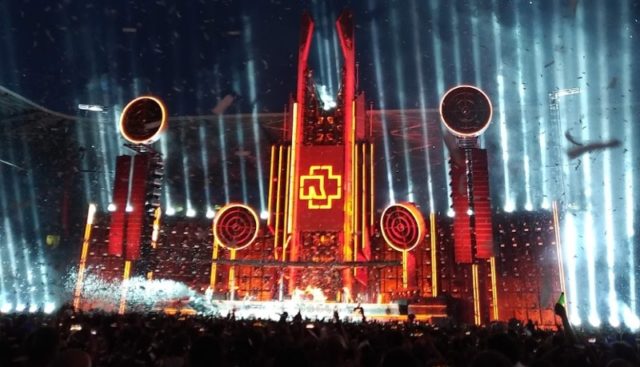 The hottest ticket of the Summer, literally and figuratively. Almost nine months after the almighty ticket scramble online, Rammstein arrived back in the UK for the first time since Download 2016 for their only UK show of 2019. The unlikely venue of Stadium MK in Milton Keynes, home to the MK Dons, proved to be an excellent and pretty well managed location for Rammstein’s first UK stadium show. And oh, oh, how they made the most of it.

How do a band like Rammstein start a stadium show? With an explosion so loud it sounds like a genuine bomb has gone off. We can only speculate what happened to the eardrums of those who were right down the front. Choosing Was Ich Liebe from their recent self-titled album may not have been the most obvious choice, but as the chorus is boomed out by Till Lindemann and plumes of black smoke fill the air from the stage and the three prominent pyro towers around the stadium, it’s like being transported to a post-apocalyptic wasteland of darkened despair (particularly if you understand the lyrics to the song). The towering staging quickly transformed to something out of the Third Reich for the following Links 2 3 4, for which the sense of anticipation went through the (non-existant) roof. The opening part of the set blended old favourites with material from the new, self-titled Rammstein album expertly. A thunderous Sehnschut was followed by the equally heavy and forceful Zeig Dich. The grandiose Mein Herz Brennt was followed by the jarring, disturbing Puppe (complete with Till setting a giant pram on fire) – making what unfolded in front of our eyes just as uncomfortable as the track itself, but when have Rammstein ever shied away from such things? Anyne of an easily offended disposition would have found themselves at the wrong gig.

With the Summer sun slowly disappearing behind the Stadium MK, things took a Kraftwerk / Daft Punk-esque twist for the Richard Z Kruspe remix of Deutschland, complete with glowing Around The World style dance suits and Richard in Elvis style get up in a DJ booth elevated some 40-50 feet in the air, ascended partway up the central spire of the main Rammstein tower of the set. This segued into the main version of the lead single from Rammstein’s latest album, with the lighting glowing eeire red to match the song’s music video. The reaction to Deutschland and the following Radio showed clearly what an impact the new album’s singles have had, and how much of an appetite there still is for new music from the German industrial metal legends. A quite absurd run of Mein Teil, Du Hast (for which the pyro towers came fully to life, making it toasty for everyone in the stadium regardless of location) and a breathtaking Sonne sent this show into the stratosphere – both musically and production wise. Sonne had SO, MUCH, FIRE. Things then went swiftly the other way, slowing it down and phone lights in the air by the thousands for a rendition of Ohne Dich which closed the first part of the show. With almost any other band, this would’ve been a fantastic show on it’s own, but Rammstein still had a good half hour still to go. 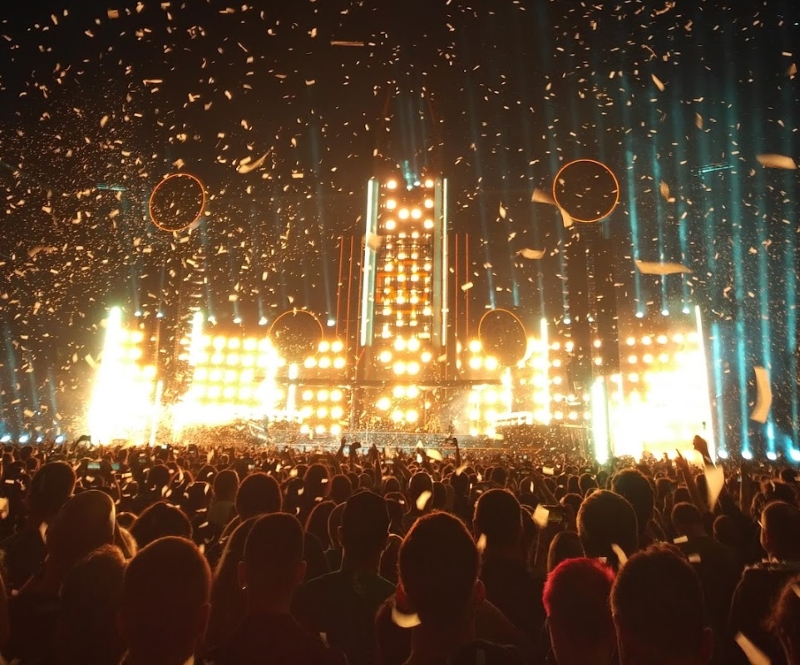 Having decamped to the smaller, “second stage” located in the audience, a quite remarkable vocal / piano version of Engel with all of the band doing vocals (along with the words on the giant screen for full audience participation) got things going again in stunning, almost beautiful fashion. Things quickly returned to normal as the band (sans Till) embarked on the usual Rammstein past time of dingy crowd surfing to get back to the main stage, greeted by their singer holding a sign saying Wilkommen! From that point it was full on party mode with both Auslander and Du Riechst So Gut transforming the Stadium MK into something akin to the biggest club night you’ve ever seen. The lighting, as superb as had it had been all night was particularly on point for this part of the show as everyone shed any inhibitions they may have had left and went for it in style. The “cock cannon” used for Pussy has had a serious upgrade since it was last seen, and those down front were unloaded on, to put it mildly, while the rest of those in attendance sung at the top of their lungs about not getting laid in Rammstein’s homeland.

Still there was time for surprises as Rammstein turned the clock back to Herzeleid with their eponymous single from 1995 and THAT riff as the pyro cannons thundered around the stadium for one last time. Closing the show as they often do with a stupendous rendition of Ich Will, a show that was well over two hours felt like it had passed by in a matter of minutes. Even by Rammstein’s standards, this was truly something else. They’ve set a new bar for stadium shows for bands of all genres, not just heavy metal. They are the true masters of their craft, and when the music is as good as it is on top of everything else they put around it, what more can you say? If you get a chance to see this tour, either this year or next, do everything in your power to see it. It is truly a one of a kind experience.

Rammstein Return With New Single ‘Deutschland’; Self-Titled Album Due In May