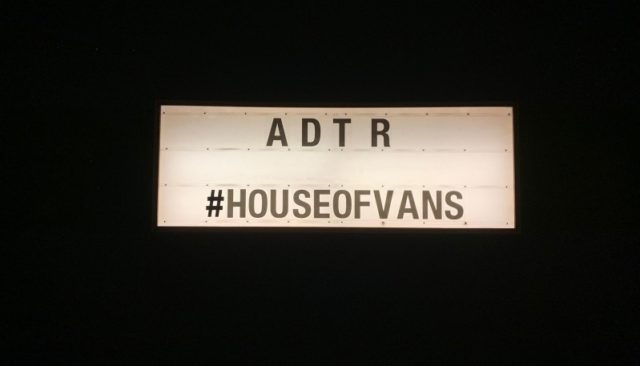 After tickets for the UK return of A Day to Remember and their intimate show at House of Vans sold out within MINUTES (and I mean, 2 or 3 minutes) a friend to me “I think ADTR broke the internet…”

I think A Day to Remember (9) broke House of Vans too. With their monumental slots just before Foo Fighters at Reading and Leeds, and with fans being starved of any live shows in the UK since 2017 seeing the band in this very intimate setting was a truly special occasion for those that were lucky to get those golden tickets.  Particularly when you consider the incredible pace of which the band whipped through their set list and the announcement of their new album “You’re Welcome” on their new label Fuelled by Ramen.

As an opener, 2nd Sucks certainly slapped everyone round the face – with a pit opening from back to front as the chugging riffs from Skaff and Westfall got everyone on their feet or in the air crowd surfing. A swift transition to Right Back at it Again got the crowd singing along, before jumping right into Paranoia with the challenge of a wall-to-wall circle pit and lead vocalist Jeremy McKinnon commanding “you don’t have to participate, just get the f**k out of the way”. Just these three opening songs showed the diversity of ADTR’s sound, and the commitment of their fan base to the band.

There was no let-up in energy across the next few songs, with instructions to surf a crowd surfer during Better Off this Way and the whole place shaking with the foot stomping during Bullfight.

With a change of pace, ADTR then moved onto their unlikely collaboration with Marshmello- a song that showcases McKinnon’s vocals beautifully albeit not in the style many fans know him for. It did however bring the band to the attention of many new fans who have come to love their back catalogue. Given A Day To Remember’s plum spot at Reading, this widening of their fan base should be applauded. This was particularly noticeable during the next song, the heartfelt Have Faith in Me, which you saw spoke to all in the room with its poignant words and luscious melody.

Right on time, the band kicked the energy back up a notch with the classic I’m Made of Wax Larry before debuting live (in the UK at least) their new track Degenerates. Despite only being released the day before the gig, the chorus is so addictive that everyone in the room was singing along and dancing; albeit it not with the same passion as the older material

The next few songs flew by as the band ploughed through the lengthy set list before heading off stage. The crowd of course were not done with them yet, as everyone sang that well know intro to Downfall, shouting one more song and imploring the band to come back on stage. ADTR of course did not disappoint – there is no way that song would not be on their set list. A fantastic double encore of If It Means a Lot to You to take us all back to days of teenage angst, followed by the hugely anticipated The Downfall of Us All to kick us all out of the door with smiles on our faces and sweat dripping off our foreheads.

And that is how A Day To Remember broke House of Vans. Somewhat different to how it will be at Reading and Leeds – but what a warm up, and what a treat for the fans. The set list truly shows off the variety in their sound and the incredibly energy the band put into the show as a unit. It was also apparent just how passionate the fans are, with a sign from one fan saying “You Saved My Life”. The power of music is a fantastic thing.

Finally- have you ever been to a gig at House of Vans? Go at your earliest opportunity – in a world where we all tend to go to the same few gig venues, it was refreshing to go somewhere that was just a bit different. Hanging out in the Metallica section, getting a photo taken at the photo booth, watching a skate video – these are things that will get people into the venue early, spend more money on merch/drinks and watch the support band. With so many venues shutting down, this may be the way to go.