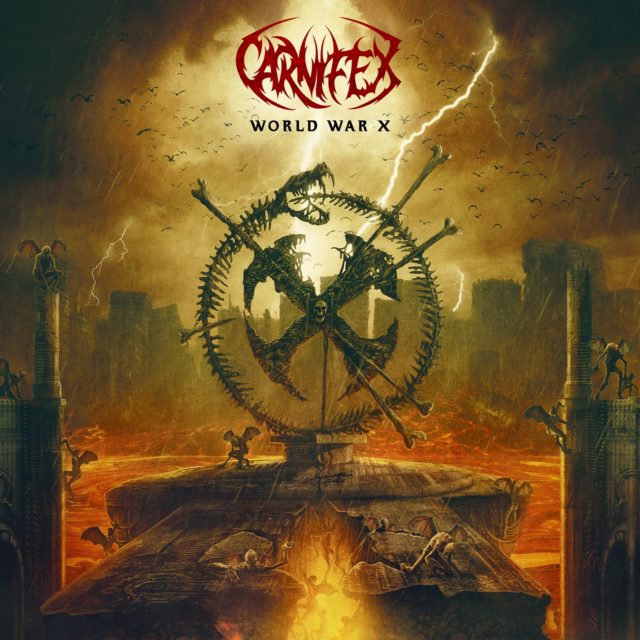 Carnifex is one of the more interesting bands in the death metal scene, and they remain that way but constantly evolving. Not content on sticking to one style or being happy with being confined to a subgenre, their longevity is a testament to their willingness to stay ahead of the pack.

World War X, their seventh album makes a strong case for being their most accomplished. In fairness to them, they have been on an upward swing since 2014’s Die Without Hope progressing all the way through to their previous album Slow Death.

The thing that makes Carnifex such a great band is the kitchen sink approach they take to songwriting, nothing is off-limits and they are all the better for it. Throwing in elements of thrash, death metal and the more pronounced and atmospheric tropes of black metal.

There is a vision and scope to everything they do, which is why everything sounds so apocalyptic when it all kicks off. This Infernal Darkness is a prime example of this put into practice. A thundering brutal assault on the senses, a flurry of blast beats come in like a stampede of hell’s minions and the guitar is so frantic yet melodic that you wonder how something that relentless that you’ll wonder how it came from human hands.

No Light Shall Save Us is sure to be one of the album’s highlights. Featuring  Arch Enemy vocalist Alissa White Gluz seems like a match made in he and it very much is. Both White Gluz and vocalist Scott Lewis are firing on all cylinders here letting our the kind of guttural screaming that is usually reserved for victims of demonic possession, neither seemingly want to be outdone by the other. It’s a definite highlight in an album awash with them.

The Closing triumvirate of Brushed by the Wings of Demons, Hail Hellfire and By Shadows Thine Held offers a pulse-pounding, adrenaline punch of a closing act. Showcasing some of most pissed off, rage infused songs of Carnifex’s career. Each one more punishing than the one before and closing the album out in ferocious style.

World War X clocks in at just over 35 minutes and flys by far too quickly. A lean muscular album that packs a hefty punch. Showcasing Carnifex in all of their glory, this a disgustingly heavy record made by a band that has matured and grown from strength with each record who are now starting to reach their full potential.

It might be too early to tell if this will go down as Carnifex’s defining album, but the evidence is certainly there. The future the band speaks of may be bleak but their real-world counterpart is anything but.