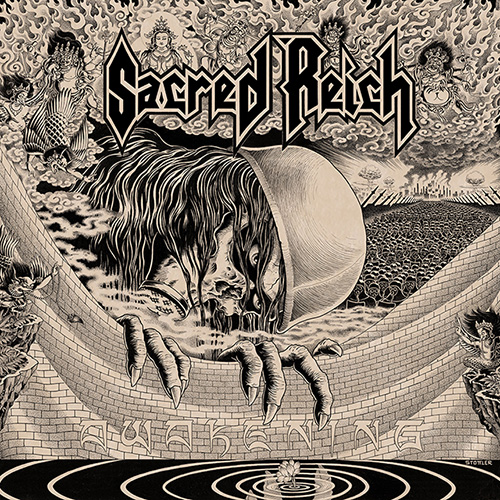 Those who love their American Thrash Metal will no doubt be aware of Sacred Reich, a band not old enough to be lumped in with The Big Four but too old for most of us to have gotten into around the time heavy music had a popularity surge in the 90’s (just before Kurt ruined it for everyone).

Despite the age of the band, Awakening is only their fifth studio album, due in part to a 6 year hiatus at the turn of the century and the first to feature new guitarist Joey Radziwill and returning drummer Dave McClain. Yes, THAT Dave McClain.

The fresh blood in the ranks certainly gives the album the feel of a band half of its age and singer/bassist Phil Rind, still spits out his pseudo-political lyrics with abandon and aplomb. It’s unclear whether Dave is just sitting in the pocket of the song or if he has decided (or maybe even been told) to dial his drums back as there doesn’t seem to be much sign of his token style, preferring instead to drive the song forward with solid beats too tight to even stick a piece of A4 paper through. With that being said, the outro to the title track is a joy to listen to.

With just 8 songs on it the album doesn’t outstay its welcome, which is a welcome reprieve from some bands more recent efforts, where they felt the need to add 3 tracks of about 90 seconds just for the sake of it and attempted to call it “art”, but Awakening definitely delivers songs and opportunities to nod your head and tap your feet in traffic.

Manifest Reality is a stand out track with its positive lyrics encouraging people to make changes in order to do exactly that – manifest the reality.

Killing Machine is perhaps the most 80’s sounding song on the album, but still rips along as you would expect and album closer Something to Believe has more of a groove to it and a big singalong chorus that put together will sound great in a field somewhere in 2020 I’m sure.

Those that have grown older with Sacred Reich will find much here to like and any newcomers to the band will enjoy streaming Awakening on their Spotify accounts while they head home, but I’m unsure if purists and die hard thrash metal fans will find this enough like Slayer to windmill their hair in approval.