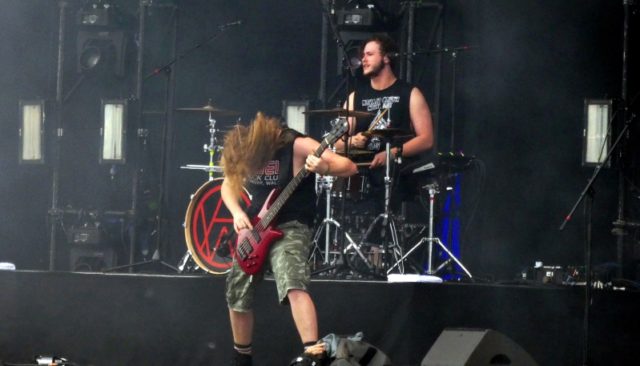 Alien Weaponry are the most exciting thing to emerge in the world of heavy metal in ages. Back in June we caught up with two thirds of the band, drummer Henry de Jong and bassist Ethan Trembath. We spoke about playing Download, their whirlwind last twelve months, the decision to incorporate their M?ori culture into their music, and much more.

We’re here with the wonderful gentlemen that are Henry and Ethan from Alien Weaponry, how are you guys doing?

With this being your first trip to Donington what did you think about it when you saw it in your schedule?

Ethan: We found out a while back that we were playing the small stage and that was awesome just thinking we were going to be playing the smaller stage here. Then a few months afterwards, one of the guys who run the festival contacted us and said hey we had a band pull out, do you wanna play the main stage?
Henry: No thank you! We’ll just stay on the small stage laughs – and look, they forced us to play on the main stage puts on an English accent what fookin’ c***s eh? *laughs*.
Ethan: We were absolutely stoked to hear the news that we were gonna play here and also that we were going to play the main stage.

Ethan: I feel like the reception we got at Download Australia this year definitely helped, those were two really awesome gigs. For us, we’re looking forward to this, a lot.
RS: What differences have you been able to pick up between Download Australia and here so far, aside from the fact that I assume at Download Australia you weren’t ankle-deep in the mud?
Ethan: Yeah Australia was definitely a bit more of a dust pit than a mud one *laughs*
Henry: All the Downloads we’ve been to have a nice vibe to them. We only just arrived here today but from what I can see so far, this one definitely feels like the main top dog.
Ethan: This is the O G Download!

Are you able to stay for some more of the weekend after you play tomorrow?

Henry: Of course we’re gonna be hanging around tonight, seeing what the go is and then tomorrow we’ll be playing and hanging around until everything is finished and then heading off to London after that for our headline show at The Underworld on Sunday. We’ve sold decent tickets for that one so fingers crossed for a good show.

Bloodstock Festival 2018 was your first trip to the UK, how was that for you as an introduction to playing live in the UK?

Ethan: Ah mate it was incredible, we played the Sophie Stage and we had people coming up to us afterwards saying they literally couldn’t get into the fucking tent!
RS: Not awesome for them, but awesome for you.
Ethan: Yeah! We were a bit like errr…..sorry about that!

When you released the album, which has been out for just over a year now, I imagine you had things that you would have liked to happen once you released it, but I imagine you couldn’t have predicted just how things have gone since then.

Ethan: Yeah it’s been INSANE since the release and since we started touring overseas. Things have shot off and been building up and building up and building up.
Henry: For a little while before we released the album we were thinking “are we gonna go anywhere?” and then as soon as we released the album we got invited to play some shows in Europe and from there we got invited to Wacken and it just skyrocketed from there. Like what the fuck is going on mate?! *laughs*

And you’re spending pretty much all Summer in Europe again this Summer if we’re not mistaken.

Ethan: Yeah mate. We’re here for 2 and a half months, prior to this we were in the US for a month, and before that, we were in Australia and New Zealand for a month touring. It’s a hard out year for us touring the album and we’re actually going to be going back to the US after a Europe run as well. We’re hoping to be touring for most of the year.

By the time you do get home, the album will have been out for well over a year so I guess you have to start thinking about the next one.

Ethan: We’re already thinking about it and planning to do some writing, get in our creative zone. Hopefully, we can make it better than Tu. That’s the aim. We’re our own worst critics.

I imagine your relationship with Napalm Records has been a huge help in terms of you getting noticed and getting you out there for all the different places you’ve played.

Henry: Oh yeah, definitely. So much. Just being able to have that name behind us, as well as the support they’ve given us, being able to release it worldwide and do all this cool stuff like the Record Store Day vinyl release. It’s been great having the support of those guys.

What do people back at home (in New Zealand) think of the fact that you’ve taken a big part of your culture and taken it worldwide to a group of people who may well have not had any exposure to it before? I imagine they think it’s cool but do people particularly talk to you about that?

Henry: Yeah, we’ve got people who they come and tell us they love the fact that we’re taking it overseas, spreading our culture.

Ethan: I guess also it’s making people in New Zealand more aware too, certain aspects of the history of New Zealand that a lot of people aren’t aware of. No-one really gets taught about it in school, we learn a lot about other countries but not a huge amount about New Zealand.

Henry: It’s great to see people taking the time to research what we’ve written about and the meanings behind our songs, that applies to people not from New Zealand too.

Was it a very conscious decision that you took one day that it was something you wanted to do or did it happen a bit more naturally than that?

Ethan: Yeah, we kinda just decided one day. We had some friends who entered this competition called Smokefree Pacifica Beats and they won it playing a song that was partially in M?ori. They were like a ska-reggae band and they’re good mates of ours who are metalheads so we thought “what if we did something M?ori and kept it metal?”. That’s how Ruana Te Whenua came about, that was the first song we wrote in M?ori. People received it really well but actually I don’t think we received any criticism for any of it, people just seemed to love it.

Obviously we’ve discussed you guys getting bumped up to the main stage, the last band that happened to here in a similar way were Trivium almost fifteen years ago, if you can go on to do something of the things they’ve done I imagine you’ll be pretty happy?

Ethan: Yeah mate.
Henry: They’re such an inspiration for us. They started off when they were young like us you know.
Ethan: I just hope….sorry a fuckin aeroplane just crossed my line of vision! I hope we get to do something similar to Trivium. We saw them last year at Summer Breeze and they had an awesome show, so yeah they’re definitely one of the bands we try and catch every time they’re on the same festival as us. We’re hoping at some point we get to meet the guys and say hi.

Alien Weaponry are currently on tour in the US with Black Label Society. Full details of dates and tickets can be found on their official website. We hope to have more news from the Alien Weaponry came soon!