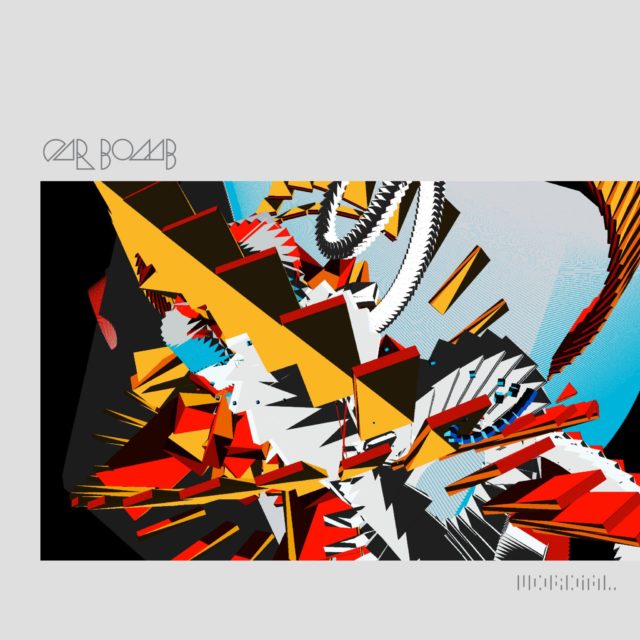 When bands pioneer a particular sound, they run the risk of being labelled as “that x band”. Rivers of Nihil have firmly stated they don’t want to be known as “that sax band”, Sabbath have a particular sound that they generally did not stray away from, and even Meshuggah have a formula interwoven to the mass of polyrhythms that fans know and love. In the case of your new favourite band, Car Bomb, their use of heavy effects layered above the musical insanity have led to them being thought of as a “laser gun” band. Don’t know what that means? Listen to the stunning first single, Dissect Yourself and the whole sordid affair becomes clear. But there is so much more to Car Bomb, and in particular, Mordial, that often goes unmentioned as labelling them as “that x band” proves for an easy signifier, if not a lazy one.

Jagged, obtuse and technically astounding are just a handful of ways to describe Mordial. From the opening notes of first track proper, Fade Out, Car Bomb waste no time in pummelling the listener with their angular, thunderous assault. The song begins as a hellish explosion of riffs and visceral intensity with the force necessary to level a block of flats, but in just four minutes we get a broad stroke of the spectra Car Bomb are trying to cover. The almost whispered chorus is a sombre and chilling juxtaposition to the cataclysmic attack experienced in the verses, and provides a melodious through line that allows the listener a reprieve – the eye of the proverbial storm. This melodic quality exists throughout much of the album, and is a necessity as Mordial is an exhausting listen.

The band are often cited as being influenced by Meshuggah, particularly after having supported the Swedish godfathers of djent on their 25th Anniversary tour, but the myriad of musical citations here make for a far more interesting listen than that of another Meshuggah rip off. You can undoubtedly hear djent tones in the opening of Scattered Sprites, but as guitarist Greg Kubacki notes, their time spent watching and touring with Gojira throughout their history as a band has had a profound effect on their fourth full length record. There are open played, glitching guitar lines that have a breadth to them that calls to mind Gojira’s earlier death metal influence, while simultaneously invoking the mathematical impossibilities of The Dillinger Escape Plan. Add into this Michael Dafferner’s dynamic and dextrous vocals and we can find everything from Death to Deftones on display. There is a plethora of interesting and exhilarating musicianship on display here, and the broad palette of significant musical contributions leads to a tightly focused and complete canvas of artistry.

This is an album built on groove as a foundation, but the flourishes of unpredictable polyrhythmic jazz influenced drumming, down tuned syncopated guitars and dynamic and harmonious vocals are the icing on a very dense cake. Take Xoxoy as an example of the band working as a cohesive unit despite the seemingly improvisational delivery: Call and response vocal hooks atop ever changing guitar patterns that move from the crushing to the ethereal, all while Elliot Hoffman and Jon Modell provide a deft rhythm section beneath. It is a highlight in a genuinely stunning record. The allure of the band is not knowing where they will go next or indeed how they will get there, and as the old edict goes, it’s not the destination but the journey that is important. Car Bomb certainly take us down a path less trodden, but it is a scintillating ride nonetheless. There are ingredients here that you will have heard before, but the end result is an album quite unlike anything you have ever heard. There are so many ideas here performed with such venerability, the album demands your respect.

You could enjoy this album as simply a carnal experience; that base urge for something destructive. But there is more here than a Nietzschean sense of the dark side of humanity, and actually Car Bomb are able to express a multitude of emotional states across this blindingly brilliant record. This album, for all its mechanical flair and mathematical dexterity, actual speaks out as a distinctly human affair. There is a very organic sense of growth to Car Bomb as a unit, and the album as a whole. The title track is perhaps the best summation of Car Bomb’s emotional spectrum, beginning with a minute of calm reflexivity before, before descending into the morose and ultimately the spiteful. This is a dark record, but one that will speak to any listener in a variety of manners. Once again, Car Bomb prove themselves an exciting, interesting and artistically mature outfit, and have outdone themselves. This record is a more cohesive experience than w^w^^w^w, and more feeling than Meta. In every sense they have improved as a band and Mordial is a perfect summation of their current abilities. What the future holds is a scarily exciting proposition, and Car Bomb will surely only go from strength to strength.

Mordial is out via Holy Roar Records on September 27th 2019