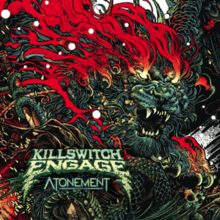 Overall Score: 8/10 lyrics: 9/10 riffs: 8/10 consistency: 7/10 Pros: Eloquent, emotional lyrics | Howard and Jesse together at last Cons: Some will find the hooks "not instant enough" except on The Signal Fire

Killswitch Engage have had an interesting time of it in recent years. Firmly well-established with original singer Jesse Leach, since the release of their last album Incarnate they’ve become something of the support band of choice – at least when it comes to the UK. They’ve supported Bullet For My Valentine, Iron Maiden and most recently Parkway Drive (read Rock Sins review of the incredible evening at Alexandra Palace here). But arguably, with their live show and their back catalogue, Killswitch Engage should be in a better position than prime support for the stars – so will Atonement see their star rise higher again?

Throughout, it’s clear that this is the most personal of albums for Jesse Leach, written in the aftermath of some tough personal times. Often one of metal’s best lyricists, he bears his soul throughout Atonement, making it an album where it’s really worth studying the lyrics and themes throughout as well as enjoying the headbanging it will no doubt induce. It’s particularly noticeable on tracks like the reflective I Can’t Be The Only One and the introspective most recent single I Am Broken Too, one of the album’s standout moments.

For the pure enjoyment factor, look no further than The Signal Fire. Something that fans of KSE have been hoping for ever since Jesse Leach returned to the band in 2012 has come to pass; The prodigal son and former Killswitch frontman Howard Jones (currently of Light The Torch) reunites with his former band alongside Jesse Leach and the results are spectacular. Jesse and Howard trade lead vocal duties on the verses, team up on the chorus and have a wonderful time doing so, while Adam D throws in an excellent solo. The video for the track also captures the pure joy of the song. You’ll be hard pressed to find a better melodic metal song all year.

Elsewhere, Testament’s Chuck Billy adds his trademark vocal force to the aptly riff laden The Crownless King, a track that should greatly please fans of Killswitch Engage’s thrashier moments. Their often used anti establishment tendencies resurface on the groove laden Know Your Enemy (not to be confused with the Rage Against The Machine track of the same name), which could go on to be a sleeper hit with its rallying cry of “the target is in sight!”. Elsewhere the album is very solid, perhaps without tracks that truly stand out but as a continuous listening experience start to finish, it’s a very good one.

Ultimately, Killswitch Engage have made a very good album. It may not have quite the same “wall-to-wall instant appeal” of Disarm The Descent, but give Atonement the time it deserves and as a listener you will be well rewarded.

Atonement is out now.