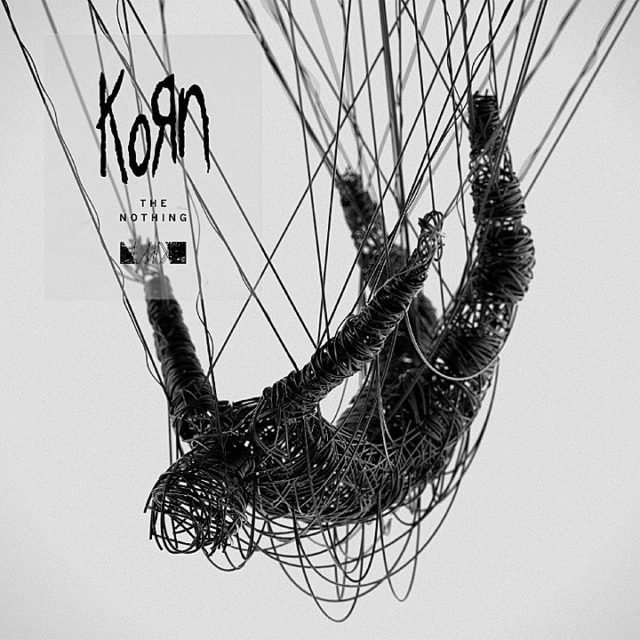 Released on Friday 13th it perhaps should come as no surprise that Korn’s 13th album The Nothing is the darkest of their long and storied career. Penned in the aftermath of the death of frontman Jonathan Davis’ wife Deven last August, The Nothing is more than an album, it’s part of the grieving process.

At times it feels strange that we pass comment on the artistic merit of something so deeply personal, it feels almost intrusive, and matter of fact. How do you analyse the art which comes from such a deep heartbreak? How dare we analyse another human beings’ grief?

Davis has spoken openly about how the recording of the album was cathartic and almost necessary for him to organise his thoughts. And it’s a journey which has produced what will go down as one of the records of the year when all is said and done. Slipknot and Tool have already cemented their reputations this year with a couple of stellar releases and The Nothing certainly belongs in that company. Not that it’s always the easiest of listens.

When you sit down and really listen to this record and take time to feel every note and every lyric it’s impossible not to feel your heart break in sympathy for Davis. This might be a Korn album in name and title, but this album unquestionably belongs to Davis, and he is its driving force.

Opening track ‘The End Begins’ is as bleak and as dark as the title suggests. The bagpipes which herald its arrival almost sound like a funeral march, while the vocals from Davis are nothing short of haunting. The one-and-a-half-minute lament ends with Davis breaking down and sobbing in pure anguish.

Singles ‘Cold’ and ‘You’ll Never Find Me’ are still undeniable highlights. The former sees Davis showcase his full vocal repertoire, before the made for stadiums chorus launches the track into the stratosphere. While the latter is classic Korn, in the best way possible. The riffs are crunchy, the drums rain down like an aerial bombardment, and Davis goes full Davis. Although his fading cry as the track draws to a close of “I’m not doing fine” gives the track a really haunting finish.

‘The Darkness Is Revealing’ again does exactly what it says on the tin. There are no hidden messages or cleaver little details on this record. For better or for worse the whole thing is unflinchingly raw and direct. It stares right into your soul as it cries, breaks down and makes you feel uncomfortable almost daring you to look away. It’s confrontational without being angry, it’s not going to be an easy listen, but you do have to listen. The stifled screams and grimaces of Davis as he spits out the line “God is making fun of me, he’s laughing up there I can see” on ‘Idiosyncrasy’ is another prime example of this.

As good as The Nothing is, and it really is, it’s not beyond criticism. ‘The Seduction Of Indulgence’ is a bit Korn by numbers, while ‘Finally Free’ and ‘Can You Hear Me’ follow a similar path with varying degrees of success. While lyrically the songs may be necessary for Davis the songs feel a little disappointing from a band who have always prided themselves on pushing sonic boundaries. This is not to say that they’re bad songs, more so that the standard set on the rest of the album is so much higher.

However, things pick up once again as the album hits the final third. ‘The Ringmaster’ manages to fit in relentless darkness with a skittish and quick footed vocal delivery which makes the subject matter a little more palatable. While ‘[email protected]’ and ‘This Loss’ are nothing short of brutal. This whole album is a therapy session set to music, released into the world as a coping mechanism and for our own morbid curiosity. It’s a battle against demons, it’s regrets, and it’s hurt, yet somehow, it’s undeniably enthralling.

‘This Loss’ also deserves a special mention for some of that boundary pushing that was a little lacking earlier on in the album. It’s not obvious how you go from cascading riffs and bludgeoning drum rhythms into a house of horrors style waltz during the bridge but someone Korn have managed it here.

Closing track ‘Surrender To Failure’ bookends the start of the album beautifully. If there’s anything beautiful about raw, unadulterated aguish that is. Sonically it’s haunting and ominous but lyrically it’s about as heart on the sleeve as you can possibly get.

“For every good thing I’ve done, there’s a price to pay, And that price has left me horrified, God, I tried. Now I’m the one who never chose this. Now I’m the one who walked a narrow line, And I would do anything to bring you back to me, If only God would let me turn back time”

This is followed by the song fading to black to the sounds of Davis crying out “I’ve failed.” You’d have to have a heart of stone for that not to hit you straight in the chest.

As mentioned above it’s difficult to appraise something that comes from such incredible anguish, but fuelled by grief, Davis and the rest of the band have crafted an album of stunning quality.

The Nothing will rightfully be mentioned in the same revered tone as classics like Follow The Leader. It’s just a shame that it took such a cruel and personal tragedy to give the band the backdrop to create something so raw, so emotionally charged and so stupidly good.