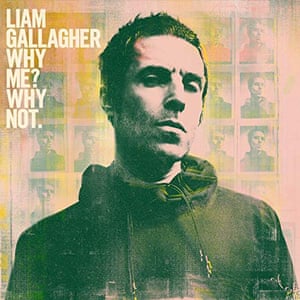 Liam Gallagher is a musical icon. One time frontman of one of the most iconic bands to ever come from the UK, and now a very successful solo artist in his own right.

While Liam would have you believe that he is an ok songwriter at best, his ear for a melody is uncanny and undeniable.

Why Me? Why Not. is Liam’s second solo album and follows the critically acclaimed As You Were. For someone who found huge success fronting bands, it seems the solo life is probably what best suits Liam as an artist.

This album finds Liam at his most soulful and introspective. Seemingly saving the aggro for the press nowdays, while musically choosing to take a calmer path.

Album opener Shockwave is perhaps the most swaggering this album gets, it has all of the Gallagher trademarks on it, featuring a big britpop riff bathed in sunshine, custom built for open fields in the summer surrounded by mates and beers. It’s got one hell of a hook that’ll nestle it’s way into your head and refuse to leave.

One Of Us is a somber tune, that is probably the most emotional the album gets. This and the accompanying video show a man lamenting on a life that has slipped passed him, recounting amilial bonds that have seemingly been shattered. The song’s stand out lyric of ‘You were always one of us, act like you don’t remember, you said we’d live forever’ pretty much sums up the sentiment at play here.

Halo is bolstered by an amazing piano riff that is reminiscent of Elton John at his most bouyant. It’s a playful track that injects a bit of levity to things.

Be still is another up tempo that kicks along at a fair pace. It manages to sound both classic and fresh at the same time without ever sounding contrived.

The Meadow has a lovely bluesy feel to it, that slides out of the speakers and into your ears, whereas The River follows with a more 60’s sounding approach giving both tracks their own identity while still managing to make them seem like they fit together.

Gone, the album’s closing track sounds like it could have been written for a Mod Western. Sounding something akin to The House Of The Rising Sun as reimagined by The Who. It’s a carefree, nonchalant way to end the end that is as much a middle finger in the wind as it is a parting handshake. It’s clever way to close the album on it’s boldest track that also presents the listener with a somewhat vague sense of finality.

Why Me? Why Not. shows Liam Gallagher as an artist that has fully matured, it strips away some of his more obnoxious and abrasive tendencies, and presents Liam the man rather than Liam the character and in doing so proves once and for all the thing we have long thought, that while Noel may have thought himself the brains behind Oasis, it was Liam that was the beating heart and soul of that band.

Why Me? Why Not. Given the time it requires to fully get inside of it, proves to be an album of remarkable quality and in some case nuance, and will undoubtedly go down as one of the crowning moments of Liam Gallagher’s long and storied career.