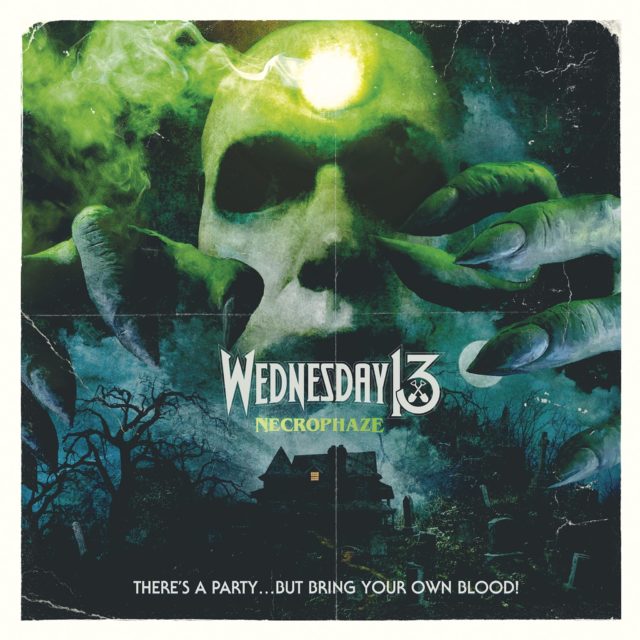 Overall Score: 8/10 songs: 8/10 theatrics: 8/10 atmosphere: 7/10 Pros: Strong collection of songs from metal's Duke of Spook Cons: Some repetition, but nothing that drags the album down

I feel like at this point, you know exactly what you are going to get with Wednesday 13. Big riffs, movie samples, horror lyrics and imagery, but also tons of fun.That’s not to say The Duke of Spook has run out of ideas though, as proved by his new album Necrophaze.

Any album that starts with Alice Cooper doing his best Cryptkeeper impression as he does on the album’s opening which is also the title track, there is also a creepy sounding synth that pulses and throbs as the track comes to life, like a twisted John Carpenter b-side, It’s a fun way to kick things off and hooks you in quicker than Pinhead in a puzzle box shop.

Bring your own Blood is an old school Wednesday 13 jam, that has some cheeky opening dialogue in the opening and the mother of all party chant choruses that is destined to become a live staple. Zodiac is inspired by the real life serial killer The Zodiac, including some samples warped into it’s intro. It is the first showcase for the heavier material that Wednesday has been developing on his last couple of albums.

Monster is another absolute barnstormer as well, featuring Wednesday paired with Cristina Scabbia,It could be described as an anti love song, but it’s just a huge slice of goth rock that will end up stuck in your brain so badly you’ll need a lobotomy to remove it.

Be Warned and The Hearse pull off the intro track leading into a main track thing very well, Be Warned being suitably creepy and sending a brilliant atmosphere before giving way to The Hearse. Life Will Kill Us All and Tie Me A Noose are both more excellent examples of how Wednesday 13 had kept his core sensibilities while pushing himself into other areas musically.

Necrophaze is one of the most accomplished and thoroughly entertaining album’s of Wednesday 13’s long and varied career. It seems him moving from the grotesque Troma punk of earlier releases and moving into a more sinister Carpenter influenced realm with thrilling results.