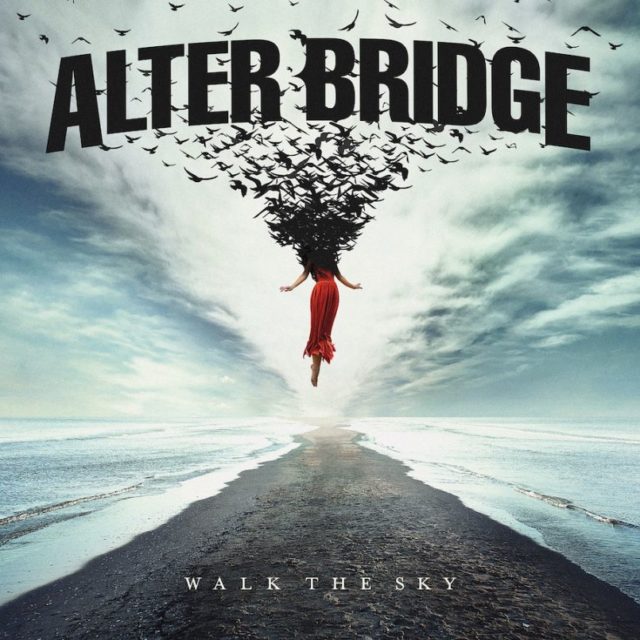 Having covered Alter Bridge extensively throughout the history of this website, Team Rock Sins has been both eagerly awaiting and somewhat apprehensive about their new album, Walk The Sky. Their last album, The Last Hero, although very well received at the time (including by us here at Rock Sins) perhaps has not withstood the test of time past the initial excitement as well as any of their other albums. Which brings us nicely to Walk The Sky. Three years on from The Last Hero, where do we find Alter Bridge?

The answer to that, is in very fine form indeed. Perhaps influenced by their time with the Parallax Orchestra working on their magnificent live orchestral shows and album Live At The Royal Albert Hall, the overall sound of Walk The Sky has tinges of both electronic elements and orchestra workings to it. As a result, this is perhaps the “biggest” Alter Bridge album in terms of its soundscape. The songs sound enormous, definitely meant for premium quality speakers, the highest quality headphones and cavernous arenas.

Album opener proper Wouldn’t You Rather produces some of the most thumping drums and bass the Alter Bridge rhythm duo of Brian Marshall and Scott Phillips have ever laid down. It’s a track that is destined to sound monstrously heavy live. This is again the case with Native Son – a thunderous main riff from Mark Tremonti is accompanied by precision drumming from Scott Philips on a track that lyrically tells a story that will resonate with many.

Alter Bridge’s best songs have often been the most emotional ones (Brand New Start, Blackbird, Wonderful Life, My Champion). They’ve done it once again with the utterly sublime Godspeed. The lyrics are genuine and moving, the instrumentation is wonderfully melodic and well paced, and Myles Kennedy turns in one of his best vocal performances in the history of Alter Bridge’s fifteen years together. The blistering first half of the album continues with recent single Take The Crown. Myles fully flexes his vocal chops on this track, with more excellent riffery from Mark Tremonti.

There’s abundant quality in the second half of the album too. Pay No Mind, one of the earlier singles from the album, is a huge standout with orchestrally influenced main riff and snappy verses. It’s very easy to see why it was chosen as a single. Clear Horizon also stands out for it’s huge chorus, soaring melodies and change of mood for its dark interlude before launching back to full force once again.

After the success of Waters Rising on the Fortress album, Mark Tremonti is again afforded the chance to take the vocal lead, on the track Forever Falling. While not quite the instant hit that Waters Rising was, it’s another fine performance from Tremonti (and makes us hope for another Tremonti solo album once this round of Alter Bridge activity is complete). The grandiose nature of the song as a whole sublime bordering on absurd vocal performance by Myles Kennedy on the album closing epic Dying Light is a truly fitting conclusion.

Walk The Sky is a truly phenomenal piece of work from a band who Rock Sins have long stated are the next Download Festival headliners in waiting. Walk The Sky is hopefully the last piece of the puzzle in helping them to achieve that goal. A finer hard rock album you will not find in 2019.