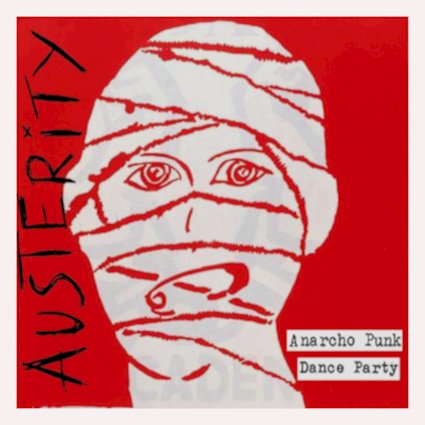 Glib social commentators predicted that Brexit and the election of Donald Trump would see a resurgence in punk. This was an incredibly short-sighted hot take as anyone who knows anything about the punk scene knows it has been thriving in the years preceding these two landmark political events. Much to the chagrin of detractors of the socialites however, there has been a rise in punk’s mainstream appeal with bands like Idles being nominated at the Mercury Awards. In this vein of punk and post-punk returning to the zeitgeist, Austerity bring us their full-length debut, Anarcho Punk Dance Party and take an acerbic, anarcho-feminist look at the problems facing contemporary British society.

With prior demo, Humanity Will Only Be Happy The Day The Last Bureaucrat Is Hanged By The Guts Of The Last Capitalist, as well as their own namesake, Austerity have a blunt perspective on the necessity for revolution. The spoken word intro track, Aaaaaaaaarrrrrghhh, outlines a manifesto of sorts as the band malign the increasing power of the far right and the burden of consumer capitalism. It’s standard fare for a punk band, but the diatribe is written with a fierce intelligence and comprehensive understanding of the reasons behind the identified issues. ‘A dark spectre is creeping into our world/A feeling of dread is descending upon us.’ This essentially sets the template for the album’s lyrical narrative. Songs like Nice Guy deal with toxic masculinity and the inherent male trait of protecting abusers, while One Man Terror Dance is a seemingly straightforward lambast of the incumbent UK government.

Musically the band are an adrenaline fuelled collision of scratchy, chaotic guitars, thumping basslines and grooving percussion. Add into this mix a bile-spewing vocal performance and you have the makings of a rather decent post-punk outfit in the vein of Sleaford Mods, Fontaines D.C. or Idles via way of XTC, Gang of Four and a hint of early Fugazi. The instrumentation supporting Glass House is wiry, off kilter and unnerving. Combined with the intonation of the refrain ‘I don’t throw stones’ the song is an unsettling anthem. The vocal work on Occupation seems heavily influenced by Jello Biafra with its lilting oddness, while White Men retains the slightly unhinged feeling of a band teetering into madness. White Men is delivered with a ska-punk panache unencumbered by the wacky factor that the genre so often feels the need to employ, so is a refreshing break in the record.

There’s an argument to be made that three white men from Brighton aren’t in the best position to critique societal ills. Bands like Nervus, Bob Vylan, Petrol Girls etc. have unique gender and race perspectives on modern Britain that makes their punk music so vital, so by comparison, Austerity don’t seem to bringing much to the table beyond wit and solid musicianship. What they do is admirable and a cause that people should get behind, but it feels ever so slightly like white privilege is an enabler for their music. Of course it’s fine for a band to lambast their own ethnic and class background, so the point is relatively moot, but it’s worth noting that their perspective is far from individual.

Anarcho Punk Dance Party is chaotic fun with a serious message. Any luddite who believes politics and music should be mutually exclusive should steer well clear of this band and their proclamations, but anyone with the common sense to see that art is reflective of society will find a lot to enjoy here. It’s not a musically unique album as the influences are rather evident and the topics are common fodder for punk, but everything is performed with a keen sense of style. As a debut LP it is wonderfully accomplished, and there’s a certainty that the band will grow as songwriters. It’s not as if the world is about to suddenly get better so they’ll have plenty to write about on album two.

The new Austerity album, Anarcho Punk Dance Party is out November 1st 2019 via Every Man His Own Football & Quiet Backwater