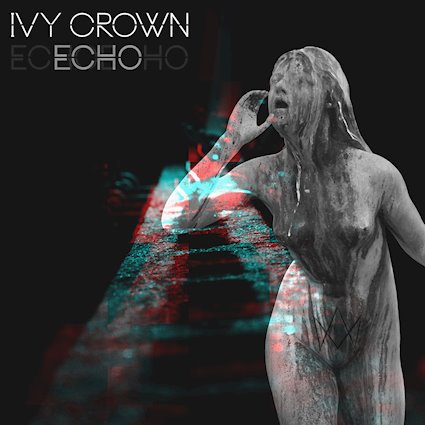 A debut album is a significant milestone. For every aspiring future star of a respective scene, it is the opening statement to a, hopefully, glittering career. As the old edict goes, you don’t get a second chance to make a first impression. Danish quartet, Ivy Crown, a band formed after the dissolution of punk outfit, Taras, are a fresh new take on metalcore, a genre that it’s fair to say has grown stale. With their debut LP Echo,the four piece look set to become a promising prospect.

Ivy Crown’s take on metalcore for the most part eschews the heavy vocal in favour of an all out melodic assault. Maria Kjær primarily sings cleanly and with impressive range across this record conjuring up stadium sized choruses on Run and lead single Lonesome and Cold. She is a more than capable vocalist and the ace in the hole of the band.

The instrumentation across the album is relatively standard fare for the genre: There are chugging riffs that hit like a hammer, open played chords for choruses that bolster Kjær’s soaring performance and a dirty, distorted guitar tone that gives the likes of Our Worst Days a bite that matches the pace. In particular the six string tone adds weight to the sub drop accompanied breakdown of this track, making for a scintillating live prospect.

The guests on this album lend credibility the band’s ability and imply a level of faith in their artistry. First off, Kim Song Sternkopf of fellow Danes, Møl, pulls off an unsurprisingly stunning turn on Lonesome and Cold, while Loathe’s Kadeem France gives gravitas to Bad Dream. Jesper Gün of Ghost Iris is perhaps the most impressive of the three guests, bringing a dextrous – if not truncated – performance to the sombre That’s What You Do.

Lyrically the album deals with poisonous relationships, standing up for one’s self and growing through mistakes. It’s hardly reinventing the wheel in a poetic sense and does walk a well trodden path. The lyrics are at their finest on Forgotten Me, a song dealing with the aforementioned venomous connections. They aren’t stunningly profound, rather taking a distinctly realistic look at the subject matter, and are serviceable once again providing room for a colossal chorus refrain.

All of this is to point out the individual components that make for a rather enjoyable record. It does however highlight the glaring issue with Ivy Crown; a lack of personality. The album doesn’t scream individuality, with every ingredient feeling as though it has been done before and in some cases bettered. Kjær’s vocals, though technically astounding, lack flair and identity sounding like every melodic or symphonic vocalist out there. Musically the album doesn’t dare experiment with the formula, though on a first outing you can forgive a band for playing it safe. Echo just doesn’t scream ‘exciting’.

What the album does do however is pique interest. The individual parts of the record are all assembled wonderfully and performed with passion. Ivy Crown have a knack for songwriting that fundamentally makes them a good band, and with these ideas fine tuned and given a unique perspective their sophomore record could well stray into the territory of greatness. This debut showcases a band with a lot to give who just need to refine delivery. Taking an introspective look at what makes each member themselves would benefit the band greatly, and we can only hope that they find themselves in future projects.

Echo is out October 25th 2019 via Longbranch/SPV