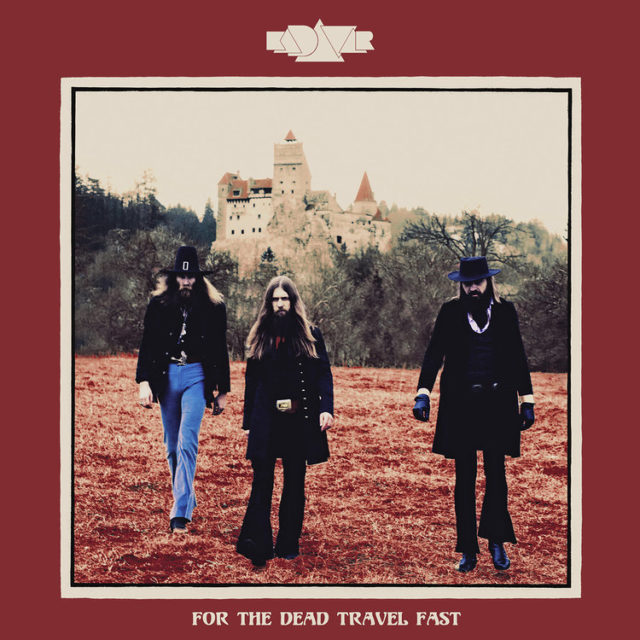 Overall Score: 8/10 Musicianship: 9/10 Vocals: 7/10 Lyrics: 7/10 Pros: Masterful harnessing of classic metal sounds and a work of real intelligence. Cons: Takes a few listens for the melodies to sink in. Not for those seeking musical innovation.

It begins, suitably, with ‘The End’, but it doesn’t end with ‘The Beginning’. If ever an album was styled to hark back to the birth of metal then “For The Dead Travel Fast” is it.

It’s washed-out, muted coloured sleeve photo features the band resplendent in flares and Witchfinder General hats, in front of a Transylvanian castle. Indeed, this album could be whisked straight off the pressing plant and placed in a cabinet at Birmingham’s Home of Metal museum, convincingly labeled as a contemporary of Black Sabbath’s seminal debut.
What exactly is the point of all this painstakingly reproduced rock antiquity, you may ask yourself? Is it merely the work of enthusiasts, uber-fans for whom all recorded music past say ‘Sabotage’ is either false metal or frippery? Well, if we listen closely then we may just begin to divine a reason…

‘The End’ opens with not much more than howling winds and an eerily strummed guitar as Christoph “Lupus” Lindemann’s creepy keening vocals drift in. His voice takes a turn into the beautific before, after nearly two minutes a riff kicks in. The song has the dank, Hammer Horror VHS tape vibe of Uncle Acid’s “Blood Lust” LP but aims not for video nasty grot but for something more ancient, spiritual even. ‘The Devil’s Master’ possesses a similar aching, questing heart. There is more thunder in the rhythms and agitated riffery, but the track remains poised between enlightenment and evil.

‘Evil Forces’ is classic with a capital C metal, and like a lot of what follows heralds back to early Scorpions and Judas Priest. Whilst I recognise and appreciate those bands’ contribution to the music I love they are not sounds I regularly return to. However, Kadavar not only recreate it, but they also breathe life into and make it seem vital. But why does it have that effect and what’s it all about? If, reductively, “Berlin” was their confident, hedonistic album and “Rough Times” their protest album then “For The Dead Travel Fast” is harder to pin down. What is apparent though is that an air of melancholy infuses the songs and the decision to drop the bands punkier influences and dwell entirely in early-to-mid-70’s old school metal is as much about summoning a wistful air as it is celebrating some key influences.

The song titles – ‘Dance With The Dead’, ‘Children of the Night’ etc. suggest pure horror fantasy escapism, but appear to actually be allegorical or based on the band’s experiences. ‘Children of the Night’ seems to be a remembrance of youth, and of the fear their snotty leather-clad appearance used to cause and a celebration of carefree days when there was no tomorrow. It may be as much a critique of the homogenisation of metal as a paean to rebellion, but either way, presenting it in the form of very traditional heavy metal is either perverse or inspired. Or possibly both. ‘Dance With The Dead’ which has the baroque, flamboyant wickedness of Ghost’s debut again suggests reflection as Lupus croons “I’m gonna build myself a castle”. These then are songs of men who grow weary of the world.

There again ‘Poison’ is livelier and is a link back to “Rough Times”, railing against those with money and power. It has a swashbuckling riff and a lyric full of the bitterest bile but then the pace and tone drops, leading into a surprising resurgence upon a gorgeous fuzzy guitar crescendo.

The raging ‘Demons In My Mind’ with it’s swirling, psych chords and pounding bass of Simon “Dragon” Bouteloup and drums of Christoph “Tiger” Bartelt are like prime Hawkwind – not the first time the band has taken inspiration from rock’s druggy overlords.

Perhaps unsurprisingly it’s followed by the mellowest track on the album, and ‘Saturnales’ soft, sweet resonance is a masterful piece of musical balm. The melancholy is heightened by haunting cello and a production that is akin to positioning the listener between ancient standing stones at dawn as the wind howls around you.
The closing ‘Long Forgotten Song’ begins in similarly restrained fashion before heading off in a heroic metal gallop which keeps being brought up short as a doom metal rider pulls hard on the reins. When the song bursts into a more celebratory melodic swell the song begins to reveal itself as a complex and ambitious finale. Everything you want from classic, Sabbath inspired metal is here – drama, brooding heaviness, melody, and invention. What a way to finish.

It is obvious, after a few plays, how much skill has gone into creating this album. At first look, you could dismiss it as yet another Sabbath fan-boy knock off by hairy blokes who wish it was 1971 again as the drugs were cheap and the chicks were pliant and plentiful. Yes, you can just enjoy it as a tribute to rock’s past but Kadavar has not only lovingly reproduced the style, they have subverted it to their own ends whilst crafting a very impressive set of songs that reflect them as artists. Bloody clever stuff. 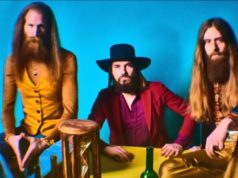