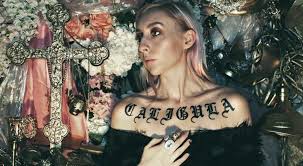 As the rain lashes down on a miserable September evening, entering Oslo could not be more refreshing. It’s warm, cosy and serves a good selection of beers: Basically, it is welcoming. It is the antithesis of the evening planned upstairs from the bar-cum-restaurant, as something of real extremity, genuine anguish and cathartic resonance awaits us. Something that some would label evil, but they would only have a surface understanding of the torment that has gone in to tonight’s show, the abuse suffered, the heart broken, for tonight is not simply a performance of music; it is a demonstration of ‘survivor anthems’. Any old sod can write an evil sounding song that skirts extremity, but no-one you can care to mention, be it Napalm Death, Full of Hell or even Scott Walker, can touch the visceral intensity of an evening in the presence of Lingua Ignota.

First up were avante garde noise rockers, Bruxa Maria. Their music sounds somewhat like Canada Songs era Daughters mixed with the pedal wizardry of someone like Raketkanon, but is certainly shriller and more throaty, at least in terms of vocal delivery. The music is dynamic, though the band quite static save their frontperson who has a decidedly punk flair to her motions. It’s hardly the most visually arresting of sets, but the music makes up for any lack of fluidity to the band members’ movements. Coarse, punky and full of brash noise, it’s a winner and a fantastic start to the evening. When you wonder ‘Who could possibly support Lingua Ignota?’, seeing Bruxa Maria in action makes sense as part of a cohesively structured evening. [7]

Starting with a low din of instruments feeding back and the slapping of a bass drum, Grave Lines feel suitably dark for the evening from the off. With a post punk/metal meets doom via way of folk sound that is reminiscent of Joy Division’s Atrocity Exhibition from the seminal sophomore, Closer, Grave Lines stand as four wounded people pouring every ounce of their being into their apocalyptic music. Their projected background screams Neurosis, while the guitar tone has shades of Old Man Gloom, all making for a succinct, multifaceted and emotionally resonant package. The long gaps between the first few songs do the band no favours as it disengages the audience from the aural assault, but when the set is in full flow everything is prescient for the evening: Four anguished persons making metallic music that hurts as much as it entertains. How much it entertains is certainly up for debate as the songs, particularly the finale, seemingly stretch on without end – not a problem for post music – but without any of the dynamic build that makes a song worth listening to. Not quite perfect, but not an awful choice of support band for the main event. [6.5]

Many bands po-facedly attempt to call their shows “rituals”. It is an irritating habit amongst the more pretentious of the heavy ilk that does no favours and for many starts the evening off on the back foot. What we in Oslo, Hackney witnessed tonight was not a ritual; it was an exorcism. Kristin Hayter, better known by her stage name of Lingua Ignota, is no stranger to harrowing experiences. Her second album, Caligula, that makes up the entirety of tonight’s setlist is in particular an account of the abuse she has suffered at the hands of wicked partners hell bent on the physical, mental and emotional destruction. It is a sordid tale filled with rich anguish, deeply traumatic soundscapes and a cathartic release that is as bleak as it is rewarding. In order to fully cleanse herself of the demons that still rightly haunt her, Hayter has brought her one-woman stage show on tour so that we may all bask in the nightmarish hellscapes that are her experiences.

Her voice is one of both indescribable beauty and repulsive shrieking. As she moves fluidly between her operatic vocal range and the howls of torment, you get a sense of the pain this woman has endured, but the strength of her conviction to carry on and not let man drag her to defeat. The diametric opposition between the divine and the infernal makes for a dynamic and enrapturing set, for the most part. As IF THE POISON WON’T TAKE YOU MY DOGS WILL reaches its crescendo, Hayter appears to be on the verge of tears. This song is written to a dear friend, urging her into self-mutilation – “make worthless your body” – and ultimately joint suicide so that “no man can break it [her body]”.  “Life is cruel, and time heals nothing” wails Ignota, her heart almost visibly breaking as she delivers the lines that may well serve as a mantra. You can feel the awe in the room, the deafening absence of applause between songs speaking to the unifying effect her words have over the sold-out crowd. The low boom of the timpani that reverberates through the venue shakes the sweat from the dripping walls, juxtaposing the whispers of sorrow from our performer, while her piano moves from gentle to terrifying as she smashes the ivories with unrestrained anger. In the hands of a lesser performer, the triggering of much of the musical accompaniment would feel as though it were cheating, but with Ignota at the helm, it feels an integral part of the show. As she holds a bright, glowing fluorescent light high above her head, looking down on the faithful mass below, things begin to reveal themselves.

All of this is not to describe the actual performance; which is the correct term as sadly, it does feel like a performance. There is a modicum of insincerity to Hayter/Ignota as she delivers lines such as “I don’t eat, I don’t sleep”, feeling as though these words are being affected simply to satisfy the expectation of an audience waiting to be transported to a world in which nightmares are a reality. This is not to undercut the visible fear on her face during IF THE POISON…, but for much of the rest of the set it feels like a student project telling a tale it had once heard of abuse, rather than a woman living and breathing those ghastly experiences. Yes, it would be too much to ask of Hayter that she relive the horrors she endured each night simply to entertain us as Ignota, but unfortunately the effect and promise of Caligula is too great to be recreated in the live environment. It is an album of transcendental beauty and triumph over evil in which the prototypical victim becomes the victor, but it is an album that does not belong on a stage. Hayter should not have to subject herself to such barbaric self-harm as that, even if it does appear to be Ignota’s act, no matter how well acted it is. She has a penchant for the theatrical, but seemingly fails to invoke the real. It’s a puzzling end result as Hayter’s work is so deeply personal, so meaningful to her and others – to the point that the Caligula tattoo seen on the album’s cover is a real piece of body art – so why it doesn’t fully translate is an open ended question.

There’s a sense of disappointment as Ignota leaves the stage and the congregation moves from the sweat covered venue. It is not that the performance was not a sheer, visceral attack on the heartstrings, but rather that it all felt somewhat fake. Ignota is a masterful performer, but Caligula is not the right material to perform with even an iota of insincerity. Perhaps it was simply down to the evening; touring is exhausting with even the most upbeat of songs in an arsenal, so subjecting oneself to the same agony time and again must be beyond draining. Sadly, tonight was not Ignota’s night, nor was it Hayter’s. What promised to be a possible event of a lifetime simply lands as a very good show, but one not best suited for the stage. [8]