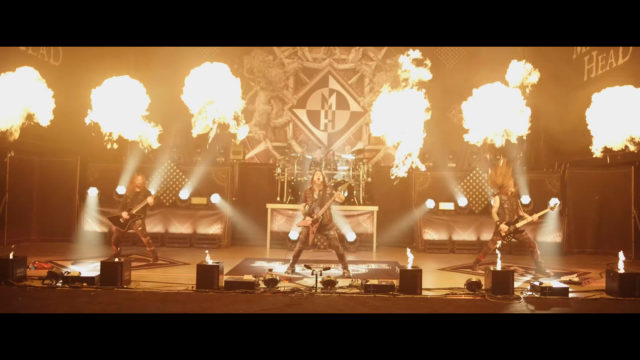 Just as Robb Flynn and his assorted two line ups of merry Machine Head men head to our side of the Atlantic for the first instalment of the Burn My Eyes 25th Anniversary Tour, they’ve dropped a brand new single. “Do Or Die” is the first new music from the new look Machine Head line up of Robb, Jared MacEachern and Vogg Kie?tyka. For Do Or Die, they were joined by Carlos Cruz of Warbringer and Power Trip behind the drum kit, ahead of Matt Alston taking up the position for the tour.

You can check our the flame filled video For Do or Die below:

“‘Do or Die’ is three minutes and 45 seconds of unadulterated, neanderthal rage. FUCK EVERYONE!”

Robb Flynn on Machine Head’s new single Do Or Die

For the Burn My Eyes 25 tour, Machine Head have resurrected their wildly popular “An Evening With” format, splitting the show into two distinct sets. The current Machine Head lineup will perform a mixture of songs from across the band’s back catalogue, including the always crushing and iconic Imperium.

The second part of the evening will see Robb and Jared combine with original Machine Head members Logan Mader and Chris Kontos to rip through their acclaimed debut album in full. The UK dates for this tour, apart from Belfast, have sold out, so it’s a good job they are bringing the tour back again next year for further dates in Birmingham and a huge show at London’s Alexandra Palace at the start of June. The full list of shows follows below – pick up your tickets here:

For a taste of what a Machine Head live show can be like, if you’ve not experienced one before, check out this review from when they dismantled the Roundhouse in Camden a few years ago.