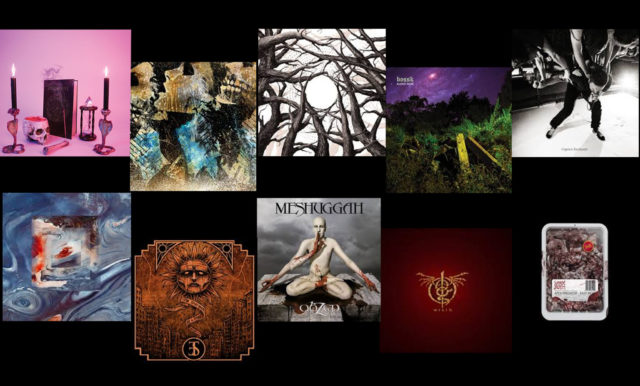 When it comes to riffs in heavy music – the lifeblood of the style – you see the same names crop up time and again. Admittedly it’s with good reason; who doesn’t love the work of Iommi, Hetfield, Dimebag etc.? But so often we see listicles that feature the same ten guitar phrases, and frankly there is so much out there that needs championing but doesn’t get a look in. Presented for your aural pleasure are these 10 riffs you may have overlooked:

The accidental godfathers of djent know their way around a six (or eight) string. Throughout their careers Meshuggah have penned riffs of such mechanical and brutal dexterity that picking a favourite is a thankless exercise in masochism. Whether it’s the screeching intro to Future Breed Machine or the unfathomable rhythmic triplets of Bleed, their penchant for penmanship knows no bounds. However, their most elastic and obtuse riffing came on the critically acclaimed ObZen, in particular on the oft overlooked opening track, Combustion. The opening notes of this song are a contorted, bouncing loll through the minds of biomechanical musicians who care not for regular time signatures, and it stands out as one of the very best moments Meshuggah have put out.

There are a plethora of interesting riffs and musical ideas on The St Pierre Snake Invasion’s second album, but with its histrionic, sliding delivery the opening gamut of Casanovocaine  is a teeth clenching, fist swinging torrent of excellence. The heavily distorted production of the rhythm guitars allows this wiry attack to cut through the sonic barrage, and makes for an adrenaline pumping assault on the senses. Caprice Enchanté isn’t short of brilliance, but the opening phrases of this song are perhaps the most (soon to be) iconic that the band have achieved thus far.

Napalm Death, the legendary Brummy kings of grindcore, aren’t often praised for their riffs. This is mainly due to them being so truncated that it’s hard to fix yourself in place to enjoy them for more than a fleeting moment, but also because the band trade in percussive stabs rather than Sabbath worship. However on 2015’s Apex Predator/Easy Meat, the band threw convention out of the window once again – a mainstay of their sonic evolution – and allowed themselves the time to indulge in fretboard wizardry. This is never more apparent than on How The Years Condemn: Pinched harmonics make up the majority of this tightly wound expressive motif, feeling as though it is fit to burst by the time the open played verse riff explodes into your ear canal. It’s an exercise in restraint and dynamism as it mirrors the brutality of the song’s other components by brooding and implying a forthcoming sense of dread, rather than going straight for the jugular.

Sometime a simple riff is the most effective. With Entombed, Puppy channel the spirit of Pantera’s Walk, playing hammer-ons between an open string and the first fret with a vicious and lingering intensity. The riff is basic but has passionate delivery flowing through it, and despite its relative ease it shows itself to be versatile: Palm muted during the verse it blooms into a fully fledged melodic chorus and gives way to a blistering solo that would make Weezer think twice about their abilities. The riff in question bookends the track and does so with a sense of urgency, as well as menace. This is just one of the many phrases Puppy have brought to the world, and it’s likely to be surpassed on future records, but for now this is their crowning achievement.

Blackened hardcore mastery is a tricky thing to achieve, but Svalbard do so with ease. The very first thing you hear on the utterly sublime, It’s Hard To Have Hope is the rousing riff of Unpaid Intern, and it kick-starts a journey you won’t soon forget. Rising and falling through notation it sees a powerful amount of fury channelled through the deft musicality of vocalist and guitarist, Serena Cherry, and is enough to start riots for fairer pay. For a riff to do all that is one thing, but combine it with the fiercely intelligent and prescient lyrics and you have yourself one of the best songs in recent years. The harmonies achieved in this motif are blissful, and the performances of said phrase exquisite, and it stands as one of Svalbard’s best moments.

5. Employed To Serve – I Spend My Days (Wishing Them Away) (Main/Chorus Riff)

Employed To Serve are definitely a buzz band right now. Having released the truly excellent Eternal Forward Motion earlier this year, the band are riding the crest of a wave that will surely only take them to bigger things. On their second album, The Warmth Of A Dying Sun, they battered the listener into submission, not least of all with fan favourite, I Spend My Days… which centres around a hulking, sliding riff that strangely creeps around the mind despite its bombastic appeal. The moment in question is a distorted ideal of what the guitar can be within the hardcore genre; rather than thrashing choppy attacks, it can be a tool for ascent through darkness, as this bending serpentine riff proves.

Black Peaks are arguably one of the greatest bands to have emerged in the last decade. They intertwine influences from the likes of Tool and Mastodon into a progressive post-hardcore package that is utterly delightful. Any one of their riffs, be it Glass Built Castles, Saviour or Can’t Sleep could be in this slot, but the one that carries the biggest promise, the one that foreshadows their undoubted future greatness is that of the riff that bridges Fate I & II. Angular yet pleasing, it stands without accompaniment in the track, solitary yet resolute and packed with brilliance. Joe Gosney is a modern day guitar hero, and this small section of the song shows his dexterous flair in all its glory.

Lamb of God are a band fabled for their riffing prowess. Redneck and Laid To Rest are iconic in the world of groove metal and beyond, while deeper cuts like Ruin still get the credit they deserve. One hugely overlooked section of six stings however is the chorus riff to Choke Sermon from their 2009 opus, Wrath. Willie Adler speaks of the ‘good time feel’ he tries to inject into LoG’s music, and this riff is the epitome of party time Lamb of God: Bouncing, rollicking fun, it ascends through the minor scale with fierce verve and is topped off with a pinch harmonic. You can’t ask for much more than that, and as it rounds out the track it sounds a resounding call of triumph. Easily Lamb of God’s underrated gem, this song desperately needs a live airing sooner rather than later.

Finding a highlight on Bossk’s ridiculously sublime debut, Audio Noir is nothing short of impossible. It is a post-metal album of such beauty that it stands shoulder to shoulder with the likes of Cult of Luna, Neurosis and Isis without looking out of place. However, the stand out, all out riffs of the album are those that occur throughout Atom Smasher. Sabbathesque with a hint of Pantera’s groove, they weave an intricate tapestry of emotional burden, and they bloody slam. The opening riff in particular builds to a crescendo that leaves necks snapped and bodies pummelled in the live environment and is so great it could reduce a metal fan to tears of joy.

Converge are a legendary band, obviously. What they have done for metallic hardcore cannot be overstated, and on Axe to Fall they achieved their greatest moment of riffage, especially on opening track, Dark Horse. Vehemently imperative, the motif lunges at you with speed and dexterity, enrapturing you in a spiralling frenzy and flurry of notes. The song itself is concise and punchy, with barely a moment’s respite. Kurt Ballou’s guitar work is at the apex of his powers (so far) on this song, and you can’t help but feel that it will never be bettered. By any band. Ever. The greatest riff of all time, Dark Horse is an absolute necessity.