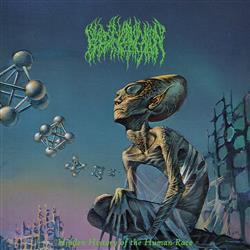 Topping the Decibel album of the year list before its release sets up the latest Blood Incantation record with some lofty expectations for the rest of the listening world. Surely the hype from appearing atop such a list cements it for a fall. Fortunately, Hidden History of the Human Race is an extraordinary album. It is an album of crushing dexterity, horrifying skill and lugubrious songwriting that plays with conventions and expectations. It may well be the best death metal record of the year.

Opening with a flurry of pinch harmonics and oppressive guitars Hidden History… starts out very much as a death metal album. It’s not new, it’s not innovative but good Lord does it scratch an itch in the lizard part of the brain. Invoking the best of the Floridian scene’s finest with a touch of Slayer-isms in the lead guitars’ histrionic squalling, Slave Species of the Gods  is a delightful track that doesn’t deign to reinvent the wheel, but instead turn it on an axis into something wonderfully violent. The intricacies and technicality are astounding enough, but it’s all wrapped in a package of coherent songcraft that elevates it to deified levels. To do all this while remaining within the framework of an age-old genre is rather special, but then, to paraphrase Bad Boys II, shit gets real.

As The Giza Power Plant reaches around a third of its run time, it breaks into a clean, Byzantine, free flowing jam section that feels at once meticulously put together and off the cuff. While much of the rest of the song does delight in its barrage of spidery riffing and pinches thrown in for good measure, it’s in the disparate breaks that Blood Incantation stand out from the crowd and make this four track record something undeniably laudable. The album defies expectations of death metal by proving that it’s not all cartoonish misogyny, and indeed needs to look ahead. Look to the stars.

Blood Incantation do indeed have their sights set on the stratospheric lyrically, philosophically and in terms of their own success. This is a record that will propel them into the upper echelons of death metal’s finest stalwarts and deservedly so. While The Giza Power Plant may borrow a few ideas from fellow luminaries, Nile, the cosmic attitude of the album’s second half is unlike anything attempted in large swathes of the genre. It sees a band not afraid to take a broad look at existential ideas and they do so with a furious panache: Inner Paths (To Outer Space) is a bold and expansive thought piece that has as much in common with post-music as it does death metal. Awakening From The Dream Of Existence To The Multidimensional Nature Of Our Reality (Mirror Of The Soul) is as verbose and bombastic as a title of that length warrants.

This is a stunning album, there is no feasible argument to be made against it. Even non-death metal fans will find plenty here to grab onto as the record is filled with hooks, as unapparent as they may be on first listen. The likes of the finale showcase a band with a broad vision and a want to expand the genre beyond its constrictive limits, and everything is done with some of the finest musicianship of the year. There is barely a blemish on this refined, taut record that doesn’t get bogged down in needless meandering through riffs that will only impress the musically minded. Every moment is consciously planned out to create wonderful songs. The long run times might imply a bloated set of tracks, but listening to the leanness and focus of the outfit quickly and viciously dismisses that thought. Blood Incantation are aiming for the cosmos, but actually they need only look at themselves for they are death metal’s shining stars.

The new Blood Incantation album, The Hidden History of the Human Race is out November 22nd via Century Media Records