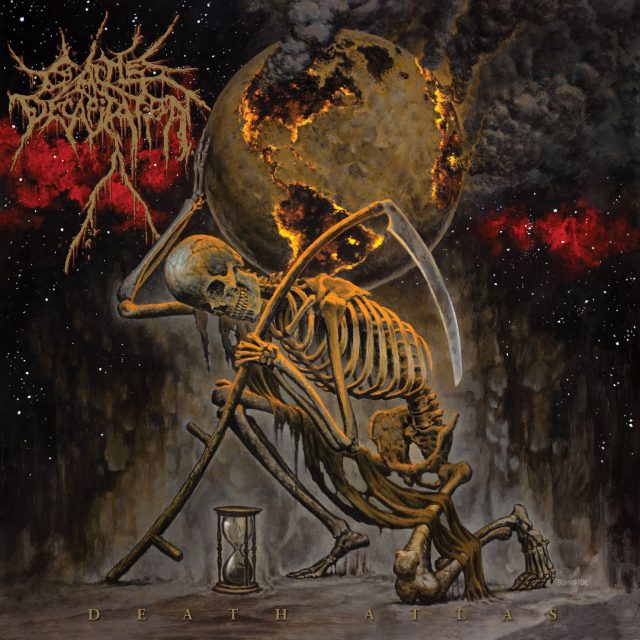 From the artwork of Death Atlas you can be fairly certain you’re not in for a pleasant listen. Not just because it’s Cattle Decapitation coming at you with the force of seven sledgehammers with their technical, deathened grind, but because once again we get an album that looks at the bleakness of humanity. A look into the destructive force of human kind. As said in interlude track, The Great Dying, the planet is facing its “sixth Extinction event. The cause: Humans”. It is once again a vehemently ecologically minded record that harbors bile for mankind’s misuse of the Earth, and isn’t afraid to spit venom in order to get its message across.

After a lengthy intro track there is a single beat. A flurry of screams and hypersonic percussion, tremolo picked riffs and ironically meaty bass – the band are staunch vegetarians – assault you with skin flaying panache. The Geocide is a hard hitting, grooving monster replete with a chorus you can screech along to. The dexterous and high velocity musicianship on display should let someone for whom this is the first experience of Cattle Decapitation know that they are dealing with serious musicians with a serious point to make. The lyrical narrative about planetary destruction is nothing new for Cattle Decap, but feels far grander in its ambitions, matching the instrumentation which is a fair amount wider in breadth and scope than their early records. It’s more melodic than they have been in the past, and feels like a step onwards from Monolith of Inhumanity and The Anthropocene Extinction. This is a band that have evolved and it feels like they’re on the cusp of a real breakthrough.

Travis Ryan lives up to his reputation as one of the most skilled extreme metal vocalists in the game. The adept transitions between growls, screams and gargles on Be Still Our Bleeding Hearts is as good as it gets in this broad genre, with perhaps only Dave Hunt of Anaal Nathrakh pipping him to the post of most dexterous extreme singer. The dual layering on Vulturous is skin crawlingly evil, and introduces a blackened element to proceedings; this is matched by the spidery riffing of guitarists Josh Elmore, a long serving member and the relative newcomer, Belisario Dimuzio who joined the band full time in 2018.

The album as whole isn’t hugely dynamic, moving – admittedly fluidly – from barrage to battering one after the other with only interlude songs giving you a breather. This is of course a very good thing for fans of aural battery, but does let the album down ever so slightly as there’s little differentiation on tracks bar a riff or middle section here or there. The songs generally follow a formula that is tried and tested; open with a torrent of visceral heaviness before moving into a slightly more melodic chorus followed by a heavy breakdown. Rinse and repeat. You’ve got the record done. For fans of straight-ahead pummelling this record will be one of the best of the year undoubtedly. For those looking for a bit more than impressive musicianship designed to crush the skull, you may find yourself flagging come the album’s end.

But this is a very good record, there is no question. The songs are well constructed, if somewhat sticking to a rigid formula, and the performances are unequivocally phenomenal. What it lacks in dynamism it makes up for in all-out pain, though this is not to forget the intellect of the lyrical narrative. While violent in their declarations, they make a salient point that does need to be hammered home about the self-imposed annihilation humanity is heading for. “We’re flying too close to the sun// We play with fire… “, seems a good summation of this record. Cattle Decapitation are aiming to recapture the grandiose heights of the genre as they did with The Anthropocene Extinction, but just fall short due to a record that lacks variety, despite a prescient narrative. Perhaps the unrelenting attack of the music is a far grater metaphor for the necessity of Cattle Decapitation’s main point, but in this instance it doesn’t quite hit the mark and instead makes for a, yes, thrilling but ultimately exhausting journey.