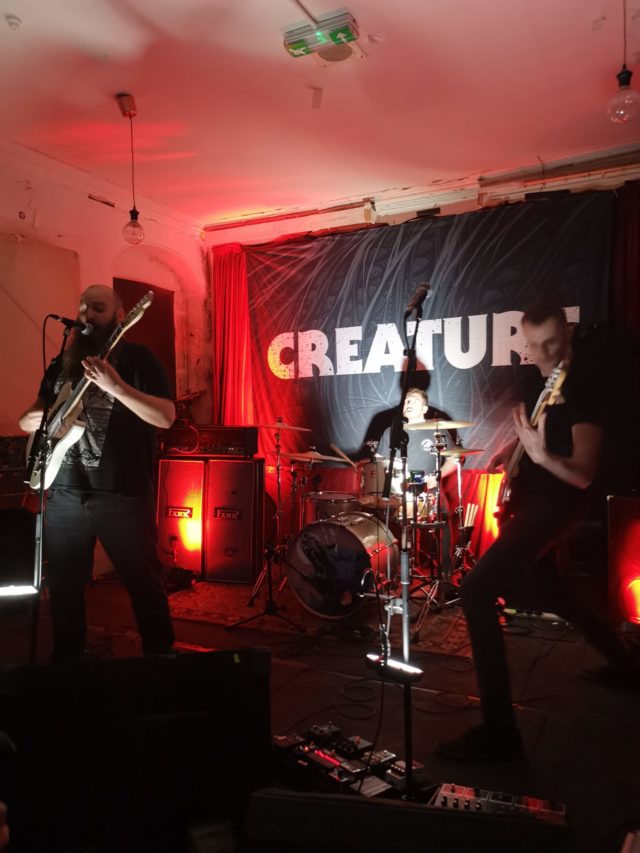 Being in a small crowd is often somewhat embarrassing. You feel for the band who are pouring their hearts out in musical form to a sparse, echoing room and feel uncomfortable and unable to truly enjoy things to a maximum potential. That’s usually the case. Tonight however there’s a smugness about being in attendance of one of the UK’s most exciting small bands in such intimate setting. We’re here for the beginning of a hopefully illustrious and spectacular career. It could be one to tell the grandkids about, and fortunately for the few in attendance, CREATURE play a set steeped in excellence.

Opening with Cold Man’s World from second EP, HOUND, the band are on roaring, bestial form from the off. Grinding guitars played with dexterity sit atop a thunderous and insurmountably skillful rhythm section, all topped off with barked and growled vocals that call to mind the best of heavy music. You can name check Jacob Bannon’s bark, Dimitri Minakakis’ scream and George Fisher’s growls in James Thompson multifaceted performance across the set, but at the same time he doesn’t sound just like these luminaries, merely influenced by them to perform uniquely.

Musically, the set features a rainbow of influences, from the chaotic hardcore of Converge and Refused, to the post-hardcore introspection of Thrice or Thursday. It’s hardly a surprise having listened to both HOUND and HEX multiple times across the year, but hearing all of the instrumental nous in a live setting more than does justice to the crushing EPs and consolidates all the hype surrounding the Brummy triumvirate. It’s in the new songs from the upcoming trilogy’s end that we get a hint of something different; first track, All, has an almost Sisters of Mercy style vocal harmony as they utter the line ‘When your heart stops beating’ in a drawling baritone. Meanwhile the second unannounced song has a rocking swing that grooves through the mighty PA as Thompson hammers on and off across the fretboard with gliding elegance.

The extended outro on Black Dog is heavier than a bag of spanners on Jupiter, smashing the modest crowd with a breakdown that outperforms most of the year’s deathcore releases, and finale, Lifeless, is a sterling way of rounding out an all too brief set. If there is a criticism, it is the faintest possible as you are simply left wanting more of what it is that CREATURE do, and don’t feel like they’ve hit their potential. It’s barely critical and actually frighteningly exciting. Where this band will end up is any one’s guess; music isn’t a meritocracy – otherwise Primus would be as moneyed as Ed Sheeran – so skill alone won’t get CREATURE to the top, but the restrained, seething chaos of their live show certainly ought to. This band are hungry and not looking to take prisoners. Do not miss them the next time they come around. They won’t be in venues this small for long. Britain’s next bit thing. [8.5]