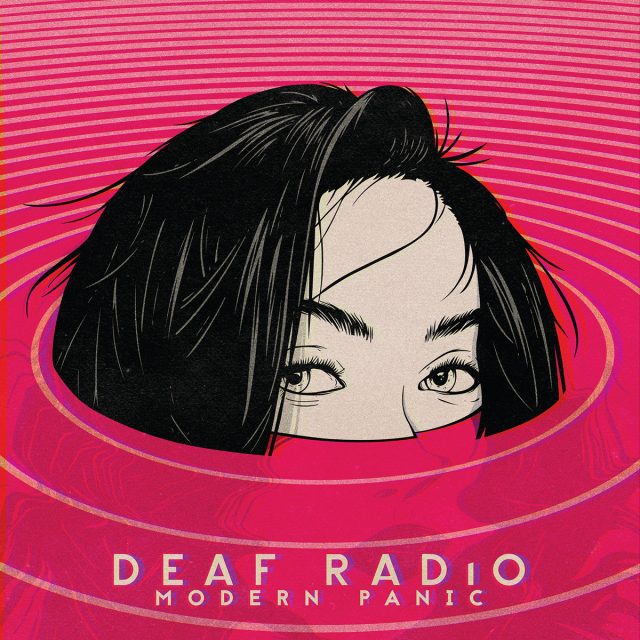 Greece isn’t a country famed for its musical exports. What it did in defining philosophical, mathematical and political ideologies and formulae is unparalleled, but aside from a handful of outfits, there aren’t many household names to emerge from the Hellenic Republic. You can cite 1000mods as an alt band that have seen some success, and on the heavier end of the scale Septic Flesh, Rotting Christ and Firewind are the only really notable modern examples. There is however a new player in the Grecian alternative scene, a band that before releasing even their second record have shared stages with The Killers, All Them Witches and The Kill. With their sophomore release about to drop, it seems a fitting time to look into Deaf Radio, and their new album, Modern Panic.

After a jaunty introductory track, aptly titled Intro, a pre-...Like Clockwork Queens Of The Stone Age style riff opens first proper song, Death Club. With histrionic accents in the chorus and bridge, this is a song that could easily have appeared on Rated R, replete with lightly distorted vocals to give the work a sleazy edge. It’s a hip swinging, grooving number that sets the scene for the record with heavy percussion thundering into the ear drums to make sure you dance along. The following track, Animals, is a far more relaxing experience, with a soft falsetto putting you at ease as the gently played guitars slide around ethereally. The linking factor between the two seemingly disparate songs is the band’s panache for stadium sized choruses. Both Death Club and Animals feature vocal melodies that are instant ear worms, and deceptively simple lyrics that will stick in mind by the end of the first listen.

The record as a whole is fairly dynamic, moving from the aforementioned QOTSA riffing to more contemplative and ambient jams with style and fluidity. The 4/4 beat and swing of Dance Like A Reptile is worryingly infectious and cements to desert feel of much of the album, while lead single Astypalea is gentle and reflective in its intro before launching into a sombre rock number. The shimmer of Panos Gklinos and Dimitris Sakellariou’s guitars on Astypalea and Gas Station People stand out within the record as particularly ambient against the more rough and ready, arid feel of the upbeat numbers, while a middle ground between the spacious and the suffocating dryness is found on the title track.

As good as the opening salvo of songs is, Deaf Radio hit their stride in the record’s latter third. Colours, Fossils and finale, Gas Station People showcase the most coherent songwriting on an album chock full of dexterity and understanding of structure. The overtly desert feel gives the record a US flair, perhaps diminishing Deaf Radio’s own identity, and really your enjoyment of this album will come down to how much you like Queens… as there is plenty of Homme worship in both the song structures and Gklinos’ vocal style. This feels like a record in conversation with the best parts of the critically acclaimed …Like Clockwork, and the underrated Era Vulgaris.

There is a worry that Deaf Radio are struggling to find their own niche as an outfit, trading on others’ glories somewhat. However, they do so incredibly well and it’s only natural that a band may take time to find themselves, especially after the shock success of their debut record, Alarm. Rocking the boat without securing a dedicated fanbase is not a business savvy move. Finding a unique voice as a band is a difficult task, and for many is unattainable, but there is enough in the likes of Fossils to prove that Deaf Radio could strike out on their own and move beyond the safety net of wearing influences in their sleeves. If they can find confidence in an individual voice, album three could be a world beater.

The new Deaf Radio album, Modern Panic, is out November 15th via ihaveadrum.