It’s time once again for Rock Sins’ annual end of year awards feature series! This year, for the first time, we have some guests joining the process, both musical and some writer friends of ours, but kicking things off to start with is our features and live editor, Jamie Giberti.

From the moment this album passed my ears at the beginning of this year, it felt like this was always going to be the one to beat, and so it was. Perhaps the most bleakly beautiful album I’ve ever heard, it mixes tragedy, acceptable, despair, hope and views on the past and the future in a swirl of gothic infused doom metal into a truly hypnotic set of songs. While I very much wish that the reasons behind this album hadn’t come to pass, for Swallow The Sun’s creative mastermind, Juha Raivio, to express his emotions in this fashion is quite stunning. This years’ undisputed must hear album in a year full of brilliant releases.

Single Of The Year – Slipknot – Unsainted

This has been such a hard category this year. There’s been so many brilliant songs that it has been very hard to choose one, but ultimately, Unsainted has everything. The haunting intro, the mega chorus, the heavy sections, everything you’d want from an absolutely fantastic Slipknot song. Plus my daughter loves it and it has been something else we’ve bonded over, so its got an extra special appeal on a personal level.

I’ll try not to repeat myself too much from the show review of this absolutely absurd evening from a sunny Milton Keynes in early July, but Rammstein took things to a level that even Rammstein previously haven’t hit. A ridiculous, glorious, over the top in the best possible way celebration of everything that makes heavy metal, and Germany’s favourite metal export, the best live act on the planet in any genre. We didn’t give this show 11 / 10 for nothing!

Perhaps the only other band on the planet who could currently live with Rammstein in their 2019 live performance form, Slipknot delivered in a way in 2019 they haven’t managed at Download since their breakthrough headline performance a decade earlier. The masked Iowan nine piece were at their ferocious best as they ripped Donington Park a new one for close to two hours, with Corey Taylor controlling the legions of maggots present from start to finish. One of Download’s best ever headliner performances in the history of the festival.

Most Disappointing Album Of The Year – Leprous – Pitfalls

I’m going to caveat this selection with the acknowledgement that I’d not listened to Leprous prior to this. An awful lot of my friends had, and they’d sold them to me as one of the best new alt/prog bands of the last decade or so, so I was excited to check out their new album Pitfalls. Unfortunately it left me cold. I’m (now) fully aware of this being a tangent on their old material, but the vocals as much as anything just did not click for me at all. A valid reminder in that you’re not always going to like what your friends and peers do (see also, Ghost, Code Orange).

Video Of The Year – Devin Townsend – Spirits Will Collide

Devin Townsend’s music, be it on his own, with The Devin Townsend Project or in Strapping Young Lad, has often seemed other worldly. So, to find him literally playing for a huge crowd in the celestial cosmos seemed the most wonderfully appropriate setting for the video of Spirits Will Collide. There’s been some truly fantastic videos this year, but this is the one that connected with me the most.

There is nothing better than seeing new bands succeed, or bands recognising their potential. Both Dream State and Holding Absence are bands I’ve been championing heavily for the last two years, and 2019 has very much been a breakthrough year for both. Their debut full length albums, Primrose Path and Holding Absence, are two of my top 5 for the year, they’ve both played some fantastic tours and one off live shows, and are set for even bigger things next year (currently looking like a new album from Holding Absence and their biggest tour and festival sets to date for Dream State). I couldn’t choose one over the other, so I had to choose both. I cannot wait to see what these two wonderfully talented young bands do next year. Just one request, tour together? Please?

Bury Tomorrow are a band I’ve loved ever since they dropped the brilliant The Union Of Crowns back in 2012. What some may or may not know (largely depending on whether they follow him on Twitter or not), is that their frontman Daniel Winter-Bates, when he’s not in Bury Tomorrow, works for the NHS. His Twitter feed this past year has been a continuous discussion of positivity around mental health, positive change both in terms of the music industry and his job with the NHS, as well as creating safe spaces for people within the Bury Tomorrow fanbase with meetups prior to their live shows. With the NHS needing to be stood up for more than ever before, Dan is juggling his two worlds in such a brilliant way.

That concludes the start of our first end of year awards for 2019! Keep checking back each day for more awards from the staff, as well as some very special guests! 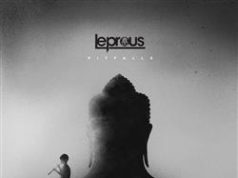