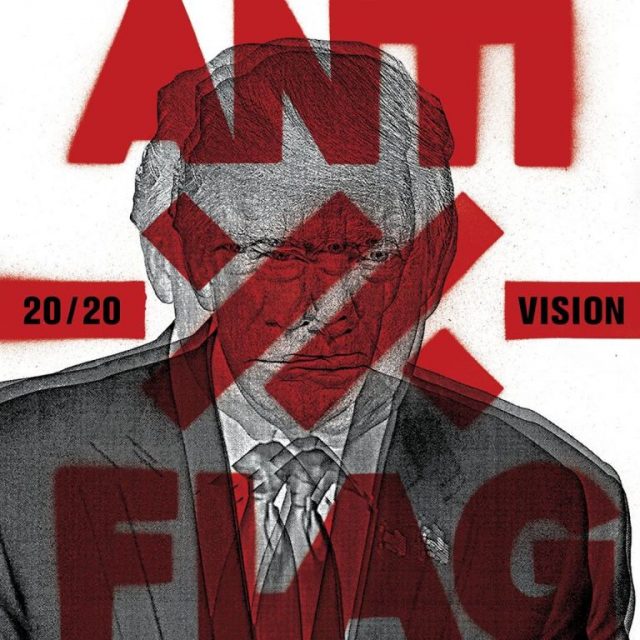 Anti-Flag have certainly had no shortage of material to inspire them in recent years. Given the current bleak state of the world, there is plenty for a politically charged punk band to sing about. Whilst there is no doubting they would much rather the world be a better place this has resulted in some of their best material, especially on 2017s American Fall. And this has continued on their 12th full length album 20/20 Vision.

Before you’ve even heard a single note of this album, one glance at the cover should be enough to tell you whether this album will be for you or not. It’s hardly surprising that this album is anti-Trump. Anti-Flag have never exactly been a subtle band but then they are a straight up rock band so subtlety isn’t exactly necessary. However this isn’t just an album of catchy political slogans, the message here is very real for Anti-Flag and they are a band that fight for change.

Album opener “Hate Conquers All” even begins with a clip from one of Trumps typically nasty speeches, if you needed a reminder of what an awful man he is before the band come in with one of their angriest tracks ever. Bassist and vocalist Chris#2 brings so much fury with his delivery on this song and the lyrics reflect this too. “Watch the empire fall, watch the nation dissolve” just sums up their current feelings about the state of America.

“It Went Off Like a Bomb” follows this with with a quick blast of hack and slash punk aggression. The title track brings a little more optimism and provides the albums first uplifting moment and is sure to become live favourite. This is then followed by one of the most in your face songs on the album, “Christian Nationalist” goes right in on the white nationalists that feel so emboldened right now. Again this will no doubt become a staple of their live set thanks to one of the albums many catchy choruses.

There’s a couple of moments where they mix things up on the album such as “A Nation Sleeps” which is just a 2 minute blast of hardcore. Or there’s “Un-American” which sees them channel a little bit of Springsteen on an acoustic ballad. It’s the closing track which is the real standout though. The use of trumpets gives it such an uplifting feel and it makes a nice counter to the anger that opens the album. Even if lyrically it is still very focused on a lot of what is going wrong in the world, it’s a rallying cry to resist against that and is a message many fans will be happy to embrace.

20/20 Vision is just Anti-Flag continuing to be a very good punk band. They are using their platform to try and spread a positive message and encourage people to not just give up no matter how bleak the world looks. Hopefully by the time the next album comes around things will be a little better, Anti-Flag no doubt eagerly await when they don’t have to write an album about Trump.