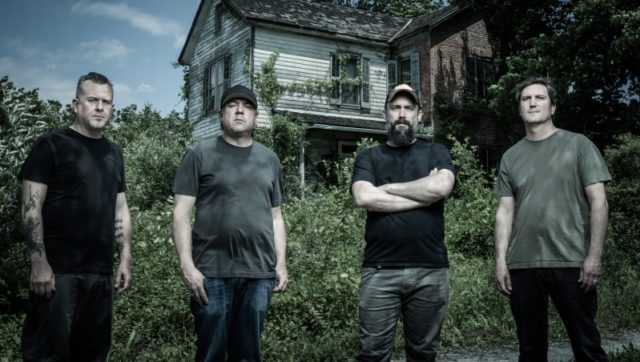 Clutch, like ZZ Top before them, seem to be a huge cult band who are long overdue to burst well and truly into the mainstream consciousness. Since forming in 1991, the Maryland four-piece have released a string of critically acclaimed albums and played on some of the biggest and best-known stages in the world. Their own brand of rough-edged bluesy stoner rock has won the hearts of a wide range of music fans as they mix solid rhythms, blue collar grit and a razor-sharp intelligence. Theirs is not a heads-down approach but one that moves mind, body and spirit. In their, now annual, Christmas visit to these shores they highlighted exactly why they remain so vital. For another prime reminder of this, check out our review of their performance at Download Festival 2019 earlier this year.

A fiery and frantic ‘Burning Beard’ kicked off the set, frontman Neil Fallon immediately commanding the stage, his demeanor that of a South Baptist preacher at a tent mission extolling all there to become instantly drawn into his thrall. Whilst guitarist Tim Sult is stock still, hunched over his guitar throughout the set as his ferocious playing breaks bones and masterful bass player Dan Maines is almost as static, it’s the magnetic presence at the front of the stage that becomes the real focal point of the night. There really aren’t any gimmicks with Clutch and, completed by the fluent, but never needlessly flashy, drumming of Jean-Paul Gaster, the band let their impressive musical canon speak for itself.

‘The Dragonfly’ swiftly follows, it’s fractured blues stomp carrying on the waves of sonically charging mayhem whilst, given the current state of politics in America, Fallon’s confidence and policies suggested in the rallying cry of ‘How to Shake Hands’ indicated that every single person crammed into the Camden venue would vote for ‘Clutch 2020’. Again, the fervor is sky high and anyway, who wouldn’t like to see the late, great comedian Bill Hicks on a $5.00 bill as the song suggests? ‘A Good Fire’ seethes with its cascading riff and ‘Mercury’ becomes an ultra-heavy whirlwind that prompts a sea of jumping bodies in front of the stage. The band can bring the funk too and the dirty groove of ‘Swollen Goat’ turns the moshing into dancing before they slip into mid 70’s blues rock with ‘A Quick Death in Texas’ and then up the ante again with a passionately received ‘Barbarella’ and the irresistible and wild ‘10001110101’.

Given that most recent release ‘Book of Bad Decisions’ is their twelfth studio album, there’s never a shortage of material to pick from and it gives the band the opportunity to breath creatively, playing exactly what they want to. There’s certainly light and shade in the set and the acoustically driven epic ‘Ghost’ is a real highlight of a set that never stops moving, eschewing any claims that they play to a strict structure and constantly repeat. This is beautifully illustrated by the juxtaposition, straight afterwards, of the 100mph blast of ‘Noble Savage’ and brings to mind just how suited Clutch were as a support to Motorhead on their UK tour in 2006.

The set concludes with ‘The Face’, Fallon conducting the audience like a master puppeteer, before they return to encore with a phenomenal ‘Electric Worry’ that sees every voice and fist in the place raised as one during the chorus. The night finishes with the bittersweet poignancy of ‘Fortunate Son’, the Creedence Clearwater Revival classic played in silent but joyously thankful tribute of recently departed and much-loved friend and manager, Jack Flanagan. The perfect way to pay respect to their mentor, it was the ideal end to a set that showed that Clutch may never hit the heady commercial heights of some of their peers, such as the aforementioned Texan trio, but they will never sell out, resolutely playing their music their way and compromise be damned. True originals and one of the finest bands you’ll ever see (10).

Clutch’s most recent album, Book Of Bad Decisions is out now. Pick up a copy from Amazon.