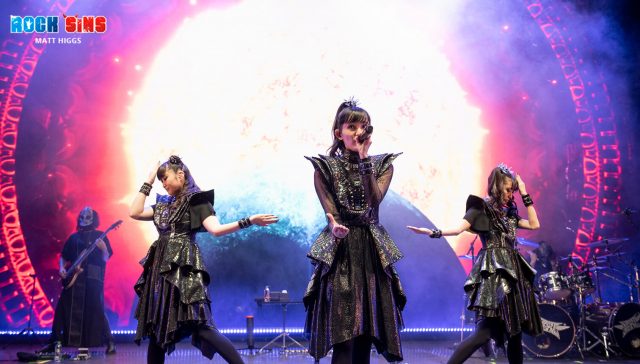 It has been an interesting past year for Babymetal. While continuing to tour relentlessly after the success of their sophomore effort Metal Resistance, the group was hit by the departure of Yui Mizuno in late 2018 due to undisclosed health reasons, and the core group reverted to a duo of Suzuka Nakamoto and Moa Kikuchi. However, this setback wasn’t to hold them back for long and in 2019 album number 3, Metal Galaxy, was released to critical acclaim and a more evolved and defined sound. Now in the middle of a world tour to support the album, the group descended on the hallowed Hammersmith Eventim Apollo along with horror punks Creeper for a night of sheer bedlam.

Opening the night, Creeper [8] had a loud and dedicated portion of the crowd supporting them as they powered through their set, with a sound moving between AFI, My Chemical Romance and The (International) Noise Conspiracy. They put on a great live show in a set dominated by their first album Eternity, In Your Arms rather than any rarer cuts from the early EPs, although they did show off a new track in “Annabelle”, which is set to appear on this year’s Sex, Death and the Infinite Void. Frontman Will Gould had tons of energy, bounding around the stage in all black while the rest of the band, in white suits, kept going like a well oiled machine, with particular praise going to the drumming of Dan Bratton. It is pretty clear from this showing why Creeper are seen as one of the rising stars of British rock right now. However, there were still some parts of the crowd, particularly in the more metal leaning sections, that didn’t quite warm to them. It’s to be expected, given the difference in style that Creeper offer compared to the night’s headline act, and although their performance may not convince everyone to go out and buy their music, their live show will certainly have won over some fans.

However, the act that everyone was here for was still to come. With all the lore and theatre that has become a trademark of their live shows, Babymetal [10] burst onto the stage with full force as they break into an opening salvo of “DA DA DANCE” and “Gimme Chocolate!”. With a huge screen behind them to help illustrate the lyrics, the visuals are a sight to behold, whether it be the bright lights, tightly choreographed dance moves, pyrotechnics or just the bizarre sight of thousands of CGI RoboCop-esque Joakim Brodéns (of Sabaton fame) Russian dancing to “Oh! Majinai”. It really feels like Babymetal have taken inspiration from Rammstein’s mantra of “if you can do it, overdo it” and it really adds an extra layer of entertainment to proceedings.

Performance wise, Nakamoto and Kikuchi are as on form as ever, accompanied by tonight’s Avenger, Momoko Okazaki, who feels as much a part of the band as the core duo. The Kamis of the West are also on point, with some impressive solos in the intro to “Kagerou” and all the energy to match the girls in front of them. Being a tour in support of the new album, the setlist is dominated by tracks from Metal Galaxy, although old favourites such as “Megitsune”, “KARATE”, “Road of Resitance” and “Headbangeeeeerrrrr!!!!!” are still in the mix. It is a slight disappointment that songs such as “Doki Doki ? Morning” and “The One” didn’t make the cut, but when acts get to their third album they do have to start making difficult set choices. Nevertheless, everyone involved with Babymetal knows exactly what to bring to every concert and I don’t think anyone can leave disappointed with what they got. The question now is, after they’ve finished conquering the Metal Galaxy, where will the Fox God take them next?

Creeper will release their new album Sex, Death and the Infinite Void on 22 May 2020. Follow the band on Facebook for more.