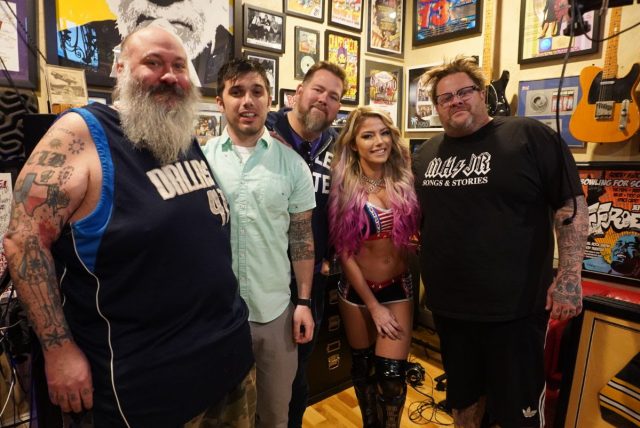 Here at Rock Sins it’s no secret we love the guys from Bowling For Soup. We’re also quite partial to some wrestling. So when the news dropped yesterday that the Texan pop punk favourites have penned a new track about and dedicated to none other than WWE’s former Women’s champion Alexa Bliss, it went straight to the top of our playlist!

Simply called Alexa Bliss, there are nods to various aspects of Alexa’s wrestling life throughout the lyrics. There’s also time for a couple of mentions of her pet pig Larry Steve! Little Miss Bliss also stars in the video for the track which is inspired by the 80’s movie Weird Science. Check out the video right here:

Having been immortalised in song by her longtime favourite band, here’s what Alexa Bliss had to say about the track:

“This song is amazing 🙂 filming the video was such a great time I had a blast. It’s definitely a once-in-a-lifetime opportunity when your favorite band in the world makes a song about you. And Jaret is always so fun to work with and be around :-)”

Meeting Alexa Bliss was insane! Here is the freakin’ WWE Womens champ, and she likes our band! I’ll admit, I checked her socials after we met the first time and saw that she had worn our shirt in a photo, and tweeted about listening to us in class while still in Ohio haha…

We became fast friends. She has been such a pleasure to get to know and has been so awesome to me and my family…why WOULDN’T I write a song about her?!? ”Five feet of amazing!!!

The artwork for the single, which features Alexa Bliss posing with Bowling For Soup frontman Jaret Reddick’s guitar, can be seen here:

Bowling For Soup return to the UK to begin their almost sold out tour with special guests Simple Plan and Not Ur Girlfrenz this Monday. Dates and venues are as follows:

Last tickets for London and Brighton can be obtained from Ticketmaster.