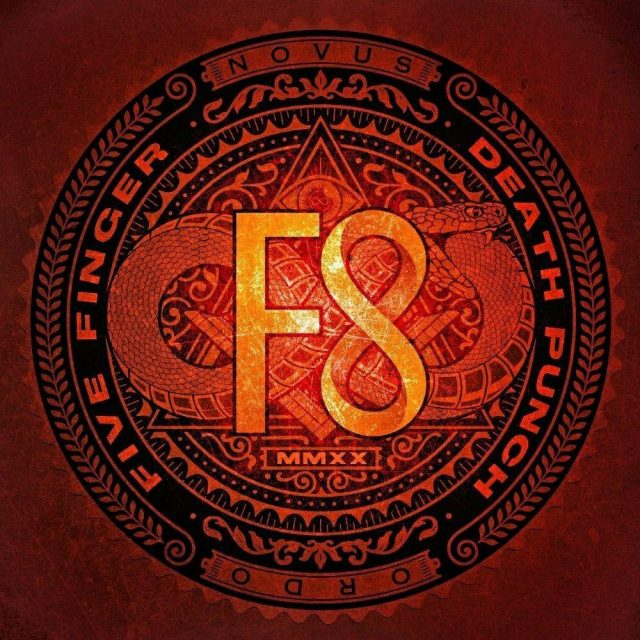 Overall Score: 9/10 riffs: 9/10 stand out tracks: 9/10 musicianship: 10/10 Pros: Massive tunes, stunning ballads, even bigger hooks and Zoltan Bathory sweeping like a janitor on This Is War Cons: Critics won’t like that it sticks to the usual 5FDP sound.

It seems the path we’re on was paved with blood and sorrow so sings Ivan Moody which seems to allude to the relentless and war-torn path that Five Finger Death Punch has embarked upon to reach its eighth album.

It’s almost surreal that they got here in a series of circumstances that came close to completely derailing the band from label woes, member changes to personal issues. The Death Punch have been through the wars but dare we say it F8 is all the richer and armed with the bands most relatable lyrics and varied musical content as a result.

Dubbed as their rebirth album, Five Finger Death Punch, has certainly thrown down the gauntlet with an all guns blazing approach in what just might go on to become their most decorated release yet.

For the first time ever, Death Punch has chosen to open with a string led instrumental piece, which is the albums title track. It is so stunningly bombastic that we’re quite sure bands like Nightwish, Epica and Dimmu Borgir are jealous. It seamlessly transitions into mega track Inside Out which is surely the crescendo to end all crescendos. The riffs deliver crushing blows and the solo is outstanding in all its string bending and arpeggio-laden glory. Zoltan certainly opened the sky on this one. The pre-chorus and chorus sections are massive. Having witnessed this one live with the intro on the UK Tour, it is carnage of epic proportions and will surely become the bands opening track on all tours from this point onwards. Stand aside Lift Me Up and Under & Over It.

Full Circle and Living The Dream round off what is surely the strongest trio of songs opening a 5FDP album since their debut albums Ashes, The Way of the First and Salvation combo. If Living The Dream doesn’t end up on a marvel movie soundtrack then something is very wrong in the world.

The opening to the album is so strong that fourth track A Little Bit Off, is well, a little bit off. It falls a little short of the marker purely because it follows such a killer opener and it’s one of the albums “Off-Piste” tracks that may have been better suited as a bonus track or as an album closer than lumped between the main action down in heavy city. But don’t mistake this for it being a bad track… it’s not. It’s different and interesting and completely unexpected but you almost wish they’d have stuck This Is War here instead to pack in a few more punches and broken noses before mellowing out.

Listeners needn’t worry as the album lunges back to heavy-hitting pace by the time the Hardcore-y Bottom Of The Top crops up. “Is this heavy enough for you”? muses Ivan Moody. Yes Ivan. It is. Somewhere amongst the chaos the track lets up into a pretty interlude section of clean vocals and proggy inspired blues licks that wouldn’t be out of place on a Periphery record to the point you’re almost willing Jason Hook to get his Djent on. He doesn’t and the song returns to the mad heavy chaos that opened the track which is nevertheless equally as thrilling.

It’s followed by To Be Alone which delivers what can only be described as Disturbed influenced – especially on the verses where Moody sounds more like David Draiman than David Draiman. Think in the same vein as Down With The Sickness or Stricken. Don’t worry though, there aren’t any numa numa numa riffs or cries of Owaaaa in the song and the chorus ensures it firmly has a Death Punch stamp on it and Jason Hook also delivers one of his best solos to date.

This Is War is a giant throwback to a heavier incarnation of 5FDP circa 2007. It ranks up there with the heaviest songs 5FDP has written since The Way of the Fist era. It’s a giant punch in the face and you will break you neck trying to head bang to it. The drums of new man Charlie Engen sound like artillery relentlessly firing for over three minutes but it’s the killer clean sweep picking of Zoltan Bathory and Jason Hook that cut through the noise. Where Death Punch pulled this one from, we don’t know but it’s nice to see them still proving they’ve got songs in this vein up their sleeves.

Album closer Brighter Side of Grey draws parallels to Linkin Park’s One More Light, with equally as heavy hitting and emotional lyrics – case in point with the opening lines “I’m writing this in case I’m gone tomorrow.” When it comes to ballads from albums gone by 5FDP have never put a foot wrong. Every single one they’ve written from Far From Home to Will The Sun Ever Rise and even bonus tracks like The Tragic Truth are uniquely touching in their own ways, but this one might just be the best one they’ve ever written. It’s sad. It’s comforting. But it’s also uplifting and inspiring. We can already picture arenas lit by torches and phones and crowds in floods of tears if they play this one live. Yes it really is that good. Lyrically, musically, everything. A classy and well composed finale to the bands most varied release to date.

We also have to shout out to the bonus tracks. Unlike other bands bonus tracks are always something that 5FDP seems to excel at and F8 doesn’t let up in this department either. The radio edit of Inside Out is equally as stunning as the main version. The only difference being that the verses have clean vocals which work just as well as the screams and honestly, we wouldn’t have been mad if this was the final cut version. Making Monsters gives off a cool Alice Cooper/Rob Zombie type vibe so we’re assuming that Jason Hook had a lot to do with it. But it’s Death Punch Therapy – which throws elements of pretty much every single 5FDP song from White Knuckles to Battle Born released into one song with The Devil’s Own remashed up for the chorus. It’s a track that frankly we didn’t know we needed.

If you liked 5FDP before this, you’ll love F8. If you hated 5FDP before this, you’ll still hate them. Existing fans will surely welcome the new twists and turns that add new dimensions to the much-loved Death Punch formula. You can already see here how these elements will undoubtedly open up ways for them to further dabble and play with their sound on subsequent releases. More strings please and thank you.

By the eighth album most bands have fizzled out but this might just be Five Finger Death Punch’s best release since American Capitalist (2011) catapulted them to the next level nine years ago. Only fate can decide where 5FDP goes from here… and it’s surely on the brighter side of grey.