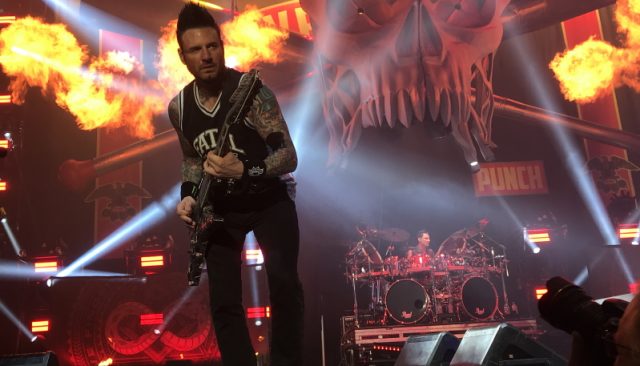 With just two UK dates announced on the Megadeathpunch Tour, fans made the trek from all corners of the country and beyond, to witness what will surely end up being one of the tour line-ups of the year. With Five Finger Death Punch and their special guests Megadeth and Bad Wolves on the line-up we headed to Wembley Arena to catch a glimpse of the carnage.

Kicking things off Bad Wolves [8] drew a huge crowd and appeared on stage like they were the main attraction setting the bar seriously high for Megadeth and 5FDP to follow. The crowd for them was HUGE. They brought with them a raft of big, full-on, arena-sized anthems from Remember When to Killing Me Slowly and Wembley was there for it. In between songs Tommy Vext’s delivery of heartfelt and uplifting messages (sharing song meanings and stories of overcoming adversity) surely resonated strongly with many of those in attendance and gained them many new fans.

They opened with No Messiah into Foe or Friend and it was clear from this that we’re witnessing a band going places and fast at that. For the first time ever, the band performed a stunning acoustic version of Sober with Doc Coyle accompanying Tommy Vext on stage. Not a single person in the audience didn’t have a lighter or torch on their phone in the air. It was simply beautiful.

But it wasn’t all airy-fairy radio rock ballads. They brought carnage in abundance including a big “Jump the f***” up moment for I’ll Be There where the entire arena got down on one knee.

By the end of the set, Vext was visibly overcome with emotion, as the bands iconic cover of Zombie scored a massive singalong and huge applause, seemingly in disbelief that he and his bandmates have played at Wembley Arena.  He reflected on how Wembley is the place where everything started for the band. There wasn’t a dry eye in the house. What a journey Bad Wolves have had to get to this point and based on this 2020 is going to propel them to even greater heights.

Megadeth [7] were up next. The band blasted their way through a diverse setlist which was equally as thrilling to the diehards but also to the countless individuals in attendance who may have been hearing the band live for the very first time. They delivered the thrashy guitar masterclass that they’re synonymous with. The kind they deliver flawlessly night after night to the point that it’s hard to find words that haven’t already been echoed in column inches over the last few decades about the band.

All of the hits were present and accounted for from the opening tones of Hangar 18 to Sweating Bullets to Symphony of Destruction to Peace Sells. Naturally, they saved the best to last blitzing their way through the many twists and turns of mega tune Holy Wars. The crowd was on cloud nine. Countless crowd surfers navigated their way over the barricades in droves whilst the frontlines were full of banging heads and serious windmilling throughout the entire show.

The highlight of the set, however, was Frontman Dave Mustaine speaking about his recent battle with throat cancer and watching him seem speechless and somewhat touched by the crowd’s chants of “Dave, Dave Dave!” as he confirmed he is now cancer-free. A triumphant UK return for one of Metal’s most iconic legacy bands.

There’s a song from way back in the War is the Answer era of Death Punch a decade ago. In it frontman Ivan Moody proclaims “I’ll slap you so hard it’ll feel like you kissed a freight train.” and that’s exactly what Five Finger Death Punch [10] delivered on their third headlining visit to the Wembley Arena.

The lights dimmed over Wembley with the 5FDP knuckleduster logo projected on the stage curtains and spinning. Fans were already screaming the band’s name long before spotlights beamed and Ivan Moody’s silhouette appeared and the curtain came down.  The band immediately brought out the big guns launching straight from Lift Me Up into Trouble and Wembley went off-the-charts mental.

It’s here we got our first glimpse of the stage setup and giant Knucklehead towering over the drum kit. On this occasion, it’s clear that the band had brought everything in their arsenal by way of stage production. Previously European and UK runs have been decent enough for stage production but not a patch on the US 5FDP tours with pyro saved only for the big occasions like Wembley. This time however they’ve brought this staging to every single date on the tour so far. There’s fire, ridiculous laser lighting and more. Whilst no one will ever top Rammstein in the fire department, at this point we’d go as far to say that only the likes of Ghost and Sabaton have a stage set up to rival that of Five Finger Death Punch.

Wash It All Away, which has become a staple in the Death Punch set since 2015’s Got Your Six release, was thrown in for good measure next and you bet Wembley went wild for it before the hellraiser anthem Jekyll & Hyde kicked in. Speaking of the setlist, it’s probably the most rounded its ever been, showcasing the IT tracks from across the bands back catalogue. Die-hards of the band will surely welcome new songs in the setlist on the remaining tour dates and the rejuvenated in-between song banter.

And Justice For None songs finally received their UK debuts on this run in the form of Sham Pain and Blue On Black. The former scored serious head bopping and mega-singalongs as dollar bills bearing the bands Knucklehead Mascot rained down on the audience. Guitar tunings went low, low, low for the emotionally charged Coming Down. Moody’s voice sounded more moving than ever but bandmate Jason Hook stole the show taking to the skies for the songs solo – because why shred on the ground when you can shred from the ceiling of Wembley Arena wielding the guitar equivalent of a lightsabre.

But it was the acoustic Wrong Side of Heaven and Battle Born combo late in the set provided several of the evenings big talking points. Jason Hook did an impromptu, brilliant acoustic rendition of Inside Out. “Hey Jason, what song is that you’re playing!?” said Moody, evidentially impressed by Hook’s flawless playing. “It’s Inside Out” (aka one of the bands recently released new songs) he replied, amused before launching back into it. “You’ve gotta give me a heads up” Moody retorts somewhat embarrassed that he hadn’t recognised his own song before styling it out with some of his best live vocals to date. Moody briefly exited the stage mid-Battle Born before returning hand-in-hand with a doll-like little girl who must have been about five years old throwing the metal horns and singing every word. Surely the most adorable mini-metalhead ever to grace the Wembley stage.

Things got heavier as the night went on in the form of Burn MF. “Let’s try something new”, Ivan Moody said, “Make a circle pit with your cell phones” and you bet every person in the arena hall wildly swished their phones in the air as the arena twinkled brightly. Take that Newport Helicopter. But this was only the beginning as Moody then roared for Knuckleheads to make way for “Hurricane Ivan” advising people to move from its path if they didn’t want to come on the wrong side of the carnage down in the circle pit. When we say we haven’t seen a Death Punch pit go off quite like that that since the Hammerfest II Wall of Death to White Knuckles we really mean it.

New man Charlie Engen (of the Prog Metal bands Scale The Summit and Ideology) deserves mad props, not only for his work behind the kit but also his ability to seamlessly slot into a band of this size without a hitch. In fact, it’s like he’s been with the band for years. His playing was energetic, dynamic and technically outstanding. His chance to really shine and show-off came in a classy drum solo which packed a megadeath punch and then some ahead of the band’s encore piece. Where Death Punch found a drummer of this calibre we don’t know, but if this is anything to go by his contributions on upcoming album F8 will be something special.

But Five Finger Death Punch wasn’t done there. Darkness descended once more on the arena and the bombastic sounds of cellos, violins and the rest soared through the airwaves. Then came those heavy as hell riffs as the band unleashed new track Inside Out. New it may be, but you bet the crowd knew every single word, every guitar and bassline and every drumbeat. It was outstanding.

Trademark closer The Bleeding wrapped things up to the usual sea of lighters, screams and waving hands. Jason Hook wheeled out the seven-string for one-last blast of string bending mayhem and Zoltan Bathory swirled his dreads like his life depended on it in what surely must be up there amongst the performances of their career.

Ivan Moody briefly mentioned that the next time Five Finger Death Punch comes to the UK they want to be headlining Download Festival. And you know what, they’re probably going to make it. Second chances don’t come often and you just know that Death Punch has got this in the bag.

This is the best they’ve ever been.

Inside Out
Under and Over It
The Bleeding 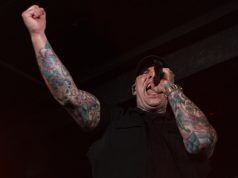