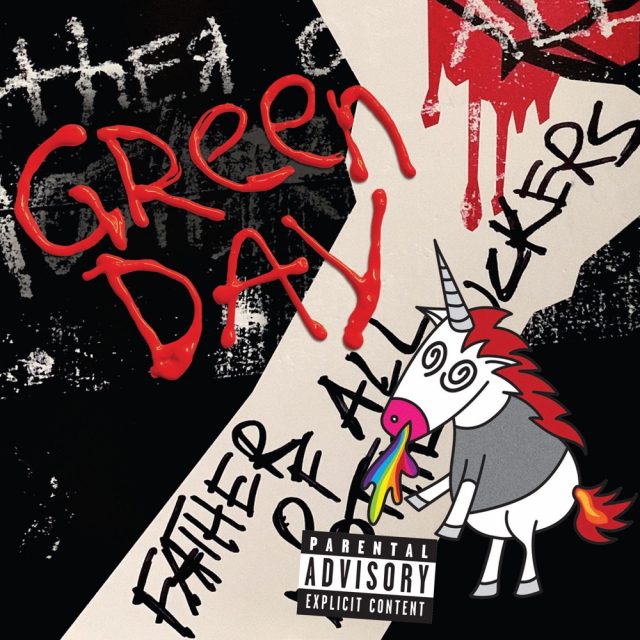 It was with some trepidation, therefore, that I began to listen to their new (not very) long player –Father of All Mother Fuckers, as personally I’ve found them to be going off a bit since the frankly incredible American Idiot and most of us had already heard a couple of the tracks…

This album is in no way a return to form, its roots very much in more modern alt-rock rather than any form of punk rock, but rather irritatingly it’s bloody catchy.

Billie Joe Armstrong has always had pretty good songwriting chops and as he’s got older he’s certainly allowed himself to be influenced by other sounds and never been afraid to experiment, so you got to give the man credit for wanting to flex himself a little bit here and there, but perhaps he should have formed a side project for this particular album, as it doesn’t really feel like a Green Day album. Sure, their sound has certainly changed a bit in the last decade and it would be unfair to expect the band to release Dookie MkII nearly 30 years later, but FOAMF seems a bit detached.

As I said previously though the sumbitch is sure catchy and Billie Joe appears to have decided to dispense with singles in favour of earworms – Oh Yeah being a perfect example, as I hated it upon seeing it on YouTube, then spent a considerable amount of time singing it around my house…

Meet Me on The Roof wouldn’t be out of place on an album by The Kooks and I Was a Teenage Teenager could have been by The Killers.

Stab You in the Heart has a little more of the punk rock vibe before going into the surfer rock the boys have dabbled with a couple of times in the past and I could see that working really well as a first encore on the upcoming HellaMegaTour with Fall Out Boy and Weezer, which is really going to be the test for these tracks.

That said there is no big arena/stadium single – previous albums had 21 Guns, Bang Bang… even Uno had a couple of singles on it, yet nothing on here jumps out, in fact the previously released tracks are probably the weaker ones on the album.

As previously reported everywhere FOAMF has run time of less than half an hour and that is probably its biggest strength, with just enough songwriting to keep the listener going and ending before boredom can set in.

I would be interested to know what Mike Dirnt (bass) and Tre Cool (drums) think of this album – is it just Billie Joe getting something out of his system? Are they just along for the paycheck now? I’m sure there is nothing so nefarious, but one can’t help wonder whether 3 people really did change their musical direction so radically yet so collectively.

Generally speaking, it’s not a great album and it seems unlikely to be “a marmite album” either, instead it seems more probable the majority will dislike to varying degrees and a few will think it’s “ok”, but as previously stated, playing the tracks at the upcoming live shows will tell all and you can decide for yourselves in June, so grab your tickets now and just be prepared to be a tad underwhelmed.