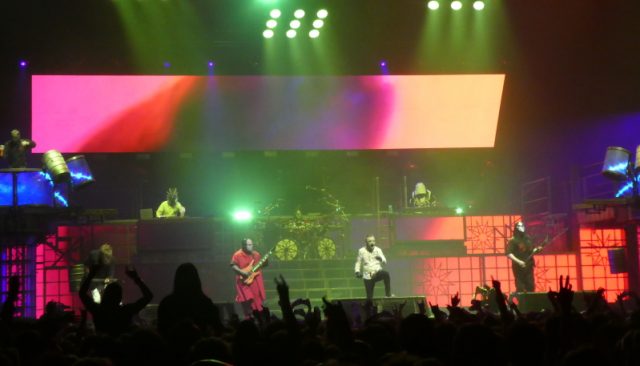 Slipknot headlining The O2 Arena has always felt like a question of when, not if. Having conquered Wembley Arena five years ago, and then playing two nights at Alexandra Palace the year after, the beginning of 2020 finally saw the Iowan masked juggernaut roll into North Greenwich to take over London’s biggest arena.

Before Slipknot, there was the none too insignificant event of (to this reviewer’s knowledge) Behemoth (7) becoming the first black metal band to ever play The O2. Never a band to be too far from controversy by their very nature, their booking as tonight’s only support band was questioned by some after certain social media posts. That hasn’t affected their appeal to the masses, with the crowd inside The O2 already sizeable and rapidly swelling with each song.

Given that they were the only support band, Behemoth brought a sizeable amount of production with them, with CO2 cannons and pyro accompanying the likes of the thunderous Ora Pro Nobis Lucifer and Conquer All. While it seemed that some in the audience weren’t quite sure what to make of Nergal, Orion and co (quite possibly the first time some in attendance had ever seen a black metal band), the majority were very loud in their applause, particularly after Ov Fire And The Void reverberated around the cavernous O2. Finishing the main part of the set with Chant For Eschkaton 2000, Behemoth departed to roars of approval, only to return all equipped with drums for a slightly off kilter finish to the performance which in all honesty felt a bit out of place. But this was a small issue with an overall very enjoyable performance.

Those who experienced Slipknot’s incredible performance at Download will know what a vein of form they have been in live in recent months. Here they were still very impressive, but it was a different kind of performance. Whereas the Download show was an almost non stop sprint, this was a more measured Slipknot (9), but bringing just as much ferocity as one would expect from the nine masked men.

Given both the popularity of We Are Not Your Kind and it’s lead single, starting with Unsainted seemed a no brainer. The pit exploded into life instantly, while the singalong that greeted the chorus shows that Unsainted has already entered the list of “undroppable” songs with the likes of Duality and Psychosocial. Following it up with Disasterpiece and then dropping the night’s first deep cut in Eeyore meant the chaos continued both on stage and on the floor with new circle pits forming all over The O2 every minute.

The stage setup for tonight’s show, while not as menacing as the Prepare For Hell tour, is by far the most advanced Slipknot have ever had. This was fully demonstrated during another of We Are Not Your Kind’s best tracks Nero Forte; the giant, split video wall revealing itself properly for the first time, while Clown and Tortilla Man’s drum risers have had a serious upgrade to be covered all round with video screens.

As with their new album We Are Not Your Kind, the show was punctuated by several interludes, ostensibly 1) to help build the mood and 2) to give the members of the Knot a breather every so often. Some in attendance felt this hurt the momentum of the show a little, but everything Slipknot do, they do for a reason, and while it may not be what one is used to in a Slipknot show, it worked well enough.

The next hour passes by as if it were mere minutes. There are the favourites (Before I Forget, Psychosocial), the rarities (New Aborted) and more selections from We Are Not Your Kind with Spiders sounding particularly dark and sinister live. Making reference to the fact that it hadn’t made the Download setlist, Wait and Bleed was greeted with a gigantic reaction. Gigantic would also be an accurate word to describe the circle bits that broke out all over the O2 when they followed it up with Eyeless. V man also got a temporary upgrade to his bass – namely a flamethrower!

While feeling a tad rehearsed, Corey’s speech prior to the phenomenal All Out Life hit all the right emotional notes, more uniting than any current politician could ever be. From there, a thunderous Duality nearly took the roof off the old Millennium Dome, concluding the main set.

They weren’t gone for long, 742617000027 creeping its way over the PA system before the relentless assault resumed with the one-two punch of (sic) and People = Shit. Finishing off with the now traditional Surfacing, Slipknot conquered The O2 Arena as they have conquered every other London venue before it, going all the way back to The Astoria in 1999.

Metallica and Maiden will always likely be bigger, and Rammstein have a more elaborate stage show, but there isn’t a metal band in 2020 who the world needs as much as Slipknot. “We’ll give you another twenty years. I don’t know what it’d look like by then, but we’ll give you another twenty years” was Corey’s promise from on stage. While we can’t quite imagine a Slipknot in their mid 60’s at this point, We Are Not Your Kind and the associated festival performances and shows have shown that on current evidence, there is an enormous amount of life left in them yet. Bring on Knotfest in the Summer!