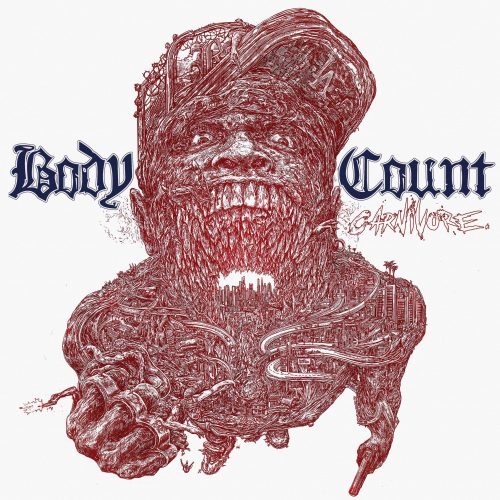 Ice – T has experienced a lot of things in his life. At 62, it’s safe to say the man is a living legend, who has seen & done more things in his life than most people could ever comprehend. It’s these experiences that have informed his career, both as a successful rapper and as the frontman of thrash metal band Body Count, who incidentally are celebrating their 30th anniversary as a band.

Carnivore, their 7th album and the follow up to 2017’s Bloodlust follows the same path that the band has blazed for the last 3 decades. By combining big riffs with a politically charged, streetwise narrative that looks to take no prisoners in the process. The one major difference between Carnivore and it’s predecessor is that this is an overall leaner and somewhat meaner affair.

There is zero fat on this album, and every track hits like a bullet between the eyes. Point the Finger featuring Riley Gale of Power Trip is one of the nastiest, thrashiest songs the band has ever written. Detailing the grim life of street culture, Gale and Ice bounce off of each perfectly, giving the track maximum impact.

First single Bum Rush is a massive anthem, and takes aim at the current political climate in America. It’s a rallying cry for the people to stand up and take their lives and their country back. It’s also got a massive groove in it, that will get lodged in your head and not shift for days.

There are two covers that settle into the middle of the album, one is a cover of Ace of Spades, but Motorhead, which is a fun affair, that is a very respectful homage to one of the greats done in the Body Count style. The second is an updated version of one of Ice’s solo tracks Colors, which sounds a lot heavier with some top notch production and a huge riff behind it, and frighteningly enough it’s as vital and relevant sounding today as it was back then.

The back end of the album features one of the most surprising features of the year. The track When I’m Gone features Amy Lee on guest vocals and is dedicated to fallen rapper Nipsey Hussle who died tragically while the album was being recorded. It’a the closest Body Count have ever come to writing a ballad. The themes of loss and appreciating the life and the people you have while they here is deeply emotional and really cuts through the core of the song. Amy Lee’s vocals are haunting and add a spine tingling extra layer to an already powerful song, showing that she was the right choice for the feature here. It’s a stand out moment and for me the album’a best track. It’s poignant, but also shows a totally different side to Body Count as well.

The album’s remaining tracks show Ice in fine form hitting back at critics and systemic racism. Thee Critical Beatdown is a fun track that looks to raise a middle finget to the haters and the critics that hide behind protection, but don’t want accountability for their actions. The Hate is Real is far more raw in it’s intention and again is looking to raise a mirror to racism in the world, something that both Ice and Body Count have been very vocal about over the years and as far as album closer’s go it hits the mark and sends the album out on a thoughtful note, acting almost as a companion piece to Black Hoodie which closed out the Bloodlust album.

30 years and 7 albums in, time has done nothing to dull the edge of Body Count, their music and their messages. If anything time has only made them angrier and more pissed off. In these deeply troubled times, Body Count are a band that needs to exist, and now is perhaps the most important time for their voice to be heard. Carnivore is a great metal album full of great songs, but it’s the message inside those that rings home the loudest.

The new Body Count album, Carnivore, is released on the 6th of March on Century Media Records. Pick up the album in various formats and bundles right now.