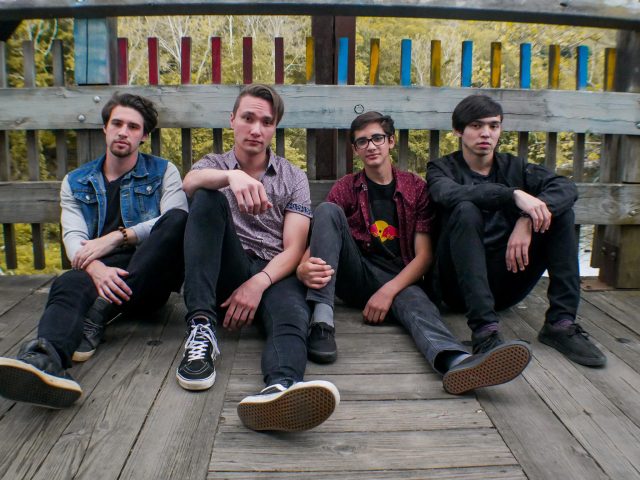 What’s the story behind Little Us, how did you come to be the modern rockers you are?

Our journey began back in 2013 when we formed an all original 80’s rock inspired band. As a freshman in high school, Rithya taught Alex how to play guitar over many late nights, using video chat and Alex’s rusty stringed children’s acoustic guitar. Ethan joined the band soon after taking on his role as keyboardist. Our band would go on to open for big cover groups like The Southern Comfort Band and Hollywood Nights Band in front of thousands of people. As senior year passed by, the band split up to go their own ways for college. But after about a year in hiatus, Rithya, Ethan and Alex began the new styled version of the band you hear today. Last summer in 2019, the band welcomed Kallen into the fold.

Who influenced and inspired you growing up?

Little Us has had many influences since its origin in 2013. Some of our old time favorite influences include, Def Leppard, Journey, Reo Speedwagon, Queen, Styx, Boston, White Snake, and many others.

What about now? What bands/artists are top of your playlists?

Some modern day influences of ours are Hands Like Houses, Coldrain, Picturesque, I See Stars, State Champs, Nothing More, Sylar, Pierce the Veil, Bring Me The Horizon, and Sleeping with Sirens to name a few. We even take influences from non rock musicians like The Midnight.

You’ve supported the likes of Slaves and The Red Jumpsuit Apparatus if you could tour or share the stage with anyone who would it be and why?

Our number one choice always has and always will be Def Leppard. We’ve looked up to them ever since this band started and they have been our heroes ever since. Combined, we’ve seen them live over a dozen times.

We see you also supported Issues last December, how was that?

We had so much fun performing with Issues at Toad’s place! The whole lineup for the show was insane because both Issues and Polyphia are two of our absolute favorite modern bands. Funny enough, during the summer before, we had to make three cross country drives which were filled with mostly Issues and Polyphia music. At that time, we had no idea we would get the opportunity to be a part of a show with both of them. Performing with all those bands and meeting so many great new people that night was an experience we won’t forget.

You recently put out your second EP, Don’t Let Go of Something Real, You’ll Be Fine can you give us the lowdown on the EP and each of the three tracks?

Don’t Let Go of Something Real, You’ll Be Fine is an EP we wrote which centres around the very sensitive topics of depression, anxiety, and a loss to a suicide. The reason we chose to compose this album was because we felt that it’s a subject almost all of us have faced, but many hesitate to open up about.

Don’t Let Go is a song we wrote to express a situation no one can ever be prepared for; the loss of a friend to suicide. The song carries a sad tone while retaining an upbeat feel which translates the shock and disbelief we faced with after hearing the news. Our purpose of the song was to encourage people to lend a helping hand to those who need it. We wanted to emphasize that everyone matters and there will be a brighter day.

Something Real allows people to sympathise with the feeling of never being good enough for anything or anyone. At the start, we remind you of simple times where we were nothing but an innocent minded child. The soundscape then morphs into a self loathing vibe which later spirals into anger and frustration until finally finding solace after the storm has ended. Our song tells the familiar story of a pure person being corrupted by judgement which may ultimately lead to the downfall of all their hope.

You’ll Be Fine deals with the seemingly endless battle of anxiety. The music takes the listener through this hectic state, but then drops them in a temporary steady ambience. The rollercoaster of emotions forces you to experience the ongoing cycle which is then transitioned into the song’s final triumphant ending. It depicts the constant fight to suppress an uneasy headspace which will only live to victimize another day. We wanted to tell our listeners: “it will get better” and that one day “You’ll Be Fine”.

The world is in a pretty tough place at the moment so more than ever people might be experiencing anxiety, how do you guys cope, what advice can you give?

We live by the mindset that every day should be lived in the present. If we’re stuck in a tough headspace, we allow ourselves to step back, take a breather and reevaluate. This lets us be conscious of the situation and helps us conquer it with a fresh mind. We also find that trusting close friends and family isn’t always easy but helps take some of the load off. This reminds us that we don’t have to go through tough times alone and we think everyone should know that.

What songs are the perfect pick up you all?

Every song on the album Peach Club by Emarosa for sure… or Africa by Toto.

Have you guys got anything else planned for rest of the year?

Right now during this quarantine, we have isolated ourselves in our studio, in order to write some more material and prepare for our next release. Although this seems productive, we do tend to get distracted and shoot each other with Nerf guns.

When all of the Coronavirus chaos is over, how do you think we should celebrate?

During this outbreak, a lot of local businesses, bands and venues are struggling. We strongly believe the priority is to go to Taco Bell and get a Chalupa Cravings Box. Just kidding. We should all work together by building each other up and giving back to the community. A cool idea would be to hold festivals in each state to celebrate togetherness because we’ve all been isolated for so long.

Listen to more from Little Us: