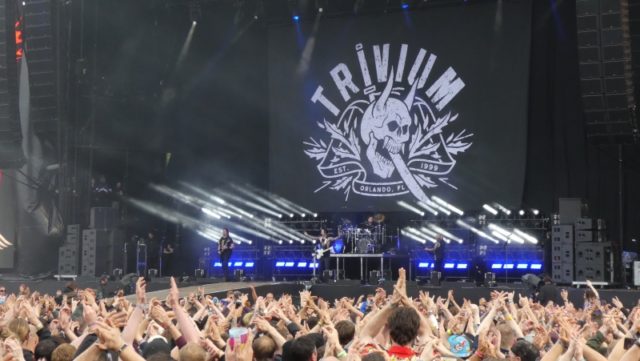 Ahead of the release of their brand new album What The Dead Men Say, Florida metal favourites Trivium have just dropped the video for the title track for the album.

Following on from the first single from the album, Catastrophist (which you can read more about here), What The Dead Men Say continues to find Trivium continuing their excellent form from previous album The Sin And The Sentence. The elaborate and very creative video for the track can be found below:

The video for What The Dead Men Say was created fully in the UK prior to the full Coronavirus lockdown coming into effect, with director Ryan Macfall and his team working in masks and gloves throughout the video’s creation and observing social distancing.

On the track itself, Trivium bassist Paolo Gregoletto explains how the song came together and while it was chosen to be the title track for the album:

We always take seriously which song becomes the title track because it represents the album’s musical themes and ambition. ‘What The Dead Men Say’ started off as two separate demos but emerged from the writing session as one epic tune. This is a riff beast!

The album artwork for What The Dead Men Say can be seen below:

Pre-order What The Dead Men Say in a variety of digital and physical formats from a selection of various outlets.

Trivium’s new album, What The Dead Men Say, will be released on Roadrunner Records on April 24th 2020. Stay tuned to Rock Sins for a huge interview with Trivium frontman Matt Heafy in the coming weeks!