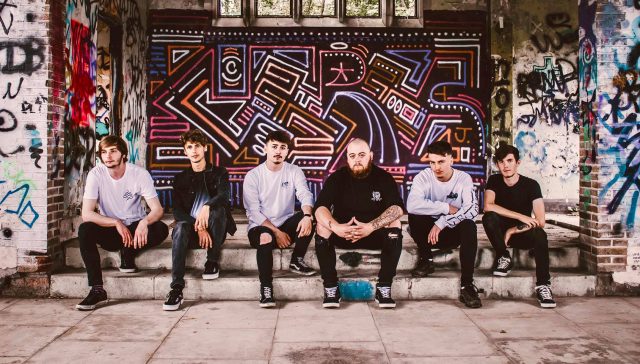 We caught up with the members of Sydney Fate to talk tours, Silicon Nitride and the re-emergence of the South Wales scene.

Hi Sydney Fate, how are you keeping in these strange times?

Thomas Atkinson-Turner (Bassist): We’re not too bad at all, thank you for asking! Me and the guys at Sydney Fate are all extremely lucky with our health, and we’re all doing our best to keep each other safe in these unprecedented times. That being said we all definitely miss getting together, playing shows everyday and having a laugh at the bars!

Personally, the changes that have occurred due to Covid-19 haven’t changed my routine too much. I’m currently working in the hospital as a key worker five days a week, but in my free time on weekend I’m still keeping myself busy by practicing some killer bass riffs, keeping up with my language studies and generally keeping healthy through exercise. I believe the key is to keep active, driven and motivated!

2019 was a big whirlwind of a year for the band what with signing with Eclipse Records. As a band, how do you perceive last year – the highs and the lows?

Bailey Edwards (Vocals): 2019 was actually a really fun year for us as a band! We hit the studio again to record the new tracks for our debut Silicon Nitride, played some incredible shows, signed to an awesome label and met some truly amazing people!

I think a personal highlight of mine would definitely be our ‘Pre album launch show’ in our hometown, Caerphilly! We grew up there as kids, and to have the crowd radiate such raw energy is always an absolute blessing.

Although 2019 was such a great year as a whole, it wasn’t all ups for us – unfortunately it was also the year we had to say goodbye to our bassist at the time; Scott Butterworth.

Scott left the band just before we set off to record the album which resulted in me having to record the bass, and it was a shame for all of us to see him leave! But it wasn’t a complete shock, Scott fancied a change in genre and was about to start his own adventure with marrage and a baby on the way, and we couldn’t be happier for him! Luckily for us our original bass player Thomas Atkinson-Turner had just finished university and had moved back home to jump straight back into the band, things couldn’t be better for us right now and I’m grateful that we all stay in contact!

You recorded Silicon Nitride with the help of Sam and Joe Graves at InnerSound Audio. What was that experience like for you?

Owen Whittaker (Guitarist): Recording with Joe and Sam Graves (Asking Alexandria, Eyes Set to Kill, In Visions) at InnerSound was such a killer experience for us! They’re two of the best producers in the industry, and to spend two weeks with them was an absolute pleasure.

We had a great time recording with them and learning more about their expertise. They made us feel super welcome from day one which we cant thank them for enough! I really enjoyed spending the time away with the band too, because although we were there for business, we had such a laugh and it felt like a little holiday.

We all stayed together in studio accommodation and everyday had us in tears from laughing so much! Each day we would all prank each other in the most ridiculous way possible and practically lived on Pot Noodles, microwave pizza and beer!

It was a fun route, wake up at around 8am and hit the studio right away, we would then be in there until around 7-8pm recording! We would then get back to our accommodation and hang out, watch South Park, play Call of Duty and just bond like any other family.

We made it tradition, as we had been here before, that on the last night we would hit the town and celebrate – So we set out for York town and headed straight for the bars! We even got to watch Joe and Sam play in a function band one time, we were loving life! Anyways a few hours later, and a lot more to drink, myself and Bailey had to go on a hunt to find Adam after he had been missing for over forty minutes, we found him half asleep in the gents toilets, he didn’t last very long!
To sum it all up, we had a great time, and we can’t wait to get back out there and do it all again!

Watch the video for TACENDA below:

What were the biggest production differences between putting out Silicon Nitride with Eclipse and independently releasing 2018’s Sound Alive EP?

Terry Collins (Drums): While we put a lot of our effort and hard work into the Sound Alive EP, we knew we wanted to still up our game for the album. The second time we hit the studio we had this unbreakable drive to get the best takes for every part! We would all push each other to our limits until we got the sound we needed.

When we went to record the EP, we were a group of friends doing what we loved, having a good time and we gave gave it our best while still keeping it a little raw.

When it came to the album it was a little different, we had a goal, we were motivated and determined to give it all we had and we even had the previous tracks remastered too! We had a great time and we can’t thank the Graves brothers enough, we’re looking forward to the next album! We’re trying to take our music to the next level, and already have some crazy compositions that we really can’t wait to share with everyone!

Silicon Nitride was released on 3rd April. What has been the reception so far?

Adam Rapado (Screams): Our social medias have been non-stop! Our music is getting exposed and people are listening, and enjoying it.
I’ve always said as long as we’re happy with a song, we can handle any form of negativity.

And that still stands, but all we’ve had so far is positivity and that genuinely makes me us so happy! That feeling you get, when someone has gone out of their way to message you to tell you what your music has done for them, there’s not a lot that can make you feel much better than that!

Which tracks on the record do you enjoy playing the most?

Dominic Evans – (Guitarist):
When it comes to narrowing down my favourite song from the album, it’s actually pretty difficult as they all hold a special place in my heart. If I had to pick one, I would probably have to say Falling Forward! The fast paced track really gets the heart racing right from the very beginning.

Playing this live always has an amazing response with our audience too. We like to kick off our shows with one of the favourites, Sound Alive, and then once everyone is warmed up we jump straight into Falling Forward! For me it just has a kind of ‘punch in the face’ vibe to it as soon as the first chord is played.

Hidden meanings and a really catchy chorus is what gives this song its power in my eyes, unfortunately i wasn’t actually in the band when this song was written, so all credit goes to my main man Bailey Edwards for composing such sick tunes for me to jump on and add my my own flair too on stage. With all this being said Falling Forward is my song crush.

Sound Alive is a positive track (and needed right now!), but it was written about a very personal break up. How does it feel to relive that song and those feelings each time you play it?

Bailey: For me, Sound Alive will always be a song that promotes growth, I feel it’s pretty important to identify that it’s our mistakes in life that mold us into better people, and performing that song has always been great way to remind myself of that.

I first wrote Sound Alive as a way to express how I was feeling at the time and to help overcome those feelings of loss and regret, I think to take something so personal and make it universally accessible for people to understand really helps paint a picture for the listener, and allows people to embed themselves into a situation that may have made them feel a similar way at one point.

The message of the song is simple, people aren’t alone and things will get better, it just takes time and active effort! So to be able to stand on stage and promote that message to our audience makes any experience worth it in my eyes.

Watch the video for Sound Alive below:

Back in the day, there was a huge South Wales music scene, which has ebbed away in recent years. Is Sydney Fate going to be the band to lead that re-emergence?

Adam: It’s a shame to see the South Wales much loved music scene has taken a slight hit, but we can promise you it’s far from over! We’ve played some really energetic shows with a lot of great bands and committed audiences over the past year, and they’re only getting bigger and better! There’s an abundance of talent around at the moment, and hopefully we can all come together and create some really special nights when venues start to open again. You only need one voice to be heard, so let’s shout!

Listen to more from Sydney Fate: