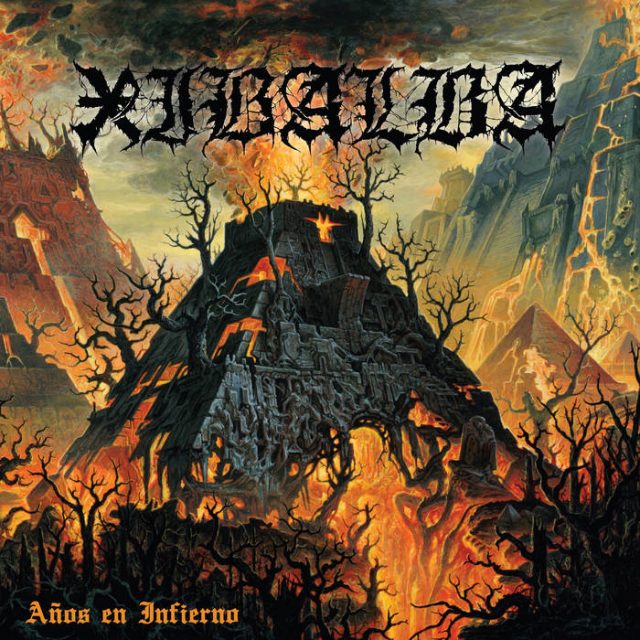 It’s been five long years since the last Xibalba LP. In that time we have seen the band go from strength to strength, releasing the frankly excellent EP, Diablo, Con Amor… Adios and appearing on touring packages befitting of their stature. What more the band can do to be celebrated by the underground is an unknown metric as Xibalba should be a household name in every dive bar and anarcho-squat. Here’s hoping that latest LP, Años En Infierno does something to elevate the act to the pedestal they ought to be on.

The band are admirably, difficult to pigeonhole. For an ostensibly hardcore band with deathcore leanings, a song like opener LA INJUSTICIA surprisingly sees a latter half heavily influenced by crossover thrash with Slayerisms in the squalling fed-back guitars. From the off it’s clear that Xibalba are operating with multiple influences in mind and they are happy to wear them on their sleeves. On SANTA MUERTE and the title track the heavy doom style riffing present in their earlier works rears its lumbering head to great effect. It presents a reprieve from the bludgeoning passages that have preceded it but is no less skull-splittingly heavy – if anything it finds the band at their most sonically weighty on the record. So far, so good, but it’s in the penultimate track that a stark comparison to Gojira of all bands can be made: EL ABISMO I, after its heavy introduction, sounds to all intents and purposes like an extended Gojira interlude ala Unicorn off From Mars To Sirius. It’s not so close as to be a straight rip-off, but the skeleton of the track is laced with Gojira’s DNA. The finale, EL ABSIMO II, is a titanic slab of crushing, bestial heaviness that leaves you battered and bruised and, most importantly, wanting more.

The record’s production is aptly heavy on the gain and distorted to within an inch of its life bar the percussion and vocals, sometimes meaning the intricacy of the death influenced riffing is lost in a coalescence of fuzz. The album is hardly a great inspirational work, lacking any sort of real progression within the genre. It is Xibalba doing what they do very well. They do dip their toes into some murky and untravelled waters, but never for long enough to abandon their intrinsic sound. But not every album has to push boundaries and march on to bold new frontiers. Sometimes something serviceable is just what you need, and sometimes a band playing to their strengths is more rewarding than anything admirable they may try, successfully or otherwise. This is deathened hardcore done well and will satisfy their fanbase. How far it will push them to the success of being the name they deserve to be remains to be seen, but on Años En Infierno, the band successfully toe the line between experimentation and stagnation to make this an interesting and fulfilling listen.

Años En Infierno is out May 29th via Southern Lord