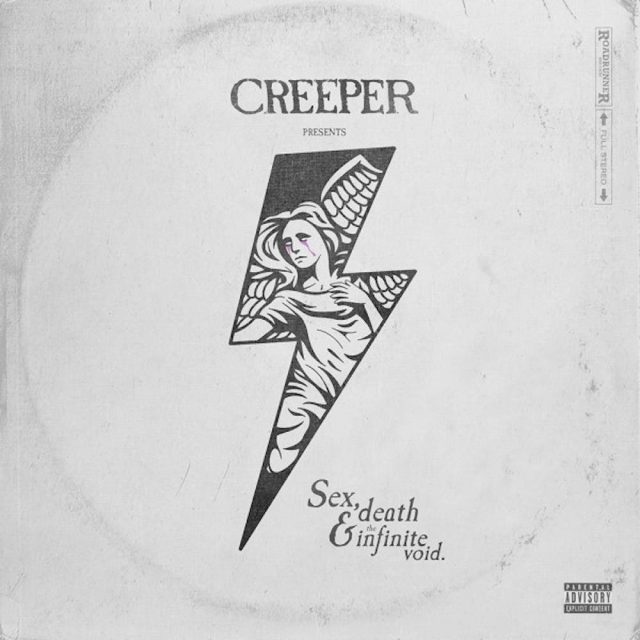 When it comes to theatricality in music there are those that get it and those that don’t. Creeper fall very much into the former category, this is a band with their own mythology, established canon and who are well versed in creating mystery around their work rather than just making music and putting it out in the world for the sake of it. There is a certain level of care and creativity that goes into everything they do that is somewhat unparalleled in today’s realm of fast food music consumption.

But it could also be said that Creeper are their own worst enemy; Setting the bar impossibly high for themselves with the release and subsequent narrative around their debut album Eternity, In Your Arms. It was always going to be a tough act to follow, especially when you consider they effectively killed off that era and went into hiding for a year. The Creeper Cult however was ready for it’s next fix, they wanted to know what was next. Well, the answer is Sex, Death & The Infinite Void, their sophomore album and one of 2020’s finest releases. I have to say this going in, anyone expecting Eternity Pt 2 should probably turn back now. This is a completely different album playing by a completely different set of rules and honestly the fact that it is so different is it’s biggest strength.

The band wisely front loaded the album with material that has served as pre-release teasers or singles which I think really helps to adjust the listeners’ ear to this new era of Creeper, it also makes sense from a narrative standpoint. Hearing these songs in the order they were intended really enriches the experience and hooks you in to this albums’ journey from the get go. Be My End, Born Cold and Annabelle all demonstrate not only how different this album is going to be, but also just how creatively rich Creeper are as a band, and it’s a theme that continues throughout the album.

Sex, Death & The Infinite Void is a much more layered and overblown record than their debut and really highlights a lot of the bands’ lesser known or discussed influences. When the world had them pegged as the next My Chemical Romance or AFI, they bring you an album full of brit pop, new romantic and even Gothic country leanings to show that they are so much more than many people’s base interpretation of them.

From a story perspective this album works best when listened to top to bottom. The listener will really find themselves fully immersed in the tale of Annabelle and Roe. This is a road trip album about doomed lovers and the things left in their wake. The best way to sum it up is that it feels like Natural Born Killers by way of Jim Steinman. The Latter half of the album is where the story really falls into place and comes into its own. A lot of the best material is also in the albums second, darker half. Songs like Thorns of Love Poisoned Heart and the emotionally devastating Four Years Ago give off some Nick Cave murder balladry vibes, and are some of the best songs that Creeper have ever penned. Napalm Girls is Creeper at their most anthemic, dripping in atmosphere and oozing attitude, complete with a chorus to die for, it’s sure to be a live favourite whenever Creeper are able to take this album out on the road.

The story and characters will make for a stunning stage production one day and hopefully that can be realised with an elaborate tour in the near future.This albums characters, story and aesthetic stand on their own, and more than hold their own, there is the imaginative part of me that wonders if this could be a clandestine psuedo sequel to Eternity In Your Arms, if you view the arc, the same way you view the film The Fountain. That simply if two souls are meant to be then they will be, and that Annabelle and Roe are simply James Scythe and his wife from that first album in new hosts, living their romance out again, but maybe that is another conversation for another time.

Sex, Death & The infinite Void is a stunning piece of work from a band that still feels like they are still only scratching the surface of what they are capable of as a band. It also proves that just when you think you have all of the answers, Creeper go ahead and change the questions. This is not only one of 2020’s best albums, it’s one of the best rock records I have heard in recent years period. A beautiful, heartbreaking yet life affirming masterwork that will divide opinion but will get it’s hook in you early and will have you coming back time and time again to keep uncovering all of its secrets.

Creeper’s new album, Sex, Death & The Infinite Void is released on Roadrunner Records on the 31st of July 2020. Join the band online this evening (July 30th 2020) for a specially streamed “Creeper Con” building up to the album’s release at midnight.